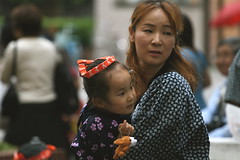 For better or worse, Japan has led East Asia's development. And this is most evident when it comes to fading fertility, writes John West.

Over the past century, Japan has experienced a dramatic decline in its fertility. Japan's fertility rate plunged from over 4 children per woman during the 1930-1950 period to around 2, where it stayed until the 1970s. It then fell below the “replacement rate” of 2.1 in 1975, gradually falling further to 1.3 in 2005, before recovering a little to 1.4 today.

Japan's experience is not unique. Fertility rates have fallen dramatically the world over reflecting changes in values and the status of women, education, industrialization, urbanization and the advent of contraception.

Nor is Japan unique in terms of having fertility below the replacement rate. Germany's fertility rate fell below 2.1 in 1971, and today is lower than that of Japan, as is also the case for countries like Greece, Italy, Spain, Portugal and Poland. In sharp contrast, Australia, France, the UK and the US still have fertility rates close to 2.

Japan is also not unique in East Asia. Several other countries have seen their fertility rates fall below 2.1 -- like Singapore in 1977, Hong Kong in 1981, Korea in 1984, and Taiwan in 1985 -- all of which now have fertility rates below Japan. Indeed, Taiwan's current fertility rate of 1.1 is the lowest in East Asia. It recovered a little from its world record low fertility of 0.9, achieved in 2010, the year of the tiger, reportedly an unlucky year in which to have a baby.

In China, where the one-child policy has been in force since 1980, the fertility rate fell from 2.8 births per woman in 1979 to 1.7 in 2012, following the sharp reduction from more than five births per woman in the early 1970s. As many mainland Chinese travel to Hong Kong (and elsewhere) to have children, they may be inflating the territory’s already low fertility rate of 1.3.

What are the main factors behind East Asia’s collapsing fertility? This is a strange trend according to evolutionary biologists. Normally natural selection produces individuals who are good at converting their resources into lots of fertile descendants.

A major reason why Japan's fertility rate has fallen so low is that as Japanese women have become more educated, they are also more interested in working, but the Japanese work environment is not very compatible with raising a family. Private and public sector careers in Japan usually involve long overtime hours, regular job and location rotation often meaning time away from the family, and lifetime employment with lots of in-house training -- things which are hardly compatible with family life.

Thus, women are often pushed to resign at pregnancy ("maternity harassment" or "mata-hara" in Japanese), and about 70% of Japanese women still do so. Many do return to the workplace after having their family, but only on "irregular" contracts which are not career-track. The net result is that some women are now choosing to have a career (and perhaps not marry) rather than a family.

But it does not have to be this way. In many Western countries, women are able to combine work and family life. But this requires a family-friendly work environment and adequate child care facilities, both of which Japan lacks. Allowing the entry of more migrants who could care for children would also help. But Japan is remarkably xenophobic when it comes to migration. So some Japanese mothers hope their husbands will be posted overseas where they can hire family help.

Another relevant factor is that Japanese men are the least active at home among all OECD countries, except for Korea. And many educated East Asian women now have a strong sense of individualism that their male counterparts have not adapted to. Potential husbands must add value to their lives, something that was not the case in the past.

The declining rate of marriage in Japan is also often attributed to the reluctance of educated Japanese girls to assume all the traditional responsibilities of a Japanese wife, namely raising the family, looking after the husband, running the household and tending to in-laws. Some prefer to stay single, live with their parents and enjoy themselves.

Even when they marry, Japanese girls now tend to do so at higher age which affects their reproductive behavior. Further, in socially conservative Asia, births out of wedlock remain taboo and rare in Asia.

It is also reported that the phenomenon of "hypergamy" is common, where educated Japanese girls will only marry men of equal or higher education or income status to themselves. And hypergamy is becoming increasingly difficult to practice since Japanese girls now achieve, on average, better education results than boys.

Some social commentators argue that Japan is suffering from a "celibacy syndrome" or "sekkusu shinai shokogun". A survey in 2011 found that 61% of unmarried men and 49% of women aged 18-34 were not in any kind of romantic relationship, a rise of almost 10% from five years earlier. Another study found that one-third of people under 30 had never dated at all.

While many commentators debate this point, it is clear that the growing economic precarity in Japan, especially irregular work, provides a great disincentive for having a family. And perhaps the shadow of earthquakes reinforces pessimism.

Many of the same factors, notably the incompatibility of work and family life, are relevant to East Asia’s other low-birth countries. Indeed, a growing number of East Asian educated women with successful careers are opting for the freedom of a single life, without children.

Soaring housing costs seems to a factor pushing down fertility in the small, tropical, and highly urbanized Chinese-speaking islands of Hong Kong, Macau, Singapore and Taiwan. Indeed, according to Belgian mathematician Pierre Verhulst, fertility rates should decline as the total population approaches on the natural “carrying capacity” of the land, which is arguably already the case in terms of congestion and pollution. And like Japan, despite being Asia’s most developed economies, these “Chinese islands” are suffering from yawning income inequality and growing poverty in the midst of prosperity, which are having an adverse effect on fertility.

The cost of education is a deterrent to child birth in some East Asian countries, none more than Korea. The country’s national obsession with achieving high grades means that vast amounts of money are spent on private education, especially for after-school tuition. In the hyper-competitive Korean society, everyone is keen to enter into a top-ranked university and then get a prestigious job, notably in a chaebol like Samsung or a government ministry,

Around three-quarters of Korean students undertake after-school education in private schools called hagwons, and many students have private tutors as well. It is not surprising that education fees should be cited as the most serious obstacle to having children in a survey undertaken by the Hyundai Research Institute.

In Singapore and other Chinese territories, including the mainland, the great improvement in women’s education is having a perverse effect on the “marriage market”, and thus fertility rates, as academic Gavin Jones has analyzed. Chinese men generally prefer to marry with a lower education and income than themselves. And well educated Chinese women are reluctant to “marry downwards”. The result is growing numbers of well-educated women and lesser-educated men who are not married.

In the case of China, it is not not clear how much of the reduction in the fertility rate was due to the policy. Countries like Thailand and Vietnam, with fertility rates of 1.4 and 1.8 respectively, have have undergone similar changes in fertility rates without a one child policy. And there is strong evidence that many families do not wish to have more than one child because of the high cost of education and housing, and other pressures of modern urban life.

One factor preventing fertility rates from falling even further in countries like Korea is the growing “marriage migration”, with China, Vietnam, and the Philippines being the top sources for Korea's migrant brides. The birth rate among immigrant mothers is higher than that of native Korean women reports Katharine Moon from the Brooking Institution.

It is estimated that one-third of all children born in Korea in 2020 (1.67 million) could be part Korean and part other Asian descent ("Kosian"), composing 3.3 percent of the total population. By 2020 and 2030 respectively, an estimated 5 percent and 10 percent of the South Korean population will be composed of foreign-born and immigrant families. There is also evidence in high migration Asian places like Hong Kong and Singapore of migrant families having higher fertility rates than the native population.

East Asia’s fading fertility is resulting in dramatic population aging. Japan’s population is already declining, and population decline is on the horizon for Korea, Taiwan and China. This is having dramatic effects on the economy, society, politics and even international relations. (Hong Kong and Singapore have compensated for fading fertility with migration, which is creating another set of social issues.)

All East Asian governments have provided various financial and other incentives to attempt to revive fertility rates. The Japanese and Singaporean governments have even had policies to encourage “dating and mating”. But none of these policies have had much effect.

At the heart of East Asia’s fading fertility phenomenon are rapid progress in the economy and education of women which has not been matched by commensurate changes in policies attitudes in the workplace, the family and society at large. One can only hope and imagine that with time and perhaps generational change over time, East Asia’s fertility rates might recover as society and social attitudes catch up to the region’s rapid economic progress. But along the way, there will be massive adjustments and costs to be borne.

- The Economic Factors for the Declining Birthrate by Naohiro Yashiro. Review of Population and Social Policy. No. 7, 1998, 129-144.