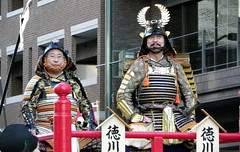 Japan’s gross public debt has skyrocketed from 70% of GDP in 1992 to 226% in 2014 following twenty-two years of budget deficits, reports the OECD. And the main driver has been the doubling as a share of GDP of public social spending, most of which goes on pensions, long-term care and health for senior citizens. Social spending now accounts for more than half of Japan’s general government spending.

Looking ahead, unless something is done, Japan’s public debt could be heading over 400% of GDP by 2040! Some say that this is no big deal. Some 90% of public debt is held by Japanese institutions, and with low interest rates, the servicing of this debt is not such a great burden.

But the OECD is quite rightly worried that at some point markets could lose confidence in Japan. Interest rates could shoot up, adding further to the budget deficit and debt. Although loyalty is a prized Japanese virtue, it may not last forever among Japanese investors. This could lead to capital flight.

Japan desperately needs a “plan” to bring its debt under control. This would help reassure financial markets. But it must also seriously implement the plan, something which it has been loathe to do in the past. This plan must include increased consumption taxes. Japan’s government revenues are very low, only around 30% of GDP, while most European countries with aging populations have revenues in the 40-50% of GDP.

It is also necessary to bring public social spending under greater control. Lifting the retirement age (currently 65 for men and 63 for women) for receiving public pensions would be a great help. This should be no great burden since Japan still has the world’s highest life expectancy at 81 for men, and 87 for women.

There is also much that could be done to cut back on public health expenditure. Japanese seniors spend enormous amounts of time in expensive hospitals, but often for long-term care rather than medical attention. It is a waste of money to use expensive hospitals as hostels for seniors who are looking for sociable company. And the cost of pharmaceuticals could also be cut back by greater use of generics, for example.

At the same time, Japan’s working age population has been suffering from growing social problems over the past few decades, which have not been adequately addressed by the government. There has been a widening gap between rich and poor, and also growing poverty. Japan’s relative poverty increased from 12.1% in 1985 to 16.1% in 2012, the sixth highest among the advanced OECD countries, driven by a rise among the working age population. Regrettably, some 16.3% of Japan’s children, the nation’s future, live in poverty.

These adverse trends are due to the growing trend of “irregular employment”, meaning fixed-term, part-time, and “dispatch workers” (those sent from private employment agencies) who earn much less than permanent workers. Irregular employees also receive less training and social benefits than permanent employees. And their lower income also discourages marriage, and is one factor behind the nation’s low birth rate. While reducing social assistance to Japan’s seniors, the government should do more to address the social problems of its working age population.

Japan is an “intergenerationally unjust” country, ranking the second worst after the US among 29 advanced OECD countries, according to a study by Germany’s Bertelsmann Stiftung, that looks at its environmental, economic-fiscal and social aspects. The study assesses unfair burdens of policy outcomes and their legacies for future generations, and examines the extent to which current socio-economic policies reflect a bias toward today’s older generation.

Not surprisingly, Japan ranks the worst of all 29 countries for its public debt. Each Japanese child (between 0 and 14 years old) bore a crushing $794,000 in public debt in 2011. The burden of Japanese children is more than 2 ½ times that of Italy and Greece, the next two worst cases. Japan also scores poorly for other criteria like the strong bias of public social spending towards the elderly, and child poverty which restricts future economic and social opportunities.

In other words, Japan has been maintaining its wealth and prosperity at the expense of its children and succeeding generations. How could a country like Japan which, to outside Western eyes, seems to have such a cohesive society, be one of the world’s worst countries when it comes to socio-economic justice between generations?

Japan’s intergenerational injustice is a product of the country’s “silver democracy” or gerontocracy, in the view of economists like Alexandra Harney and Naohiro Yashiro. In other words, Japan’s large senior population have a large and dominant voice over the nation’s politics.

The share of Japanese voters over 60 years old has more than doubled to 44% over the past three decades, while the share of voters in their twenties has fallen from 20% to 13% since 1980. This effect is magnified in rural areas, which have smaller population sizes and are dominated by senior citizens. And lastly, senior citizens, who know very well their interests, also have a much higher voting turnout than younger citizens.

In short, this means that it would be electoral suicide for any government to propose a substantial cutting of benefits for seniors, especially if more benefits were to be allocated to the working age population suffering from poverty and inequality.

Many ideas have been put forward to address these issues. Political leaders could appeal to youth to become more involved in politics. The education system could seek to promote greater political literacy among youth. Leaders could undertake a campaign to better inform seniors of the issues at stake, and appeal to their reason and altruism. Electoral boundaries could be redrawn more fairly to reduce the influence of seniors in rural districts. Voting rights could be allocated to parents by the number of their children.

But advancing any of these ideas would take great political leadership, something for which Japan is not well known. It is difficult to see Prime Minister Shinzo Abe investing himself in such a campaign, when he is fully occupied by security issues and Abenomics. The other fundamental problem is that any changes to Japan’s silver democracy would require the agreement of the country’s seniors, something which is unlikely in Confucian Japan where seniors take themselves very seriously!