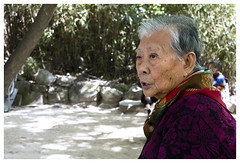 Korea is a wealthy country, with a proud Confucian society. And yet half of its senior citizens live in poverty, and suicide among the elderly is rising sharply. Shame on you Korea, says John West.
Over the past half century, Korea has had the fastest-growing economy among the advanced OECD countries. Looking ahead, the OECD projects that population aging in Korea will also be the fastest in the OECD area.

First of all, life expectancy has increased dramatically, from a mere 53 years in 1960 to over 81 years in 2012, according to World Bank data. Growing prosperity means improved nutrition and hygiene, access to clean water and sanitation, and above all education and health services. And as life expectancy increased, the share of older persons in the Korean population has grown. This is the very positive aspect of population aging. Koreans are living longer lives.

Over the same period, Korea's fertility rate has fallen dramatically, from 6.1 births per woman in 1960 to less than 1.2 today -- the lowest fertility rate of all the OECD countries, and well below the "replacement rate" of 2.1.

Why is Korea's fertility rate so low? Many factors are at play. First, as countries modernize, access to birth control instruments increases. And with education, citizens tend to exercise more choice over family size and life’s various options. History shows that these factors tend to reduce fertility rates towards the replacement rate.

But in Korea’s case, there are other factors that have pushed its fertility rate below replacement. Its national obsession with education performance, including expensive after school tutoring, means that having children is very expensive. Korea's horrendously long working hours leave little time for family life. And Korea's macho work culture means that it is very difficult for women to combine work and family life. When a woman has her first child, it is very difficult for her to continue her career -- such that Korea's very well educated women often must choose between work and family life.

This has become a major national issue in Korea. According to one estimate, if this trend continues, Koreans could be extinct by the year 2750. But while the government has undertaken many initiatives to increase the birth rate, there has been little effect to date. Deeply ingrained social customs and attitudes are difficult to change.

There is much that can be done to respond to the challenge of Korea's aging population, beyond measures to increase the birth rate. This includes raising the retirement age, providing more opportunities for women and seniors to participate in the workforce, and opening up to immigration. But there is a need for much greater efforts than seen to date. In particular, few senior citizens work today.

Improving productivity is another important measure for maintaining prosperity in an aging society, especially to pay for retirement and health benefits of the country’s growing senior population. However, there will be a need for much deeper structural reforms like greater opening to international trade and investment, deregulation, and better corporate governance.

The prospective sharp aging of Korea's population is colliding with other adverse social trends, namely growing inequality and rising poverty. In the early decades of Korea’s development, it managed to combine rapid economic growth, with a fair sharing of the benefits. Indeed, the Gini coefficient measure of income inequality declined between 1980 and 1997. But this trend has reversed following the Asian financial crisis of 1997/98, reports the OECD.

Korea’s income inequality, the gap between the poor and the rich, is now the tenth highest of the 34 OECD countries and is well above the OECD average. And some 15% of Koreans now live in “relative poverty” (meaning the share living on less than half the median wage). This has squeezed Korea’s middle class, which has dropped from 75.4% of the society in 1990 to 67.5% in 2010.

The main factors driving inequality and poverty have been: globalization; technological change that favors skilled workers; a growing share of workers with precarious jobs; population aging; and the very low public social spending which is less than half the OECD average. Also, Korea has a winner-takes-all society where those working for the chaebol family conglomerates do very well, while most others live like second class citizens.

As troubling as these trends are, what is most troubling is that Korea’s elderly population is being hit the most. The OECD reports that in 2011 some 49% of the population aged 65 and over lived in relative poverty, more than three times greater than poverty rate for the nation as a whole. This is in sharp contrast to the OECD area as a whole where relative poverty for the elderly is about the same as for the overall population.

What’s worse is that some 26% of the elderly population are estimated by the Korean government to be living in “absolute poverty”, meaning that they cannot satisfy their basic human needs.

Many elderly persons had assumed that their children would provide for them in the traditional Confucian manner. But over the past 15 years, the percentage of children who think they should look after their parents has shrunk from 90 percent to 37 percent, according to government polls, even though their parents may have invested greatly in their education. Confucian filial piety is now a waning phenomenon. Perhaps the Korean government should follow China in establishing “Confucius laws” which require children to visit or provide for their elderly parents.

So increasing numbers of elderly Koreans are now turning to Christian charity, as they line up outside churches for handouts of cash or food. And violent crime by Korea’s elderly is also rising sharply, according Korean police statistics. This is put down to poverty, illness and loneliness. With three-quarters of Korea’s elderly poor now living alone, this is hardly surprising.

Increasing poverty among the elderly has contributed to a more than doubling of suicide amongst this group over the past decade -- from 34 per 100,000 persons in the year 2000 to 72 in 2010. The suicide rate among the Korean elderly is the highest in the OECD area, with the suicide rate of elderly men being double that of women.

In short, the high poverty rate for Korea’s elderly population is a major and urgent social problem, which will only get worse in the decades ahead unless something is done. Successive governments have been slow to create an old-age income support system that is necessary in a modern society. The current system provides only paltry benefits to the country’s elderly, and is totally inadequate for dealing with the elderly poverty. The new Basic Pension is useful, but not sufficient. The old-age income support system needs a complete overhaul, including increasing taxes, to deal with not only today’s challenges, but also to prepare for the country’s prospective “silver future”.

The great shame of Korea’s demographic trends is that the generation that created the country’s economic miracle is now suffering, and is unable to enjoy the benefits that they so richly deserve. Most of those living in poverty today were reportedly comfortable and prosperous in their careers, and have since fallen on hard times through the tumultuous changes transforming Korea.

The Global AgeWatch Index, which ranks countries by how well their older populations are faring, puts Korea at the lowly position of 60th out of the 96 countries covered, way behind Japan at 8th and even the Philippines at 50th and China at 52nd. If Korea does not get its act together, its inability to manage the challenges of its aging population will result in not only a broken society, but also a broken economy. This would be a sad ending to the “miracle on the Han River”.