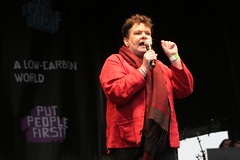 The international trade union movement warned the OECD Forum 2015 that the world's workers face a security crisis.
Inequality is squeezing families and choking growth according to a new poll from the International Trade Union Confederation released at the OECD Forum 2015 in Paris, the annual meeting of high income developed economies.

“Income generates demand. Income enables economic participation and protects and increases jobs in all sectors, and income creates social cohesion. Instead governments and international institutions are not changing the business model that drives profits up but won't pay a minimum living wage of $177 a month in Cambodia or $120 in Bangladesh,” said John Evans, General Secretary, Trade Union Advisory Committee to the OECD.

“The global economy is stagnating, workers and their families are struggling and inequality is rising, yet world leaders and international institutions continue to ignore a large slice of the solution - wages and social protection,”

‘’The OECD ministerial council needs to address income, investment and inclusiveness to stop a workers security crisis. The threat is income security – with 55 % of people from nine countries representing half the world’s GDP describing their finances as stagnating or going backwards,” said Sharan Burrow.

In producer economies, where millions of workers could be the drivers of growth, low incomes and insecure jobs in supply chains dominated by multi-national companies with their headquarters in OECD countries are failing the global economy.

In three main producer countries, Indonesia, the Philippines and Turkey which together export more than $400 bn of products to the global economy, 66 % of people reported in terms of their personal financial situation they are struggling or just getting by.

· half of all workers say their job has become more insecure in past 12 months;

· 58 per cent expect someone in their family will lose their job in the next 12 months;

· and 63 per cent say they are stressed about their job and wage security.