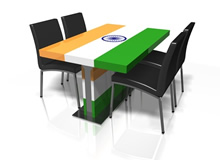 How to tackle the skills mismatch in India, based on a "company-driven approach", is the agenda for this conference, which will bring together business and government leaders from India and Germany.

These decision-makers will be working to strengthen the "skilful partnership" between these two economic heavy-weights. This event is part of a joint initiative of the Bertelsmann Stiftung and Infosys, whose teams will be led by Deputy Chairman Liz Mohn, and Executive Chairman N.R. Narayana Murthy respectively.

The highlight of this "skills summit" will be an address on 7 February by the Federal President of Germany, H.E. Joachim Gauck.

Germany's strongly growing trade relationships in Asia, along with its leadership role through Europe's sovereign debt crisis, only serve to highlight the great underlying strength of Europe's biggest economy. A key ingredient in Germany's successful economic model has been its "dual vocational training system".

India has demonstrated its immense capacity for rapid economic catchup these past couple of decades. And looking ahead, India can reap the benefits of a demographic dividend, thanks to its rapidly growing youthful population. But these opportunities are hampered by persistent skills gaps. Barely 2 per cent of the Indian workforce has formally acquired skills and only another 2.4 per cent of workers have some technical education.

What lessons could India learn from Germany in the area of skills development?

But drawing on the lessons from Germany requires substantial investments by both government and business, along with training trainers, developing corporate networks in vocational education and training, and close public-private cooperation.

Despite the many lessons that Germany's experience has to offer, India must of course design policies which respond to its specific situation. One size doesn't fit all.

Moreover, this meeting will be a rich dialogue, not a monologue. Even a country as advanced as Germany has much to learn from India's globe trotting companies like host, Infosys.

And more generally, better cross-cultural understanding is the key to successful economic and political cooperation in the globalising world economy, in which both India and Germany are driving forces.

This conference, and its follow up, promise to strengthen foundations for mutually beneficial cooperation between India and Germany, a partnership which is already strong with Germany being India's most important European trading partner.

ACI Executive Director John West will be moderator of this conference.