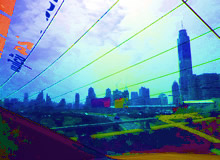 Art Stage Singapore, "We are Asia"

As someone who has lived in both Hong Kong and Singapore, it’s always fun to watch the two city-states compete, vigorously, on almost any playing field imaginable – sports, business, scholastic results, who has the better cuisine etc… And now, with the explosion of interest in Asian contemporary art, we are seeing both cities vie for the mantle of Asia’s art hub.

Last week I had the opportunity of attending the 4th annual Art Stage, Singapore’s leading Art Fair. The overall theme this year was “We are Asia”, making clear it’s aspirational goal. And, I have to say, they pretty much delivered on that promise.

There were over 150 galleries that participated in the fair, more than 80% of which are based in Asia. Having this level of concentration on a single region made it a really good opportunity to get at least a bit of an overview of art practices and trends in some of the national art scenes occurring in Asia today. The work ran the gamut from photographic, sculptural, installation, video, outsider art, found art, conceptual, abstract etc. Some really impressive, innovative pieces and styles.

What was getting a lot of attention this year was the introduction of eight “platforms” which were set up in different areas of the fair and were somewhat set off from the commercial gallery booths around them. Taking up about a fifth of the overall floor space of the art fair, each of these eight exhibition spaces featured a curated group of artists’ work from a specific country or sub-region within Asia (Australia, South Korea, Japan, India, China, Taiwan, Southeast Asia, Central Asia).

In some cases the curators of these spaces are leading lights in the Asian art world. For example, the fantastic Japan Platform was curated by Mami Kataoka from the MoriArt Museum who spoke last year at the Art Gallery of Ontario in Toronto. And Huang Du, the Beijing-based art critic, oversaw the China platform. I was pleased to meet up again with Erin Gleeson of Sa Sa Bassac, who brought Cambodian artist Lim Sokchalina’s work to the Southeast Asian platform. I showed Lim’s work at the East Gallery in our Contact Photography Festival show ‘Between Fantasy and Reality’ in 2012.

There are a number of benefits of this “Platforms” concept. According to Art Stage Director Lorenzo Rudolf, the former head of Art Basel Miami Beach, it introduces an educational component to the art fair which helps to expand local art appreciation and build the market among the Asian visitors rather than just selling art to those who are already art lovers. I found that these spaces provide a bit of respite from the full-on commercial aspect of the gallery booths. And they allowed smaller galleries, and those from off the beaten path, to exhibit their artists in a more open and imaginative environment.

The talks and panel discussions were for the most part well done. I especially enjoyed one called “Southeast Asian Shows Go Global” which featured Uli Sigg, one of the original and largest collectors of Chinese contemporary art, along with leading Indonesian artist Entang Wiharso and Lorenzo Rudolf, the art fair director himself. All the panelists agreed that the art world is becoming more decentralized with the rise of secondary markets and that Southeast Asia’s time has definitely come.

Overall, there was a real buzz at this art fair which I sometimes find missing from other fairs I have been too. With the breadth and depth of participation from galleries around the region, I really do think that it deserved its moniker – “We Are Asia”. While Art Basel Hong Kong can lay claim to be the leader in terms of showcasing Chinese contemporary art, the Singapore art fair wins hands down for the Southeast Asian category. At least for now.

I am already looking forward to Art Stage 2015.

About Andrew FitzGerald and Claudia Blume, the owners of the East Gallery

Andrew FitzGerald and Claudia Blume lived in a variety of countries in Asia for more than 14 years.

While Andrew worked in the international banking industry, Claudia was a journalist for international media, as well as a consultant for aid organizations. They first fell in love with contemporary Asian art when they moved to Vietnam in 1995 and since then have spent a lot of time exploring local art scenes across the region.