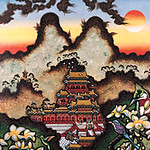 Shangri-La is a place of dreams, created by author James Hilton. in his 1933 book, Lost Horizon.

Do you feel like escaping to Shangri-La? An earthly paradise, a mythical Himalayan utopia, where people live hundreds of years in peace and tranquility. With the world as it is today -- war in Ukraine, COVID still spreading, inflation and economic troubles lurking -- who would not wish to escape to Shangri-La.

Shangri-La is a fictional place in Asia's Kunlun Mountains, which was created in the 1933 novel, Lost Horizon, by English author James Hilton. The plot is quite extraordinary and engrossing. Four Westerners are being evacuated from British India, due to civil unrest. But the plane is hijacked and they end up in remote Tibet, at a monastery called Shangri-La. Hugh Conway, a British diplomat and lead character, becomes enamored with Shangri-La, while two of other captives are also seduced.

But will Shangri-La be the heavenly paradise that they imagine? I leave it for your dear reader to discover for yourself.

The book has been adapted for film three times. I watched the 1937 version, directed by Frank Capra, for which the link is below.