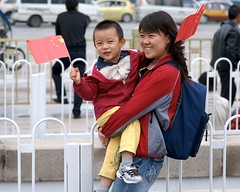 Changes in China’s birth control policies do not address real concerns, writes John West.
With its birth rate and working age population declining, China recently transformed its two-child policy into a three-child policy. By lifting this restriction, it is hoped that Chinese families will be encouraged to have three children and counter the negative effects of China’s rapidly ageing population. But back in 2015, when the Chinese government transformed its one-child policy into a two-child policy, there was little impact on China’s birth rate.

As it stands, China is becoming old before it becomes rich in terms of GDP per capita, and its rapidly ageing population is dragging its economy down and imposing great costs on the national budget. China’s efforts to address this issue by reforming birth control have not been successful. How did China get itself into this “demographic pickle”? What should it do to navigate this complex problem?

China’s great leader Deng Xiaoping is revered for his role in opening the Chinese economy to the world. But under his watch, the Chinese government was also responsible for the appalling Tiananmen Square massacre and also the implementation of China’s infamous one-child policy.

Population has long been an issue in China. Chairman Mao once famously said “The more people there are, the stronger we are.” But Deng and his experts thought differently, even though China’s fertility rate had already fallen from 5.8 children per woman in 1970 to 2.8 in 1980 thanks to softer efforts to encourage fewer births. So in 1980, they implemented China’s infamous one-child policy.

Like everything in China, the one-child policy was never implemented uniformly across the nation. Single women are still not allowed to have a child outside of wedlock. Against that, many people were long allowed to have two children, such as ethnic minorities like the Tibetans and Uighurs, rural residents whose first child was a girl and couples where both parents are only children. This means that the strongest population growth has occurred among groups with the worst access to education and health services – not a good sign for China’s economic future.

In short, the one-child policy mainly applied to urban dwellers. But even here there were always inequities. Families who violated the one-child policy law were subject to fines (social maintenance fees), which the wealthy could usually afford to pay despite their arbitrary method of calculation. Another way around the system has been “birth tourism” whereby pregnant Chinese women travel to Hong Kong or the US (Saipan is the closest US territory to China, and Chinese citizens did not require a visa to travel there).

Since poor people could not afford to pay fines or travel overseas to give birth, they were often subject to horrendous forced abortions, sterilisation, contraception and other draconian acts by the family planning agency. According to one estimate, there were 336 million abortions, 196 million sterilisations and 403 million intrauterine devices inserted in the four decades from 1971 in China. There are also many stories of “hidden children” (some 13 million were recorded as lacking birth registration in the 2010 census), transferring excess children to childless couples, infanticide and about 100,000 adoptions by Western families.

There is much debate about the real impact of the one-child policy. Official experts claim that it reduced China’s population (today around 1.4 billion), by some 400 million. It is more likely that it only reduced China’s population by about 100 million, a decimal point in such a large country. As Nobel Prize-winning economist Amartya Sen has argued, China’s fertility rate would likely have continued its downward trend in tandem with economic development, urbanisation and education. Most other East Asian countries have fertility rates around the same as China’s 1.3 children per woman, without ever implementing such a draconian population policy.

The Chinese government’s decision to transform its one-child policy initially into a two-child policy and now into a three-child policy are positive steps in terms of improving women’s reproductive freedom. But it is a case of too little too late. Many Chinese urban-dwelling women now prefer to have just one child. In fact, the evidence following the move to a two-child policy reveals an initially small increase in birth rates, followed by a small decline.

But this means widespread reforms, not just family planning, to address its demographic challenges. With a working age population that has been declining for a decade, the government should be implementing market-oriented reforms to boost productivity. Unfortunately, policy has been moving away from market measures, and productivity growth has been slowing for a number of years. China needs to move more decisively from words to action in raising the retirement age from 60 years for male workers, 55 years for female cadres and 50 years for female workers, even in the face of popular resistance. Much greater opportunity should be given to women to contribute to the economy and society. China ranks a poor 107th out of 156 countries surveyed in the World Economic Forum’s Global Gender Gap Report. China will have to give serious consideration to immigration, as surreal as that might seem in a country with such an enormous population.

While a sudden increase in fertility will not solve China’s demographic dilemmas instantly because for the first 18 to 20 years of their lives, children are dependent on the economy, rather than being contributors. Over time, a rise in the fertility rate to the “replacement rate” of 2.1 children per woman is very important. But to do this requires addressing many of the issues that are regularly raised by Chinese families – like the high cost of China’s very competitive education system, and the cost of housing, especially in China’s megacities like Beijing, Shanghai and Guangzhou. Moreover, workplaces need to become more “family-friendly”, supported by affordable childcare, in order to allow Chinese women to combine work life and family life, rather than having to make a choice between the two. According to opinion polls, the move to a three-child policy will not by itself lead to much of a boost in birth rates.

China is perched on a demographic precipice. If it does not act decisively and aggressively address its ageing and declining population, it will severely undermine not only its economy, but also its ambitions for global leadership. And if China aspires to have a humane society, it should abolish all birth controls and their associated violation of sexual and reproductive rights.

This article by John West was first published by the blog Unravel on 10 August, 2021.