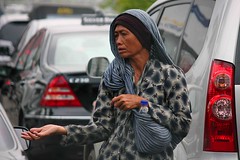 Indonesia has one of Asia's most unequal societies, and it is costing the country dearly, writes John West.
When I recently visited Indonesia, everyone spoke to me of the country's inequality problem. Whichever way you look at it -- income, consumption or wealth -- the rich are doing very much better than the rest of society.

As the World Bank notes,

"Indonesia stands as an increasingly divided country, unequal in many ways. There is a growing income divide between the richest 10 percent and the rest of the population, and this gap is driven by many other types of inequality in Indonesia.

People are divided into haves and have-nots from before birth. Some children are born healthy and grow up well in their early years; many do not. Some children go to school and receive a quality education; many do not. This means that some young adults enter the workforce with the right skills that are increasingly needed and rewarded in today’s modern and dynamic economy; most do not and are trapped in low-productivity and low-wage jobs.

Some families have access to formal safety nets that can protect them from the many shocks that occur in life; many do not. And a fortunate few Indonesians have access to financial and physical assets (such as land and property) that increase their wealth over time. This wealth is passed down from generation to generation, both in the form of money and physical assets, and through greater access to better health and education. As a result, inequalities are being compounded and deepened over time."

At the same time, some degree of inequality can be a good thing, as successful people are rewarded for hard work, risk taking or innovation. But there are limits. Excessive inequality can weaken the economy as the poor have less capacity to invest in education and health. It can also curtail poverty reduction, fracture society, lead to social and political tensions, and foster political populism.

What is the evidence for Indonesia's rising inequality?

According to many indicators, inequality in Indonesia has increased substantially, as in most Asian countries. Indonesia is now one of Asia's most unequal countries, with the benefits of economic growth being enjoyed by relatively few Indonesians. And not only is inequality high, it is one of the fastest rising in Asia.

One spotlight on inequality is provided by the following statistic. While the richest 10% of Indonesians consumed as much as the poorest 42% in 2002, by the year 2014, this figure had shot up to 54%, as the country's poor were left behind.

The classic indicator of inequality is the “Gini Coefficient”. For much of the 1980s and 1990s, Indonesia's Gini hovered between 30 and 35. But over the past decade, it has gradually risen to around 40, where it is today. But even this may be an underestimate, as statisticians are not able to pick up many of Indonesia's richest households, and much of the country's ill-gotten wealth is hidden away. Indonesia is consistently ranked a very corrupt country by Transparency International, which puts it the world's 96th cleanest country in survey of 180 countries.

What are the causes of inequality?

There are four main drivers of inequality, according to the World Bank:

At least one-third of inequality would be due to "inequality of opportunity". This means that children get a poor start in life. Some 37% of Indonesian children suffer from stunting (one of the very highest in Southeast Asia) because of poor nutrition and health conditions in the first 1000 days of life, which adversely affects their cognitive development for their whole life. And while school enrollment rates for poorer children have improved, they usually don't receive the same quality of education as well of kids of rich families. Overall, it's not surprising that Indonesia has some of the very worst international test scores in mathematics and science for 15 year old students.

Family circumstances are also a factor. For example, poorer families tend to have larger families, which means that resources are spread more thinly. But inadequate public services are also important, especially in the areas of health care, immunization, clean water and sanitation.

Job inequality is the second inequality driver identified by the World Bank. A small share of Indonesian workers are high-skilled and in the formal sector of the economy, while most workers have low skills, and are trapped in low-productivity, low-wage jobs in the informal sector. And as technology and globalization advance rapidly, opportunities increase and wages rise for skilled workers, leaving low-skilled workers bypassed by progress.

Indeed, Indonesia is suffering from a shortage of skilled workers, reflecting the weakness of the country's education system in preparing students for the world of work. But less than 1% of youths aged 19-24 years old have attended training courses in engineering, IT or languages. And there are few on-the-job learning opportunities since most firms are SMEs for which training is simply too costly. Indonesia's labour market regulations, especially for severance pay and high minimum wages above productivity levels, also discourage formal sector employment.

The third factor driving inequality is the high concentration of financial assets -- sometimes acquired by corrupt means, nepotism or by taxation systems that favour the rich -- in the hands of few. Indeed, the richest 1% own half of all the country's wealth, the second highest level (along with Thailand) after Russia in a survey of 38 countries by Credit Suisse.

The income accruing to these assets further drives inequality -- especially since national income accruing to capital is rising at the expense of labour’s share, and taxes raised from capital income are much lower than those of labour income. But there are other effects. Inequality results in underinvestment in human capital (health and education) by poorer people. And inequality can facilitate elite capture of the country’s economic and political institutions, which can further stack the cards in favour of elites.

And lastly poor and vulnerable households are disproportionately affected by shocks like unemployment, food price hikes, illness and disease, and natural disasters, which adversely affect their income as well as their investments in education and health. Fewer than half Indonesians have health insurance.

How to reduce inequality?

High inequality is not inevitable, and there are obvious things that governments can do to tackle adverse effects of inequality, based on the analysis of its causes. It is indeed critical to break the intergenerational cycle of inequality.

Improving the delivery of public services like health, education, family planning, social safety nets, and infrastructure can reduce the inequality of opportunity. Skills training and regulatory reform, along with better infrastructure and investment climate, can minimise the inequality of jobs. Tackling corruption and a fairer taxation system can moderate the excessive concentration of wealth. Better government policies can reduce the severity of shocks, while social assistance and social insurance can enhance the resilience of Indonesia society.

But is the Indonesian government serious about tackling inequality?

Inequality was a major issue in the 2014 presidential election, and will no doubt be so again in 2019. The government is making the rights noises, and is taking some initiatives like its programme against child stunting, and increasing spending on public health, which had been extremely low.

But following Indonesia’s Big Bang decentralisation, the delivery of public services is mainly in the hands of local governments, which suffer from capacity shortcomings, which limit their ability to improve service delivery. They need to be held more accountable for their work.

Further, serious measures to tackle inequality, notably by improving health, education, social safety nets and infrastructure, will require more government spending, and thus increased taxation revenues. But the Indonesian government does not collect enough. Total tax revenues represent only 12% of GDP, much lower than countries like Malaysia (15%), the Philippines (17%), Turkey (25%) and Brazil (32%). Tax-cheating is rife by the nation’s wealthy, who also benefit from many tax loopholes, and who lobby against increased taxation.

In other words, Indonesian politics is the real reason why Indonesia has such an inequality problem, and why this problem will remain intractable. And these politics are complex, as many wealthier Indonesians are opting for private, rather than public, health, education and other services. Thus, they cannot be expected to be either strong proponents for better public service delivery, or supportive of increased and fairer public spending on these services, funded through more taxation.