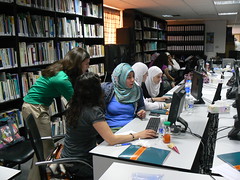 Dareen Al-Khoury has shared with us a view from Jordan on satire and youth political participation.
Amid a plethora of genre choices ranging from documentaries to comedy, a highly popular form in society today includes political satire comedy; this genre is presumed to have had an important effect on society and to have changed the political landscape and news media in many ways (Waisanen, D. J. 2009).

Satire is a form of humour, but it is humour that is used in a very specific way. Experts have defined it as a display of humour which exposes human failure in a manner that may be bitter and/or stinging with critical words often meant to ridicule, and frequently with a purpose of constructive social criticism (Morris, L. A. 2007; Forbes, W. A. 2010; Doyle, G. 2006). Comedians are fancied for filling the role of watchdogs for the watchdogs: traditional media workers who are expected to be watchdogs for society (Dinovella, E. 2012).

Satire has been acknowledged for fostering the media’s role within democracy of exposing corruption, constructing space for political debate and encouraging public virtue (Holbert, R. L. 2013). However, researchers have argued that the negative images and implications that are supposedly prevalent in satire may play a role in fostering cynicism (Edwards, J. 2001).

My research aimed to investigate whether satirical content can be considered a factor that fosters civic mobilisation towards political participation in Jordan. The study was designed to examine the effect of satire on youth (ages 18-30) political participation in Jordan by employing a comprehensive literature review, theoretical considerations including the media effects approach, The uses and gratifications theory, and The incongruity theory as well as the survey and focus groups research methods.

This research contextualised the study by taking into consideration the local perspective and focusing on Jordan, a transitional democracy with a unique tribal structure that affects the local political system. It also has a youthful society, with 70% of the population under the age of 30 and with high access to technological means and online connection.

I. To examine relations between different factors that can potentially intervene in the consumption habits of political satire in affecting the political participation of youth in the Jordanian context.

II. To expand the study of the impact of satirical media by broadening the research to include not only effects on attitude, knowledge and behaviour, but also the perceived effectiveness of satire by youth in Jordan.

III. To examine the comprehension and tolerance of Jordanian youth in regard to satire media content, building on the ‘incongruity theory’ and ‘uses and gratification theory’.

The results of the research presented strong links between the specific variable of gender, as male interest in satirical content reached 83.3% compared to 62.2% of female respondents, while regarding age, no significant results were revealed between the three categories of age groups. Education could not be analysed properly in this research because despite the fact that the questionnaires were distributed to a wide range of youth, 95.8% of those who responded reported being students or graduates with a higher education degree. Interest in satirical content reached 72% among this group, and the same applies to media habits: 97.2% of the participants reported using Facebook on daily basis, limiting possible findings in regard to the relation between media consumption, satire consumption and political participation.

A new variable arose in this research, stating that free time might be a factor in the use of satirical content. Youth in the south and the north who have fewer opportunities to engage in extracurricular activities and fewer activities beyond attending university or going work, as well as those who are unemployed, have reported significantly higher percentages of satirical consumption.

The local view of the perceived effectiveness of Jordanian youth to satire, corroborated some previous studies, but opposed another in the field. Some participants argued that satire is a useful primary source of information for the unengaged and provides an alternative point of view to those who follow politics. However, others contested that satire can be negotiable; while it does reflect reality, that reality might not be based on proper research and information.

73.6% of respondents replied that satire plays a role in improving youth’s understanding of politics, while in the focus groups, many participants asserted that the effect on opinion may mostly be dependent upon the background of the individual, adding that if the individual has no strong knowledge, satire can affect their opinion. Some participants also mentioned age as a factor, believing that a younger audience is more likely to have their opinions influenced by satire. Participants further focused on the negative impact of satire, and expressed that exposure to such content can compound the existing frustration and lack of trust towards politics in the country.

While 61.8% of respondents expressed that youth are likely to seek further information after consuming satirical content, most participants in the focus groups said that youth would not seek more information, explaining that those who follow satire desire quick information and therefore have no intention of pursuing further knowledge. Some also added that satire is the situation ‘as we know it’, and thus the information it provides is sufficient.

Participants in the three focus groups from the three regions seemed to believe that if their mind is set regarding whether or not to vote, satire would not affect their decision. Their responses reflect substantial cynicism towards the political system as a whole; they believe that satire might be the only outlet for venting, but it is not enough of a force to convince audiences to change their decisions to vote.

Participants in this research have demonstrated strong comprehension of the purpose of satire. They have expressed awareness of the role of satire in criticising the ills of society in a humorous and simplified manner, which could expose corrupt decision makers and systems.

Participants have unanimously suggested that it is not a lack of comprehension that could produce conflict, but rather a mockery of specific topics. While recognising the importance of freedom of speech, participants were collectively in favour of setting limits on which topics journalists can mock, such as those related to religion, people under crisis and national security, in order to avoid fostering tension and possible national conflicts.

Employing existing literature and this study, several paths for research can be suggested to further analyse the role of satire and its effect on society. The first area, is by expanding the sample to include the elderly, youth with lower educational backgrounds and citizens who exhibit diverse media habits, which could present additional findings and advance knowledge and connections between variables. Capturing the viewpoints of those who create media content could further nuance the topic. Forthcoming studies may also wish to expand across different countries to study the variables involved in the aptitude and consumption of satire, which may vary from one country to another and present additional insights in the field.

Dareen Al-Khoury's research was conducted in the context of her studies for an MA in Communication Media and Advertising at Leicester University.