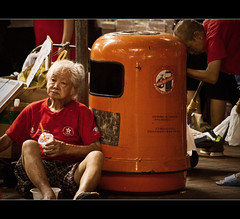 Hong Kongers are miserable, and Beijing should be worried, writes John West.
Hong Kong, Singapore and Shanghai are three of Asia's richest cities, with some of the world's highest life expectancies. But Hong Kongers are miserable, compared to the relative happiness of residents from the other two cities, according to a recent report by Civic Exchange, a Hong Kong-based think tank.

The gap between Hong Kong, Singapore and Shanghai in reported well being is striking. For example:

-- Some 70% of Hong Kongers believe that their city has become a worse or much worse place in which to live since they started living there. Only 11% of Shanghai residents and 9% of Singapore residents have the same feeling about their cities.

-- And it's young Hong Kongers who are most likely to say that their city has become worse, with 79% in the 18-29 age cohort saying so.

-- Some 66% of Hong Kongers claim that their city is "not so good" or "not good at all" a good place for children to grow up in. Once again, Shanghai and Singapore had much lower negative feelings on this count, with scores of 17% and 12% respectively.

-- Not surprisingly, Hong Kongers have the lowest mean satisfaction of the three cities. Their main concerns are housing, quality of government, education and environmental protection.

-- Both Hong Kongers and Singaporeans are much more worried than Shanghainese about poverty in their city, and providing for their family's needs.

-- And some 42% of Hong Kongers would move away from Hong Kong, if they could choose to live anywhere in the world. Only 17% of Shanghai residents and 20% Singapore residents would like to "jump ship". Interestingly, the most popular destinations are Australia, Canada, Europe and the US -- not the other cities in this survey.

This excellent survey by the Civic Exchange does not, unfortunately, provide any more evidence to help us understand the profound feelings of negativity by Hong Kongers towards their city.

But these reported well being indicators certainly square with most other studies and anecdotal evidence, and most notably with the social unrest in recent years from "Occupy Central" and the "Umbrella Movement". Hong Kong suffers from high inequality and poverty, very expensive housing costs, and low wages and poor opportunities for island's youth.

In short, Hong Kongers are deeply unhappy and distrustful of their government. It is not surprising that there should be a growing number of Hong Kong's youth who do not want the island to return fully to Chinese control in 2047, and would even like the former British colony to become independent.

Civic Exchange, the think tank that conducted this research, hopes that the Hong Kong government will be able to glean a better understanding of the concerns of the territory's citizens. But it is really Beijing who should study this report the most closely.

Under its "new emperor", Xi Jinping, China would clearly like to be respected as a "great power". But it has been making many more enemies than friends, most notably in Hong Kong.

China needs to have a deeper understanding of all the peoples in its neighbourhood to earn their genuine respect. And this little report by Civic Exchange makes an important contribution in this regard.