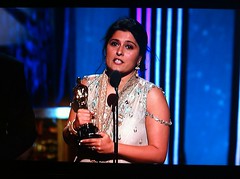 The Oscar-winning short film, "A Girl in the River: The Price of Forgiveness", will hopefully increase pressure to put a stop to "honor killings" in Pakistan, India and elsewhere, writes John West.
So-called "honor killings" are an abominable fact of life in Pakistan, India, and many countries from the Middle East and North Africa. And there is a growing number of cases in Western countries like the US, UK, Canada and Australia, in tandem with the increasing numbers of migrants from these regions.

What exactly are honor killings?

The most typical example occurs when someone (usually a young woman) is deemed to have brought dishonor on a family by marrying a person of lower caste or status, refusing to enter into an arranged marriage, having sex outside of marriage, being a rape victim, or even dressing inappropriately.

In these circumstances, the family leaders would get together, and decide that it is necessary to murder the offending person(s) in order to restore the honor of the family. A family member is usually appointed to commit the murder. This is sometimes a young person, who would be subject to lesser punishment than an adult.

There have been many headline cases in recent times. For example, in 2014, Farzana Parveen, who was three months pregnant, was stoned to death in the front of the courthouse of Lahore (Pakistan’s most cultured city) by family members angry that she had married without their permission.

Honor killing is against the law in most countries. But all too often, the police turn a blind eye, considering this to be a matter for the family. Punishment can be lightened or waived, if the victim’s family forgives the murderer.

In the year 2000, the United Nations estimated that there were about 5000 honor killings in the world annually, with 1000 taking place in each of Pakistan and India. The real figure for world honor killings may be closer to 20,000, according to Amy Logan, President of the US National Committee for UN Women. Large numbers go unreported, or are falsely reported as suicides.

And there is every reason to expect that these figure are growing. As economic development and urbanisation proceed, young women are better educated and have aspirations for a more independent and freer life. In countries like Bangladesh, where clothing and textile manufacture is a growth industry, many women are the principal breadwinner, something which can be a big "ego-shock" in male-dominated societies.

Overall, there is a growing gap between the traditional attitudes of parents, and those of younger women, in South Asia and the Middle East.

The numbers of deaths from honor killings may seem small for populous countries like Pakistan and India. And indeed they are when compared with the numbers of people who die in these countries from car accidents or from air or water pollution.

But the other side of the tragedy is that of the millions of women who live their life in fear, who forego marrying the person they love, who accept forced arranged marriages, or who are subject to other abominable acts like acid-throwing attacks.

Aspiring economic powerhouses like India and Pakistan will never succeed or achieve their potential, whilst ever archaic medieval practices like honor killings remain part of the social landscape.

The film we mentioned above, "A Girl in the River: The Price of Forgiveness", directed by Pakistani woman film maker Sharmeen Obaid-Chinoy, won the 2016 Oscar for the best documentary short subject. It really is a must-see.

The girl in the river, Saba, was shot in the face and thrown into a river by her father and uncle, after she married for love and not through an arranged marriage. Miraculously, Saba survived.

Saba was then pressured to forgive her father and uncle to restore peace to her village. Saba’s father remains unrepentant.

“Everyone says I am more respected. They say I am an honorable man. They say what I did was right,” he said. “I have other daughters. Since this incident, each daughter has received proposals because I am called an honorable man.”

After he saw the film, Pakistan Prime Minister Nawaz Sharif, announced that his government was “in the process of legislating to stop such brutal and inhumane acts in the name of honor”.

But can we really expect this film to push Pakistan to seriously tackle this heinous crime against women?

It will be difficult. Some Pakistani politicians and religious leaders have criticized Obaid-Chinoy for bringing dishonor on Pakistan through her film!

As in the film, survivors of attempted honor killings are forced to forgive their aggressors. And murder is condoned in Pakistani society.

More generally, Pakistani women have a massively uphill battle in their quest for a decent life. Pakistan is an extremely backward country in many respects. It is ranked the second worst country in the world in the World Economic Forum’s Global Gender Gap Report, which assesses how well countries are leveraging their female talent pool, based on economic, educational, health-based and political indicators. Pakistan ranks just ahead of the unsavory case of Yemen, and just behind Syria.

In sum, Pakistan, which is in many ways the descendant of the great Mughal civilization, is today one of the least civilized countries on the planet!