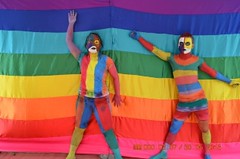 Indonesia is in the midst of a wave of homophobia which is undermining its economic and social progress argues John West.
Persecution, discrimination and prejudice in most countries prevent some groups of citizens from participating fully in society and contributing fully to the economy. In this regard, while Asia’s economies may have made great progress these past few decades, social inclusion remains a distant ideal, as the experiences of ethnic and religious minorities, lower castes, immigrants, women and youth testify.

Perhaps the most egregious case is that of Asia’s LGBT (lesbian, gay, bisexual, and transgender) communities. According to a 2013 Gallup poll, most Asian countries are not LGBT-friendly, and things may have since gotten worse.

The best performing Asian countries are the Philippines and Taiwan, where 58% and 39% of respondents respectively consider their home city or area to be LGBT-friendly. Scores were less than 30% for Japan, India, Myanmar, Thailand and Vietnam, below 20% for Bangladesh, Korea and China, and 10% or below for Malaysia, Mongolia, Sri Lanka, Indonesia and Pakistan.

Indonesia is an interesting case. Unlike its neighbors Malaysia and Singapore, it does not have national laws that punish homosexuality, although there has reportedly been a proliferation of homophobic bylaws at the local/provincial level. Nor does it have laws that protect the LGBT community from discrimination and harassment.

Traditionally, Indonesia’s LGBT community has lived in relative peace, in large part by keeping a low profile. They need to do so. A 2013 report by the Pew Research Center showed that over 93% of Indonesians believe that homosexuality should be rejected. And according to a report by a local NGO, “Arus Pelangi” (Indonesian for Rainbow Currents), over 89% of LGBT people have been victims of “psychological, physical, sexual, economic and cultural abuses”.

Against this background, a wave of homophobia has recently been sweeping through Indonesia, and threatens to undermine its economic and social progress. A trigger for the outpouring of homophobic sentiments occurred in January 2016 when Higher Education Minister Muhammad Nasir heard that some LGBT support groups were offering counselling services at a leading university. He declared that they were corrupting the country’s youth and said that LGBT people should be barred from university campuses. Many political and religious figures then jumped on the bandwagon to make their own criticisms.

Vice-President Jusuf Kalla called on the United Nations to shut down its “Being LGBT in Asia Initiative”, and to cut funding to LGBT-rights education groups in Indonesia. Hardline Defence Minister Ryamizard Ryacudu said that the gay community was “a threat” and fighting it was “a kind of modern warfare”. Former communications minister Tifatul Sembiring called for the public to kill any gay people they find. The mayor of Tangerang, Arief Wismansyah, claimed that instant noodles and baby formula are “making babies gay”.

Indonesia’s top Islamic clerical body has revived a push for gay sex to be criminalized. Parliamentarians are reportedly considering drafting an anti-homosexuality bill. The Indonesian Psychiatric Association has classified LGBTs as people with psychiatric problems. And the government is now cracking down on LGBT content on the Internet on television.

What is behind Indonesia’s wave of homophobia?

One factor may be international developments from which Indonesia cannot isolate itself. It seems that Indonesia’s conservative religious and political leaders may feel threatened by the revolution in LGBT rights that is sweeping through the Western world. In the same 2014 Gallup poll, some 69% or more of respondents from 14 Western countries indicated that their city or area is a good place to live for gay or lesbian people.

And LGBT rights are increasingly accepted as fundamental human rights, and promoted as such by the United Nations, the US foreign aid agency (USAID), and NGOs like Human Rights Watch -- all of which are active in Indonesia.

"I'm proud to be gay, and I consider being gay among the greatest gifts that God has given me", said Cook, in an essay published by Bloomberg Businessweek. (It is ironical that on the very same day that Cook’s essay was published, Singapore's Court of Appeal upheld the country's ban on gaysex.)

As Tim Cook said, "Part of social progress is understanding that a person is not defined only by one's sexuality, race, or gender". "The company that I am so fortunate to lead has long advocated for human rights and equality for all".

But in addition to being fundamental human rights, LGBT rights also make good economic sense. As Cook said, Apple is a "company that loves creativity and innovation and knows it can only flourish when you embrace people's differences. Not everyone is so lucky." It is not surprising that Apple should be the world's most valuable and perhaps the most innovative company.

Indonesia, Singapore, China, and other Asian countries dream of having homegrown companies like Apple. But until they embrace diversity, and fight against persecution, discrimination and prejudice of LGBT and other social groups, the dream of building successful innovative companies will remain a pious hope.

Most regrettably, at a time when great leadership is necessary, President Joko Widodo has remained too silent on the issue. When asked if he is concerned about rising discrimination against homosexuals, Mr Widodo’s perfunctory response was that “we respect human rights but Indonesia is the world’s largest Muslim country”.