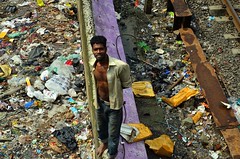 Asia has many large slums, but India's Dharavi may be the most famous, thanks in part to the film it inspired, "Slumdog Millionaire", writes John West.
Asia has many slums like Manila's Tondo, Jakarta's Kelurahan Penjaringan, Dhaka's Korail, Karachi's Orangi Town, Baotou's Beiliang in China, Osaka’s Kamagasaki, Seoul's Guryong Village, and Hong Kong's rooftop slums.

But India has the world's biggest slum population. And according to one estimate, over 60% of the population of Mumbai lives in slums. Some even refer to Mumbai as the global slum capital. India's financial, business and cinema capital, is the world’s fifth biggest urban agglomeration, with a population of 21 million.

Dharavi is no longer Mumbai's biggest slum. But it is certainly the most well-known, thanks to the film, Slumdog Millionaire, which it inspired and which was partly shot there.

Slums, like all human settlements, are a world of the own, and a world to discover for the curious at heart.

Obviously, there is the squalor. And there is no shortage of that at Dharavi. Although there are no hard data, most of Dharavi's slum-dwellers reportedly survive on a $1-2 a day. There are about 1 million people living within 1 square mile (three square kilometres), making it perhaps the most densely populated area on planet earth.

The entire residential area lacks any sort of infrastructure such as roads, public conveniences and toilets. With an average of 1 toilet per 500, most residents use alleys or the local river as a toilet, even though the river is also a source of Dharavi's fresh water. Children play in open sewers, while dead rats line the alleyways, and live ones run up and down.

The slum has severe public health problems, with a long history of epidemics and other disasters. While India’s life expectancy is 67 years, the average life span in Dharavi is less than 60. Virtually all housing has been constructed illegally, and is extremely crowded and small. Up to 5 people sleep in each tiny bedroom.

But Dharavi is not only squalor. There are also important businesses there with leather, textiles, pottery, jewelry, and steel being the most important industries, along with a large recycling business. There are reportedly some 300 bakeries. And with “slum tourism” a growing trend, Dharavi is now receiving a rising number of visitors. According to one estimate, Dharavi would have a billion-dollar economy, with over 15000 factories, which export products all over the world.

Dharavi’s business is illegal, untaxed and unregulated. Needless to say, the work environment is extremely hazardous and unsafe, resulting in fatalities and disease. Toxic sludge flows down alleyways. And child labor is widespread -- many of Dharavi’s kids start school, but few of them finish.

Dharavi is also a hub of creativity, which was highlighted in recent mobile museum, the “Design Museum Dharavi”, conceived by two Amsterdam-based artists. In addition there is the Dharavi Biennale, “Alley Galli Biennale”, which showcases installation and performance art. And Dharavimarket.com has been established as an ecommerce market place for leather product manufacturers, potters, shoe makers, jewelers and various accessory makers who want to sell their wares on domestic and international markets.

And Dharavi has a vibrant society. Since all activities involve sharing cramped spaces, life is a continuous social affair. As many urban planners say, Dharavi has a very strong sense of community, its residents seem happy, and the crime rate is very low -- although one should not romanticize too much about life in Dharavi.

There with four main communities -- Hindu (60%), Muslim (33%), and Christian (6%) -- each living in its own district, with temples, mosques and churches. Badi Masjid, a mosque, is the slum’s oldest religious structure. Dharavi residents come all parts of India, not only the local Maharashtra state.

Dharavi has a long history. The area was a mangrove swamp inhabited by Koli fishermen. Then the slum was established in 1882 during the British colonial era, and grew due to the expulsion by the colonial government of factories and residents in downtown Mumbai. Some 60% of Dharavi’s families have lived in the slum for more than 60 years.

There have long been plans to redevelop Dharavi. It is located on prime building land, and would be worth millions to developers. But resistance is great from its inhabitants and activists. Offers of compensation for the locals have been inadequate. And many residents like Dharavi’s very cheap and affordable housing, with rents as low as $3 a month. Mumbai is one of the world’s most expensive cities. The slum is also conviently located smack in the middle between Mumbai’s two main suburban rail lines, the Western and Central Railways.

It is tempting for city governments to succumb to the temptation of such development projects. But history shows that they are invariably a heartless failure. Former slum residents usually get packed up into characterless apartment blocks. All sense of community is lost. And industries like pottery and recycling disappear.

It would be much more human to provide slum residents with adequate infrastructure, including titles to the property they occupy, and help them clean up the slum. De-slumification might then occur naturally in tandem with economic development, and obviate the need for simply demolishing whole communities.