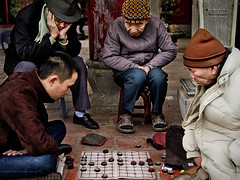 And only back in 1990, some two-thirds of Asians lived in rural communities, where extended families typically supported their elders. Today, only one-half of Asians live in rural areas, and this figure is rapidly declining as people move to cities in search of more opportunities.

As urbanization proceeds, traditional families and communities are breaking down, and being replaced by the nuclear family. While urban migrants send financial remittances to their families in rural areas, over time the Confucian sense of family responsibility is fading, as lifestyles become more individualistic and westernized. And as fertility rates decline, and family sizes become smaller, supporting one's family can be an enormous burden, especially if you come from a one-child family. The Chinese government has responded with a law which requires adult children to visit and care for their aging parents.

All Asian governments are now faced with the responsibility of providing at least some social security, in the form of pensions and health care, to their senior citizens. As poverty declines and prosperity grows, senior citizens have growing expectations. As education and access to information improves, governments must also take into account public opinion, and govern on the basis of a social contract, even in the case of authoritarian regimes which are scared of social instability. All this means responding to the expectations of senior citizens for a better slice of the rapidly growing economic pie.

So all Asian countries are in the midst of establishing systems of social security which can provide government-financed pensions and health care. This is a challenging enterprise, as it involves a much greater role of the state than in the past. Revenues must be raised to finance such social security. Systems must be designed which are fiscally sustainable, and which are fair and equitable.

Despite the very rapid progress made, social security systems are still very underdeveloped in Asia, and play a much a smaller role than in advanced Western countries. For example, China has been quick to develop public pension systems, but these mainly apply to urban rather than rural residents. And in the hyper-wealthy Hong Kong and Singapore, public pensions are virtually non-existent.

Asian countries have many lessons to draw on from the experience of other countries, especially in Europe and the US. But closer to home the examples of Korea and Japan, two of Asia's most advanced countries, highlight some of the potential pitfalls.

Despite its very rapid economic development, Korea has been very slow to develop adequate social security systems for its senior citizens, with the result that one-half of Korea's senior citizens now live in poverty, and most tragically, suicide is on the rise for this cohort who played a key role in the construction of the Korean economic miracle.

And while the benefits offered by Japan's social security system are not particularly generous, their very strong growth, together with stagnant public revenue growth, has driven Japan's national government debt to world record levels. But the political power of Japan's senior citizens make reform very difficult to achieve.

Each Asian country will need to develop their own social security systems for their senior citizens in their own historical, political and social contexts. But it will be critical for all to develop systems that are fiscally sustainable, well-targeted, and fair and equitable. The experience of Europe, the US, and the Asian cases of Korea and Japan show that this is a very great challenge indeed.
Tags: asia, aging population, asian pensions