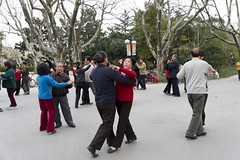 Population aging has been imposing great costs on Japan's economy for two decades. This adverse dynamic has already begun hitting China, and will soon be hitting Korea, Thailand writes John West.
Population aging started to bite hard on the Japanese economy from 1995, when its working age population (15-64) began falling, which has continued to do so ever since (its total population only began its decline in 2008). With less and less available workers, labor flipped being a positive to a negative force for the economy. Less workers also means lower national saving rates.

So Japan's annual "potential" economic growth rate fell sharply from over 3% in the early 1990s, and has been hovering in the 0%-1% range over the past 15 years. The Bank of Japan currently estimates Japan's potential economic growth rate at less than ½ per cent. And with Japan's labor productivity seemingly stuck at around a quarter below the top half of OECD countries during the past 25 years, there has been no productivity improvement to offset the effect of falling labor supplies. Indeed, population aging would have exacerbated Japan’s productivity weakness, as history shows that much innovation emanates from younger workers.

In other words, Japan's population aging, and above all the country’s failure to respond effectively to the challenge, is making the country relatively poorer. Looking ahead, Japan’s growth potential faces downward pressure from population aging. The working-age population is already falling by more than one million per year and could decline by nearly 40% by 2050.

For its part, Korea will be hit by a declining working age population at an earlier stage than Japan. Today, its GDP per capita is only about half that of the US, and it declining workforce could see it fall slowly further and further behind the US.

But the impact of China's population on the economy is likely to be very much more dramatic. Already in the year 2012, China's working age population began its inexorable decline, with a combined decline of 10 million over the 2012-2014 period. Some estimate that China’s working age population could decline by 1 1/2 % a year over the coming decades, representing big cumulative whack. But China is being hit by its demographic drama at a much earlier point in its economic catchup, when its GDP per capita of $6,800 is only about 13% of that of the US.

Thailand is a curious case where the working age population is also expected to start falling after 2017. The country is set to become the “old man” of East Asia, with its senior population (aged 65 and over) projected to increase from 8.9% in 2010 to 19.5% in 2030. Thailand is being hit by an aging population at an even earlier stage in its development than China, since its GDP per capita is only $5,800.

In other words, in contrast to the cases of Japan and Korea, China and Thailand are becoming old before they become rich. What to do?

There is much that can be done to offset the economic impacts of population aging. But the Japanese government has accepted very little international advice from organizations like the OECD and the IMF, or even from Japan's own distinguished like Masahiro Kawai or Naohiro Yashiro. And at this stage, Korea, China and Thailand seem to following Japan's path of inaction.

Offering greater economic opportunity to women in all our countries would be a positive move. And it is especially so in aging societies with vanishing workforces. But Japan and Korea are among the world's worst cases in terms of offering opportunity to women to participate in economic and political life. In the World Economic Forum's "Global Gender Gap Index", which is predictably topped by Scandinavian countries, Japan ranks 104th of the 142 countries surveyed. Korea is even worse at 117th, while Thailand and China do a bit better at 61st and 87th respectively.

Japanese Prime Minister Shinzo Abe has been doing lots of huffing and puffing about "womenomics" under the banner of his "Abenomics hype". But sadly, there has been too little action. This is a great tragedy for Japan. Its women are on average better educated than its men, and are arguably the best educated group among the advanced OECD countries. In 2011, some 63% of Japan's young women had a university degree compared with 55% of young men. And the OECD has estimated that if female labor participation rates could only converge to that of men by the year 2030, the labor supply would decline by only 5%, increasing GDP by almost 20%. The OECD has also made similar estimates for Korea, according to which if female labor participation rates for women were to converge to those of men by the year 2050, this would substantially offset the effect of aging population.

There is also much that could be done to offer great work opportunities to Japan's seniors, who have the world's highest life expectancy. After all, much of the challenge of aging comes from failure of things like retirement ages to keep pace with rising life expectancy.

But in the context of Japan's rigid seniority-based wage system, Japanese companies have a retirement age of 60. True many workers are then rehired on irregular contracts at a much lower salary. But a much more flexible labor market would allow seniors to continue their career much later, making important contributions to the economy and society. Korean companies also have a rigid labor market with seniority-based pay, which means that seniors are pushed to retire at a low age. And similarly in China, the retirement age for me is 60, while that of women is only 50. Plans are reportedly afoot to gradually lift China’s retirement age in the coming years. And none too soon!

Fast-aging Asian countries also need migrants. And it is true, that both Japan and Korea have admitted more migrants over the past decades, but the numbers of still trivial. Japan’s foreign-born population has increased from 0.9% in 1990 to 1.9% in 2013, while Korea has done a little better with an increase from 0.1% to 2.5%. China’s foreign-born population is infinitesimal at 0.1% of total. It is a great pity that these countries are not more open to international migration. They have nearby neighbors like Bangladesh, India, Indonesia and the Philippines, which have “surplus” populations who are seeking migration opportunities. And with refugee crises in the Middle East and also South East Asia, there is also a moral and humanitarian case for accepting these migrants.

It should not be surprising that Asia’s most prosperous economies of Singapore and Hong Kong, which have equally dramatic demographic situations, also have very large migrant populations. The foreign-born population of Singapore now accounts for 43% of total, up from 24% in 1990, while Hong Kong’s has been a steady 38-39% over the whole period. Both economies have two-track migration policies, attracting both high-skilled and lower-skilled workers. For its part, Thailand has also attracted growing numbers of migrants, with the foreign born population rising from 0.9% of total in 1990 to 5.6% in 2013.

Another strategy for coping with aging populations is implementing deep structural reforms to improve productivity. Japan has talked of structural reform for years, the latest incarnation being “Abenomics”, but it has always been short on action. Both Japan and Korea became manufacturing giants through their export-led strategies. But both also have incredibly inefficient service and agricultural sectors because of great trade protectionism, regulation and poor corporate governance. Thailand has a long, long way to go before creating a prosperous society. It requires above massive improvements to its education sector, and opening its economy to much greater domestic and international competition.

For its part, China is still less than midway in a transition from centrally-planned to a full-fledged market economy. China has great potential to improve its productivity. Deep reforms have been promised that would give market forces a “decisive role” in the economy. But if anything, the heavy hand of state control has been stronger, with insufficient sign of productivity and innovation becoming new drivers of the economy.

Again, Singapore and Hong Kong stand out for their open-market economies, which enable them to generate greater prosperity than these other aging economies. Regrettably though, these rich economies are also stingy, with the result that too many of their senior citizens are living in poverty.

The experience of Japan, with over two decades of stagnation under its belt, should be salutary to not only China, Korea and Thailand, but also to Japan itself. Postponing bitter medicine seems easy in the short term. Vested interests supporting the status quo are always difficult to tackle, be they in a democracy or authoritarian regime. But unless the Japanese, Korean, Chinese and Thai governments seriously tackle the challenge of aging populations, their countries will likely wither away.

In the next article, we will examine some of the social policy implications of Asia’s aging populations, notably retirement incomes and health expenses.

- Asia in the ageing century: