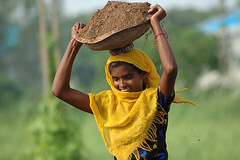 The biggest contribution to the global labor force in the next few decades will come from India. But will India be able to convert its youth bulge into a demographic dividend asks John West?
India, along with countries like Bangladesh, Indonesia and the Philippines, is in the midst of a major "demographic transition". Life expectancy has leapt from just 41 years in 1960 to 66 in 2012 thanks notably to improvements in infant mortality. And while its fertility has fallen dramatically from almost 6 children per woman in 1960 to 2.5 in 2012, it still remains well above the "replacement rate" of 2.1.

If population is power, then we should be looking more at India rather than China.

The stark contrast between the demographic destinies of China and India is very much with us today. China's work force started declining in 2012, while India's is in the midst of a dramatic expansion. India will see an expansion in its working age population of 300 million between 2010 and 2040, representing one-quarter of the world population increase for this age group.

There are grounds for optimism, based on India's experience over the past few decades. India's youthful demography would have contributed a substantial fraction to India’s growth acceleration since the 1980s according to the IMF. And a demographic dividend could add 2 percentage points to India’s annual economic growth rates over the coming three decades.

But the prospects for achieving this seem daunting. Demography is not just a question of quantity. It is also a question of quality. And the quality of India's human capital is one of the poorest in Asia, despite the brilliance of the country's elite.

Only three-quarters of the population are literate according to official statistics. And according to deeper analysis by Indian economist Santosh Mehrotra, only half the nation's population would be "functionally literate". Such an estimate is hardly surprising in light of India’s deep poverty, malnutrition and poor health conditions.

For those 300 million additions to the Indian jobs market to find work, they will also need practical skills. But India has one of the lowest proportions of trained youth in the world.

India needs to improve its education system at every level. What is critical is to create an effective Vocational Education Training (VET) system which would cater to the vast majority of India's young population. But VET has received very limited funding, is of poor quality, and involves little industry collaboration. The result is that just 2 per cent of the Indian workforce has skills training in formal vocational education. And only another 2 1/2 per cent have received any informal vocational training at all.

The need for VET is perhaps the greatest for rural workers who are flowing into cities in search of opportunity in the construction, manufacturing and service sectors. Without any vocational training, these workers end up in the informal sector, working in low-paid jobs, and joining the ranks of urban poverty.

Even today, India's economy is being held back by a large skills deficit. Its jobs market suffers from shortages of skilled labor, while unemployment and underemployment are also widespread.

Training is only one side of the jobs equation. India also needs business investment to drive industrialization. As dazzling as India's IT and business process outsourcing might be, the sector only employs 3 million people. Realistically most Indians could not find a place in this sector.

Only more serious industrialization can provide sufficient jobs for its growing workforce. With China now suffering from rising wage costs and a weak demography, India has a window of opportunity to become a manufacturing powerhouse -- all the more so given that investors like Japan are looking for new low-cost locations.

But countries like Vietnam, Cambodia and the Philippines are having more success in attracting industry. Notwithstanding the promise of Prime Minister Narendra Modi's election in early 2014, there has been very little progress in tackling India's chronic problems of poor infrastructure, endemic corruption, and appalling bureaucracy.

If India's leaders are unable to tackle the country's chronic problems, the country will not only miss out on a big opportunity. Its demographic opportunity could turn into a demographic time bomb. Social unrest in Arab countries and elsewhere shows the social and political risks of large populations of unemployed and frustrated youth.