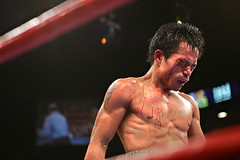 The meaning of Manny Pacquiao

When Filipino boxer Manny Pacquiao stepped into the ring with Floyd Mayweather in May 2015, the whole Philippine nation was united as one, as it always is when Pacquiao fights. This nation of dire poverty and immense riches, street children and landed elites, Muslims and Christians, 7107 islands and 8 major dialects was seemingly held together by its unrivaled national hero.

Thanks to Pacquiao-inspired bouts of social cohesion, local militias and terrorist groups put down their arms and watch the pugilist's fights on global television networks. Pacquiao's fights also see a big drop in crime, as even criminals partake in the joy of watching their beloved 'Pac-Man' in action.

That Pacquiao comes from a childhood of poverty and a broken family in the depths of the Philippines' southern island of Mindanao only adds to his mythical image. He thus inspires the large number of migrants leaving this country to believe that, one day, they might just be able to make it too.

The popularity of Manny Pacquiao extends way beyond the Philippines to the US and other countries. As the mainly American crowd booed Mayweather on the occasion of his victory, it was clear that Pacquiao was very much the "people's champion".

Pacquiao's loss to Mayweather only hardened the resolve of this country of underdogs. They are convinced that Manny was cheated, that his efforts deserved victory, as the fighter does himself. They see Mayweather as a dancer, not a fighter. A wimp who rang away from their national hero, and was not prepared to slug it out like a real man. Curiously, the Philippines' sweet, but strong, women pass a harsher judgment of Mayweather than do the men.

But as with previous bouts, Pacquiao's contribution to the social cohesion of the Philippines seems to have been only a passing episode. The country's moment in the global limelight faded as quickly as it came. International commentators agree that Mayweather was simply a class above the man who was once designated Fighter of the Decade by the Boxing Writers Association of America. And the chronic divides of this enchanting nation have come back to the surface.

So what is the meaning of Manny Pacquiao?

Perhaps the great lesson of Manny Pacquiao's influence is that this mosaic nation of the Philippines is very much capable of coming together around a source of inspiration or national pride or even a common project. Diversity and harmony can coexist. But as the examples of East Asia's success stories show, strong inclusive political leadership, not individual heroics, is necessary to foster sustainable social cohesion over the longer term.

The miracle economic and social development of many other East Asian countries was driven by "determined, devoted, and inventive leaders, in both business and government", as Michael Schuman recounts in his excellent book "The Miracle: the epic story of Asia's quest for wealth".

In recent years, the strong and inspired leadership of Benigno Aquino has done much to foster a cohesive and inclusive society. The Philippines has become Asia's new tiger economy. But as Asia's success stories highlight, successful economic and social development requires decades, not years. Much will therefore hang on the efforts of Aquino's successors.

Perhaps one of the greatest risks facing the Philippines is that Manny Pacquiao could run for President when he retires from the ring. He would surely be elected by the population which is so enamored with celebrity politics. But the evidence from his patchy political career (he is an elected member of Congress) does not bode well for a successful presidency, despite generous contributions for social projects and natural disasters.

- The Miracle: The Epic Story of Asia's Quest for Wealth by Michael Schuman