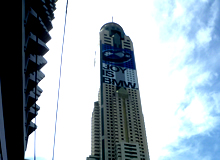 When it comes to developing economies, the role of government should be adapted according to a country's stage of development.

For low income countries (like Bangladesh or Cambodia), government should concentrate on the basic requirements of a market economy -- law and order, clean water, adequate sanitation, roads, education and health. While this is the most basic requirement for development, many countries are way behind in the provision of infrastructure.

For example, promising growth dynamics in the Philippines and Indonesia are currently being held back by those countries' appalling state of infrastructure. Even at this early stage of development, government should also protect the environment from things like air and water pollution, which can have a terrible impact on human health.

In middle income countries (like Indonesia or Thailand), government should undertake a more sophisticated range of functions. It is necessary to provide higher education and training, develop the institutional framework for a dynamic private sector, open markets to international trade and investment, build the infrastructure for information technology. While middle income countries may become innovative (such as through "frugal innovation"), their primary focus should be absorbing and attracting knowledge and technology from the rest of the world.

High income countries like Japan, Singapore and Korea should focus on promoting innovation-driven development. This means protection of intellectual property, tax and other policies to promote private sector research and development, investments in basic science and other research, higher education policies that foster innovation, financial markets that offer capital to innovators, and enterprise policies that facilitate the creative destruction that is part and parcel of a dynamic market economy.

Thus government and business worked hand-in-hand in a partnership referred to as the "development state". Local enterprises were protected against imports and foreign investment since such competition might threaten them. Selected enterprises were given preferential access to low-cost finance. And government also helped in the acquisition of technology.

But this was not a free ride. Enterprises had to prove their worth by succeeding through exports on international markets. They were thus market-tested! Thus, Japan and Korea saw the rise of very successful enterprises like Toyota and Sony, and Samsung and Hyundai.

As all children should be set free and become self reliant, Japanese and Korean governments should have stepped back and forced these companies to operate on a level playing field. This is necessary for succeeding innovation-driven development.

But the Japanese and Korean governments have not done this. Enormous restrictions still apply to foreign investment and imports into Japan and to a lesser extent Korea. Cosy relationships between big business and government favour existing companies, including for privileged access to finance, and make it difficult for dynamic and innovative new companies to penetrate markets. This is a form of "crony capitalism", where success in business depends on close relationships between business people and government officials, as much as it does on business efficiency. And high level corruption is rife in both countries, even if street corruption is basically absent.

At the heart of dynamic and innovative capitalism is the process of creative destruction. If old companies become unprofitable, they should be left to fail, leaving room in the market place for dynamic new players. But in Japan and Korea, the cosseted system protects companies from creative destruction. This is one reason why their productivity and GDP per capita is still lagging behind the US and Germany.

Both Japan and Korea have deep bureaucratic cultures. Both countries may rate well in the World Bank's ease of doing exercise -- 7th in the world for Korea and 27th for Japan out of 189 countries. But on some indicators, they score very poorly. Korea ranks 75th for registering property, 52nd for protecting investors, and 34th for starting a business. Japan ranks 120th for starting a business, 91st for dealing with construction permits, and 66th for registering property.

There are some similarities between the case of China, and Japan and Korea.

Until 1978, China practised central planning, with most business being owned by the state. And China had poor infrastructure and public services.

Since that time China has made impressive investments in physical infrastructure like roads, railways, airports, ports, etc. Its infrastructure development has been much more successful than democracies like India and the Philippines, leading some observers to believe that communist policymaking is much more efficient than democratic governance.

When Deng Xiaoping launched the reform period in 1978, he allowed the domestic private sector to blossom progressively. He also opened China to foreign investment, though in a selective way and in deliberately chosen sectors. Foreign companies were often forced into joint ventures, with the objective of transferring technology and knowledge to local partners.

Further, China privatized many state owned enterprises (SOEs), especially smaller ones. But the government also retained ownership of other SOEs in many "strategic" sectors, and then fostered their development. These SOEs have often benefited from monopoly positions in the local Chinese market, restrictions on foreign investment and imports, access to cheap finance, and low tax and dividend requirements.

Many of these SOEs have become major players in the global economy, especially in the areas of energy, telecommunications and banking. They are absorbing foreign technology and climbing the development ladder. Overall, however, these SOEs have low productivity, are not very innovative, and have become vehicles for corruption by senior managers.

If China wants to continue climbing the development ladder to high income status, it will also need to expose its SOEs to the winds of competition and creative destruction. But there is much resistance to that by the managers of these companies, who usually have close connections to the Chinese Communist Party, and who in some cases exploit opportunities for corruption.

Almost a year ago, the Chinese government announced new reform plans, including that in the future, the market will play a decisive role in resource allocation. Despite these nice words, there is no sign yet of any progress on this front. The government has been harassing foreign companies on anti-trust and other grounds in ways that benefit SOEs.

Some argue that China's SOEs are part of a system of state capitalism, which serves to make the state strong, rather than serving the economy and citizens.

The economies of South East Asia, like Thailand, Malaysia and Indonesia, have benefited greatly from foreign investment, in contrast to Japan and Korea. They also have large companies with close links to government. But these companies have not been disciplined to succeed, as in Japan and Korea.

In conclusion, while developmental state policies may be effective in helping infant industries climb the development ladder, an innovation- driven economy requires full exposure to the forces of domestic and international competition, and a dynamic process of creative destruction. It also requires a policy framework that fosters innovation, and all bureaucratic barriers to entrepreneurship.

Asia's leading governments are still a long way from a system of governance that fosters innovation-driven development.

- A handicap that inhibits growth in the Philippines ; Crumbling infrastructure could keep fast-growing economy from next level. International Herald Tribune. August 4, 2014.