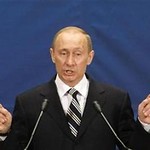 The Age of the Strongman: How the Cult of the Leader Threatens Democracy Around the World

We are currently living in a new era, that of the strongman, according to Gideon Rachman. And this era arguably began with Vladimir Putin.
Looking back, it was the arrival of Vladimir Putin to the leadership of Russia at the beginning of the new millennium that heralded the era of the strongman leaders, according to Gideon Rachman in his book The Age of the Strongman: How the Cult of the Leader Threatens Democracy Around the World. Rachman, the chief foreign affairs columnist for the Financial Times, regards Putin as “the archetype and model for the current generation of strongman leaders.” The strongman phenomenon gradually gathered momentum, he writes, as Putin was followed by Turkey’s Recep Erdoğan in 2003, China’s Xi Jinping in 2012, and India’s Narendra Modi in 2014.

Many thought that strongmen were alien to the West. But then there was Boris Johnson’s championing of Brexit, and Donald Trump’s victory in the US presidential election in 2016. This was followed by the Philippines’ Rodrigo Duterte in 2016, Saudi Arabia’s Mohammed bin Salman Al Saud in 2017, Brazil’s Jair Bolsonaro in 2018, and others.

But what is curious about the rise of these strongmen, according to Rachman, is that many appeared to be liberal democratic reformers when they took power. They played along, preaching the benefits of globalisation. Many Western observers, including Rachman himself, misread the early signs of strongman political reality. And the longer they stayed in power, the more they tightened the screws.

Rachman does not develop a general theory of the strongman. As a journalist he has assembled a wealth of information, mainly based on interviews, from which he infers impressionist conclusions rather than undertaking deep analysis. Rachman’s list of strongmen come from a variety of political systems, and yet he argues that there are common elements.

First, the strongman era is based on personality-driven politics. The country is perceived to be facing a catastrophe, and it needs a strongman to make the big decisions. “I alone can do it,” Donald Trump told the Republican National Convention. Strong men have been uniquely men, although France’s far right leader Marine Le Pen threatens to one day become the world’s first female strong man!

Strongmen believe that you need to break the rules to get things done, especially since the system is perceived to be rigged by the globalist elite. For the strongman, the world is not complex. Rather, he suffers from simplism – like “get Brexit done.” Strongman leaders can also be conspiracy theorists, with George Soros often identified as a common enemy. Strongman politics is often associated with “nostalgic nationalism,” the concept of the good old days – make America great again; the great rejuvenation of the Chinese people; Russia trying to cling to its great power status; Modi recalls an earlier period of Hindu greatness; and Boris Johnson promotes “Global Britain” reviving notions of Empire. Another trait is deep social conservatism in the face of the perception that globalist elites are imposing alien values like women’s and LGBTQIA rights.

Support for strongman leaders comes from a variety of sources, depending on the country. But political grievances are at the heart of their support, from people in Western countries who have been left behind by globalisation to countries like China and Russia, which harbour historical grudges against the West and its domination of the world order. There is unfortunately insufficient mention of how Western financial centres have collaborated with strongmen and their cronies to facilitate their survival by helping launder ill-gotten gains. This issue has been tackled in depth by Oliver Bullough in his book Butler to the World.

Rachman concludes that the strongman is a flawed model because of the over concentration of power and the difficulty of changing leaders in non-democratic systems – and sometimes even in democratic countries – if something goes wrong. Indeed, the longer strongmen stay in power, the more likely they are to become a megalomaniac or to make some terrible error. We can see this now in Ukraine and in China’s drastic lockdowns in Shanghai, as it stubbornly clings to Xi’s zero-COVID-19 strategy. Although Rachman’s book was finalised before these events, he has offered such comments in various webinars.

Many strongmen stay in power through long periods of poor governance, even when coming into power via open elections, as in the cases of Putin, Erdogan and Modi. They can thus do much damage to democratic institutions, such as through electoral interference, human rights abuses, and restrictions on freedom of speech. “The last 15 years have seen the most sustained decline in political freedom around the world since the 1930s,” writes Rachman.

And when they have a firm grip on key political institutions – notably the military, the police and the judiciary – and have elites in their pocket through corrupt patronage, strongmen are very difficult to dislodge. Vladimir Putin has recently signed legislation that gives him the right to run for two more consecutive terms, meaning he could remain in power until 2036, by which time he would be 84 years old! One reason that strong men hold on desperately to power is that they fear being out of power, which can often mean either assassination or jail.

In short, strongmen are more dangerous and flawed than democracies despite their naive appeal. Singapore’s Lee Kuan Yew was a very rare bird as a successful strongman. But if the strongman is really a flawed model, Rachman does not suggest what might come next, how we might get there and how future politics could next respond to the many grievances that abound in this world. It seems that Rachman is recommending that we simply wait for the strong men to fail.

Rachman’s book is a very useful addition to a growing literature on political strongmen, though he is somewhat less analytical than books like “Weak Strongman: the Limits of Power in Putin’s Russia” by Timothy Frye. In his book, Frye argues that Putin is not all powerful. Rather, like all “personalist autocrats”, his policies must mitigate both the threat of a coup from other elites and protests from the masses, and this is a tricky balancing act.

Liberal democracy is in rather bad shape now, and is certainly a long way from the “end of history” hype of three decades ago. In this context, “The Age of the Strongman” makes an accessible and well-written contribution to our understanding of the troubling strong man phenomenon, one that could be with us for some time, especially if Donald Trump returns to the US presidency in 2025.

- John West. Book Review: The Age of the Strongman: How the Cult of the Leader Threatens Democracy Around the World, Australian Outlook

- Gideon Rachman. The Age of the Strongman