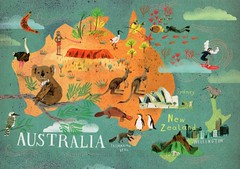 A look at Australia’s recent national election and a rundown on issues shaping the political landscape in the country.
Australia’s recent national election, which saw a victory by the centre-left Labor Party, major losses for the right-wing Liberal Party, and a challenge to these traditional parties by a “third force” of the Greens and a number of independent politicians, represents nothing less than a democratic political revolution.

At face value, Australia would seem to be an unlikely candidate for a political revolution. By virtually any measure, Australia would be considered one of the world’s most successful countries. Its GDP per capita is ranked among the world’s top 20 countries of a world with around 200 jurisdictions. It is also ranked the world’s 12th happiest country by the World Happiness Report.

Further, with 30% of its resident population being born overseas, Australia was described as the most successful multicultural society in the world by then Prime Minister Malcolm Turnbull. And in 2020 and 2021, Australia suffered only 2,226 deaths from COVID-19, while COVID deaths in the US and Europe have recently eclipsed one and two million respectively.

Yet, Australian citizens have become increasingly dissatisfied with the nation’s established political class, especially the right-wing Liberal Party and its coalition partner, the National Party. Key sources of dissatisfaction have been the Liberal/National government’s inadequate policies for climate change, integrity and corruption, and respect for women.

Since World War II, Australian politics has been dominated by the Liberal/National Party coalition and the Labor Party. True, there have been some minor political parties like the Australian Democrats, founded in 1977, and the Australian Greens in 1992, as well as some independent politicians.

But this election saw a marked rise of a third force, the Greens and independent politicians. The two traditional parties only won two-thirds of the nation’s vote – Labor 33%, and the Liberal/National coalition 35%. The Greens won 12%, and independents and others 11%, while two extreme right-wing parties (One Nation and United Australia) won a combined 9% (Australia’s complex preferential voting system enabled Labor to achieve a decisive victory).

This indicates that the traditional political parties are no longer able to command a dominant share of the nation’s votes, and a third force is also driving Australian politics. This is due to a loss of trust in the political elites and a swing to the far right by the Liberal/National coalition, as well as popular desire for politicians to represent local interests, rather than being party apparatchiks or representatives of major corporate interests.

A number of the successful independent candidates are strong, savvy and professional women who can be seen as right-wing defectors from the Liberal/National Coalition because they are frustrated by its lack of commitment to climate change, women’s rights and public integrity. These politicians are now referred to as “teals”—meaning a combination of blue (for right wing) and green (for climate action).

At the time of writing, it was unclear whether the Labor Party would win enough constituencies to govern as a majority government, or whether it would be obliged to govern as a minority government with the support of minor parties and/or independent politicians (there is no hope of the Liberal/National Party coalition forming a government). In any event, the new Labor government will no longer be able to ignore the third force in Australian politics, and the public concerns behind it.

How serious are climate, integrity and women’s issues in Australia?

On the international stage, Australia is increasingly seen as a pariah when it comes to its climate policies. For example, Australia is ranked only 59th in the Climate Change Performance Index. The country is addicted to coal. Many Australians will insist that their country contributes only 1.3% of global carbon dioxide emissions from human activity, and thus there is no need for Australia to be a climate change leader. But this blinkered approach to climate change prevents Australia from working in coalitions of countries that take climate change more seriously, and push big emitters to be more ambitious in tackling climate change. It has also poisoned relations with Australia’s Pacific Island neighbours, at a time when Australia is competing with China for their attention.

It is critical that Australia take climate change more seriously as it is increasingly a victim of its adverse effects, notably through bushfires, floods and droughts that have afflicted the country so much in recent years. One of the most shocking aspects of Australia’s climate future is that the country is fast becoming an “uninsurable nation”, according to the Climate Council. One in 25 Australian properties will be effectively uninsurable in just eight years, with figures as high as nine out of ten in the worst affected suburbs.

Australia has seen numerous cases of financial corruption, cronyism and favouritism by politicians in recent years. Public outrage reached such a point that outgoing Prime Minister Scott Morrison promised in December 2018 to establish a national integrity commission. However, he did not manage to do so because he could not come up with a proposal that would seriously tackle the problems and win legislative approval.

It should therefore not be surprising that Australia has dropped from 4th place to 18th place since 2012 in the International Corruption Perception index of the anti-corruption watchdog Transparency International. That’s an even steeper decline than the US under President Donald Trump. Once again, this is damaging to the international reputation of an Australia that preaches good, clean governance to its neighbours in the Indo-Pacific region. Public corruption has adverse effects on economic growth and trust in politicians.

Thankfully, the incoming Labor Government has committed itself to establishing a National Integrity Commission. But Australia’s corruption problems are deeper than that. As Transparency International has highlighted, there is much money laundering and corruption associated with foreign investment in Australian real estate. Further, Australia’s casino and gaming industry has been found to be riddled with financial crime. And these are just the tip of Australia’s corruption iceberg.

Accusations of rape, bullying and discrimination in Australia’s Parliament House hit the headlines over the past year, something the government has been very sluggish in addressing. But there is more to Australia’s gender problems than that. Women have been barely visible in the Liberal/National Party, which has governed for almost nine years. It is a male-dominated, macho political machine.

Australia has a chronic gender pay gap, meaning that on average women have been paid between 15% and 19% less than men for the same job for the past two decades.

The Liberal/National Party government made a half-hearted response to Sex Discrimination Commissioner Kate Jenkins’ Respect@Work report, the National Inquiry into Sexual Harassment in Australian Workplaces 2020. And family, domestic and sexual violence against women is a major issue in Australia. Therefore, it should come as no surprise that Australia is ranked a mere 50th in the World Economic Forum’s Global Gender Gap Report 2021. Australia’s ranking finds it sitting between Georgia and Suriname, and well behind Zimbabwe and Cuba, among many other countries.

COVID-19 and the Australian election

One of the most striking things about the recent election campaign was the virtual absence of discussion of COVID-19. Australia became infamous for its draconian measures to manage the pandemic in 2020 and 2021. This resulted in a very low number of COVID cases and deaths and, at the same time, very good economic performance.

Over the past six months, however, the government has pivoted to a strategy of “living with COVID” and relying on vaccination to control the disease. Such a strategy basically became unavoidable due to business pressure to stop lockdowns, and “lockdown fatigue” on the side of Australian citizens.

The outgoing government keeps chanting that Australia has an enviable record in managing COVID. The reality is more nuanced. True, death and case rates were low in the first two years of the pandemic, but Australia’s under-resourced health sector has seen doctors, nurses and support staff put under extreme pressure, and denied holidays for two years, with the result that some are now resigning to take a break. Emergency patients were frequently queueing up for hours. Moreover, much “elective surgery” was postponed, such that today thousands upon thousands of patients are waiting for their surgeries, and suffering in the meantime.

In 2022 to date, Australia has been living a very different COVID reality. Case numbers are running very high, COVID deaths continue, with three times as many people dying this year than in the previous two, and vaccination rates are not high enough. According to one report, Australia has the highest per capita COVID-19 infection rate in the world. Thus, the nation’s health system is under even more pressure than ever.

Australia seems to be moving towards a more pluralist and inclusive paradigm with the rise of independent politicians and the Greens as a third force in politics. This promises the potential for tackling the challenges discussed above in a more effective and responsive manner.

But there is always the risk that this new paradigm results in fractured and divisive politics, and little progress on these issues—as well as the many other issues facing Australia. And with Labor governing by a fine margin, the temptation for populism and permanent campaigning will always be there.

What Australia needs now is wise and strong leadership to manage the country’s heightened political complexity. At this point, it is not obvious that we have that.

This article by John West was first published by "Unravel" on 24 May 2022.