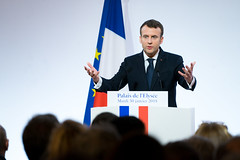 Emmanuel Macron's victory cannot mask deepening divides in French society
The French establishment heaved a deep sigh of relief on 24 April when Emmanuel Macron beat Marine Le Pen in the presidential elections. Macron, the incumbent, managed to be re-elected, something neither of his two predecessors managed to do.

Representing the centre-right wing party, “La République En Marche” (The Republic On The Move), Macron won comfortably by 58 to 42% of the votes cast, against Le Pen who heads up the far-right wing “Le Rassemblement national” (National Rally). While this victory might seem decisive, there were many jitters among the establishment in the leadup to election day. In the wake of populist upsets like Brexit and Donald Trump’s presidency, there was much less of a fear factor associated with Le Pen and a recognition that populist surprises can happen. There were also concerns that a high abstention rate among voters might play against Macron.

The margin of victory was closer than in the 2017 presidential elections, which Macron won by 66 to 34%. In 2017 there was a wave of optimism and hope that a new personality, leading a brand new political party, could revive France’s economy, unite its society, and be a face of fresh international leadership. Today, in 2022, it was a case of defending the record of a President whose achievements did not match up to his promise.

As fascinating as the second and final round of the presidential elections might be, the first round, which brought together 12 candidates, is more revealing of the state of France. Here we see a France fractured between the far-right wing – Le Pen (23% of the vote) and Éric Zemmour (7%), and the far-left wing – Jean-Luc Mélenchon (22%), with Macron being the only centrist candidate (28%).

France’s traditional right and left wing parties, the parties of Charles de Gaulle and François Mitterrand, which governed France for most of the post-war period, have been virtually decimated. Their candidates, Valérie Pécresse and Anne Hidalgo only won 5% and 2% of the vote, respectively.

While France might be the home of the Paris Agreement on climate change, Yannick Jadot of The Greens only garnered 5% of the vote. This is in sharp contrast to Germany where the Greens finished in third place in the 2021 federal election with 15% of votes, and are now members of the coalition government.

What is behind France’s fractures?

President Macron is a divisive figure. He is highly regarded for his technocratic brilliance, and courage in tackling pension, labour market and tax reforms. His government also reacted swiftly and strongly to counter the economic and social impact of COVID-19. And with the economy now recovering, unemployment in the final quarter of 2021 fell to 7.4%, the lowest in 13 years.

However, Macron has stumbled. In late 2018, there was a long bout of social unrest, the “Gilets Jaunes” (yellow vest) movement, when thousands of French people came together to protest against an increase in fuel taxes, and above all a President who they perceived as elitist and out of touch with ordinary French people and their economic and social despair.

Indeed, Macron is widely seen as a symbol of the country’s ruling technocratic and bureaucratic elite, which is the root of France’s problems, according to Brigitte Granville. What’s more, there would be a troubling degree of “hatred” toward Macron, much more so than in the case of his predecessors, according to authors Nicolas Domenach and Maurice Szafran.

Marine Le Pen is an even more divisive figure. She is widely criticised for her relations with Russian President Vladimir Putin, her disdain for the European Union and NATO, and tough anti-migration stance. Her father, Jean-Marie Le Pen, founder of her political party, once dismissed the Nazi gas chambers as a “detail” of history.

France’s fractures are born not only from its political personalities, but from issues that split the country, with immigration being the nation’s lightning rod. France was long a country that welcomed immigrants and immigrants make important contributions to the French economy and society. They can bring skills for which there may be shortages, such as in the IT and health sectors. Immigrants are often entrepreneurial. And, of course, immigrants are willing to do the “dirty, difficult and dangerous” jobs that many locals shun.

More generally, France has an ageing society, a declining working age population, and above all a reluctance to increase the retirement age. In these circumstances, immigrants can contribute to the economy. But anti-migration sentiments are palpable in France, and immigration has been a major plank of Marine Le Pen and her Rassemblement national political party. Immigration is often associated with a perceived deterioration in the local security environment, Islamic terrorism, exploitation of government welfare, and a sense that French culture and identity is being threatened.

It is true that France’s immigrant population has grown strongly over the past decade, from 8% to 14% of the total French population, and now counts close to 10 million. And in recent years Europe has experienced a wave of illegal immigration and refugees. However, immigrants in France only make up a similar share of the population to those in the Netherlands, US, UK and Spain, and only around half the share of immigrants in Australia, Switzerland and New Zealand.

Moreover, immigration in France is not dominated by North Africans, as most French imagine, with the most recent data indicating that Algeria and Morocco account for less than 20% of the immigrant population. The majority of immigrants come from other European countries, with China also now an important source of immigrants.

That said, as the OECD has argued in a recent report, socio-economic disparities and spatial segregation are stark in Paris and represent a key barrier to integration of immigrants, who suffer from above-average unemployment. The French government needs to become more effective in integrating migrants, especially refugees beginning to arrive from Ukraine.

Globalisation has also been a divisive issue in France. This is ironic because French companies are global champions in many fields: Total in the oil and gas industry; AXA, Crédit Agricole, BNP Paribas, and Société Générale in finance and banking; Peugeot and Renault in the motor industry; and Christian Dior-LVMH and L’Oréal for luxury products. Moreover, France’s urban elites and members of the bourgeoisie, typically supporters of Macron, are great beneficiaries and supporters of this globalisation.

However, like the US, UK and many other Western countries, France is becoming increasingly divided between people winning from globalisation and technological change, and those who have been sidelined, as industries have relocated to lower cost countries and jobs have been eliminated through automation and digitalisation. French geographer, Christophe Guilluy, sees the emergence of a ‘peripheral France’, beyond the big cities, which contains 60% of the national population. Peripheral France—the ‘left-behind’ regions of France—has seen a shrinking middle class, stagnant or declining incomes, economic insecurity, unemployment, eviction from their accommodation and squeezed public services. Many of these people were part of the Gilets Jaunes movement, and would have voted for Jean-Luc Mélenchon of the La France Insoumise (“France Unbowed”) political party.

Finally, another great fracture concerns Europe. Macron is a strongly committed European who believes that after hundreds of years of war, the European Union has brought peace and prosperity following the end of the Cold War. In today’s world of great power rivalry, he believes that Europe must be better integrated and transform its enormous economic weight into political power to be an effective competitor, rather than a marginal player. The war in Ukraine only confirms his view that Europe should aim for greater strategic autonomy in order to assume greater responsibility for its own defence.

But while Macron may have a greater commitment to Europe than any other European leader, Le Pen is a confirmed anti-European populist nationalist who used to push for France leaving Europe. Today, Le Pen has softened her posture on most issues, but would still like a substantial renegotiation of the terms of France’s membership of the EU. Outside the elite, many French people have a negative opinion of the EU and the euro.

President Macron may have won a decisive victory in the recent French presidential election. But he faces enormous challenges in leading a fractured France, and trying to bring the country together. If he does not succeed, it may be just a matter of time before Marine Le Pen, or someone else from Le Rassemblement national, wins the French presidency. For the moment, his La République En Marche party will likely not win a majority in the National Assembly elections in June, meaning that he could face a parliamentary coalition and Prime Minister not exactly to his liking.