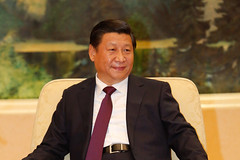 Roger Garside predicts that China’s strongman leader Xi Jinping will soon be removed from office in an internal Communist Party coup.
President Xi Jinping is China’s most powerful leader since Mao Zedong. He so dominates Chinese politics that he has been referred to as the “Chairman of everything.” And since the abolition of presidential term limits, which he engineered, he has also been called China’s “President for life.”

And yet, in his new book, Roger Garside predicts that Xi will be removed from office by an internal Communist Party coup before the next National Congress of the Chinese Communist Party (CCP), due in November 2022, at which meeting his leadership of the Party was widely expected to be extended. Unbelievable? As Garside reminds us, in January 1991, not a single expert was predicting that the Soviet Union was about to collapse nor the Communist Party of the Soviet Union might dissolve itself. But within ten months, both had happened.

Garside’s book, China Coup: The Great Leap to Freedom, is an intriguing work. Two chapters are semi-fictional, based on real people, with a fictional storyline of how the coup takes place. The remaining eight chapters, the main body of the book, offer reasons for the coup taking place, principally, growing discontent within China, and the deterioration in China’s relations with the US.

Garside, a long-time diplomat, development banker, and author, identifies a combination of factors driving his coup scenario. First, he argues that a mass of people in the CCP believe that the regime under Xi Jinping’s leadership is on a course which is disastrous for the Party, the nation, and themselves personally. The underlying reality is that China’s one-party dictatorship is in a state of irreversible political decay. The regime is fearful. It fears democracy, truth, and religion. China’s problems have arisen because economic reform has not been accompanied by political reform. Like all totalitarian regimes, it’s forced to rely on control rather than trust.

Second, Xi has put China on a collision course with the US, something which has only been exacerbated by the initial coverup of COVID-19. The US is increasingly concerned that China poses a threat to the world order established since 1945. The prospect of China becoming the biggest economy in the world under a totalitarian regime armed with advanced technologies is a nightmare that must be stopped by pushing for political change.

Through China’s high-growth years, close economic integration with the West through finance, trade, and technology has been a boon, but it also made China vulnerable to geoeconomic warfare. Nearly two hundred Chinese companies have been registered on major US stock exchanges since 1992, raising tens of billions of dollars each year. But Beijing has prevented these companies from disclosing financial information required by US law.

This provides a key trigger in Garside’s coup scenario, during which the US Securities and Exchange Commission suspends trading for five big Chinese companies that have failed to comply with financial disclosure requirements. This leads to a crash on Chinese stock markets and civil disturbances around the country. To add fuel to the fire, Garside posits that a People’s Liberation Army Navy ship rams a US Navy destroyer in the South China Sea, killing five US sailors and wounding six others.

In the background leading up to this crisis, Li Keqiang, the second-ranking member of the CCP after Xi Jinping, was assembling a group of “Friends” from the CCP leadership and military to mount the coup. And when the CPC Politburo meets in the midst of this economic and political crisis, Premier Li and his co-conspirators turn on President Xi, with the support of others present, and hold him responsible for the imbroglio in which China finds itself. They inform Xi that he has been forcibly retired. Li and the others then proceed to set in motion the process for China to become a democracy with rule of law. Garside’s book stops with the announcement of imminent changes, and leaves the reader wondering what might happen next.

Garside’s China Coup scenario, with its sudden great leap to freedom, has great naive appeal for those of us who would wish for the Chinese people to achieve democracy, respect for human rights, and the rule of law, and wish for a China which is a cooperative partner in the rules-based world order. But, quite frankly, his argument is not very convincing, to this reader at least. It is all too neat and simple.

China has always been changing, and one can imagine many different scenarios for future political change in China. But is an internal CCP coup really likely? Xi has surrounded himself with many loyal supporters who would do their utmost to prevent a coup, and they are supported by China’s high-tech surveillance. And public support for Xi and the CCP is reportedly quite high at the moment.

Political change, if it were to occur, would more likely come from other sources. There could be a revolt by private sector business elites in response to things like the current tech crackdown underway in China. A popular uprising could occur again, such as in 1989. Instability could also emanate from the periphery like Xinjiang, Tibert, Inner Mongolia, and Hong Kong. And while there are many possible sources of political change, it is far from certain that political change would lead to democracy. A group of leftists could take China backwards rather than forwards. And chaos and instability could easily result. In short, the possibilities are endless, and it is not clear that Garside’s scenario is the most likely.

All that said, Garside’s book contains many interesting ideas and information, and is a stimulating and entertaining read. Moreover, it raises the very important question of possible future instability in China, a country where peaceful power transitions have been rare. In the past, Chinese political instability was usually relatively self-contained. But with China having, by some estimates, the world’s largest economy and having economic and political linkages spanning the entire global, any future political instability will be felt by everyone. In short, the risks are enormous.