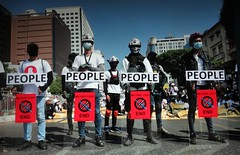 Glen Robinson analyses the recent coup in Myanmar.
On the morning of Feb 1, 2021, the Myanmar military, staged a coup and disbanded the democratically elected government. This sent shivers up and down the spine of those who could remember the 1988 coup by the military, as it was a particularly bloody period in Myanmar’s history.  In this paper the possible reasons behind the present coup are explored

The recent history of this beautiful country has been explored in Myanmar Historical Report April 2021, this explains the period immediately following the 1988 coup until the present day.  This describes the process through which the country travelled to arrive at a situation in which a bi-cameral system of government had been democratically elected, with 25% of the seats in each of the 2 houses of parliament being reserved for the military appointees.

There was a considerable amount of optimism and enthusiasm in the period from 2008 through to 2016/2017, but that enthusiasm was waning by the end of 2017.  Never-the-less, the country was moving in the right direction, but there were several issues which caused concern, one was the lack of action on the social issues, another was the situation with the Rohingya, which had been an uncomfortable issue for many years, but nobody was keen to address it properly, and the other non-spoken issue was the matter of the “states”.

There are 14 [+/-] virtually independent states making up the Republic and they tended to be fractious and often they demonstrated their independence to the central government. But the biggest issue was in relation to the Rohingya from the Rakhine state.  They have been in Myanmar for generations but are not citizens and therefore are excluded from all government support

The coup and the Tatmadaw are incredibly unpopular and subject of significant opposition by many sections of the populace. There has been increasing violence emanating from the military and the death toll is significant and rising, and the people are extremely defiant and seem to be deliberately ignoring the dangers which anti-military demonstrations present.

Given the almost benign and almost friendly beginning, this inextricable move for the military to become the “bad boys” has been traumatic.  At the beginning, the words from the military were accepted as being a legitimate course of action, but that has changed and now it is a “them and us” situation.

There are sections of the military and the police which do not support the coup, but of course must follow orders.


REASONS BEHIND THE COUP

The actual cause or the touch point is not clear as there are almost certainly several issues contributing to this.  The issues most likely to be a significant contributor are discussed in the following paragraphs.

Tatmadaw Threatened by Election Result.  In the November 2020 election, the NLD, Aung San Suu Kyi’s party had a resounding success, and this has been promoted by some that the Tatmadaw was threatened by this a launched the coup.  It is certainly possible that it was a factor, but it is highly unlikely that it was a significant factor.  The NLD had resounding successes in the 2012 by-election and the 2015 general election and no issues were noticed.

Claim of Electoral Fraud.  The Tatmadaw claimed there was electoral fraud associated with the 2020 election, but that was basically ignored which annoyed the military.  Given that the claim was not supported by any credible authority it is difficult to give it any credence.  It may have been an irritant to the military, but it is difficult to see any action being precipitated because of it.

General Due for Retirement. The commander-in-chief General Min Aung Hlaing is due for retirement this calendar year, and it cannot be avoided under military law.  That means he would become a normal citizen and be subject to the rules and laws of an ordinary citizen, including the actions he has taken as the Tatmadaw commander.  Naturally, he wishes to avoid the difficulties, and probable goal term which would prevail.  He apparently tried negotiating with Aung San Suu Kyi to avoid the criminal future, but she refused to budge, and he is faced with being treated as a criminal and undergoing the appropriate treatment.  Both parties are known to be resolute in their beliefs and do not move easily from a particular standpoint, so the general took the easy way out, and opted for a military coup.

Aung San Suu Ky.  She is known to be difficult in discussions and quickly takes a position and refuses to budge from it.  She refused to undertake many of the social reforms expected by the populace and refused to address the confrontational stand taken by several of the “states”.  In this group was the Rohingya whose issues were ignored by ASSK, together with the raft of social issues which should have been addressed.

Her refusal to address these issues angered the General to the point of action.  The situation certainly changed, but it is not known why.

There is considerable speculation on what precipitated the coup, and what made the nature of it change from a benign one to an extremely hard line one, but no speculation seems convincing.  It is more likely that it was several issues, individually not sufficient to cause the coup, but when aggregated did so.  Unfortunately, the General is probably the only one who has the complete answer.

It is hoped that the government will be handed back to the people as a matter of urgency and this beautiful country can return to normal.

Glen Robinson is a co-founder and director of Asean Focus Group with Peter Church which was formed in 1990 to provide advice and assistance to those organisations which wished to take a commercial presence in ASEAN and other Asian countries.   A number of years ago the company entered into a joint venture with Venture group and both trade as AFG Venture Group.  Glen is a director of the Australia Thailand Business Council and a Councillor of the Australia Institute of International Affairs NSW.  The views expressed in this article are solely those of the author and not of any of the companies or organisations mentioned.
Tags: asean