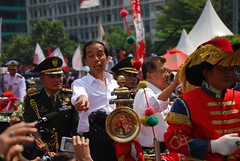 Indonesia – a country of disappointments.

Ben Bland shows even pessimists can be gulled by Joko Widodo’s charms, according to John West.

Ben Bland paints an insightful and intriguing portrait of Indonesia's leader in his new book, Man of Contradictions: Joko Widodo and the struggle to remake Indonesia. Jokowi, as the president is known, is a fascinating personality – a man who leapt from being a furniture maker to city mayor (of Solo and Jakarta) and then on to lead Indonesia.

But behind this picture of Jokowi is also a troubling image of Indonesia, the world’s fourth most populous country, with the world’s largest Muslim population. Bland quotes former Indonesian Finance Minister Chatib Basri, who once told him: “Indonesia always disappoints. It disappoints the optimists and it disappoints the pessimists too.”

But to my mind, the clear message from Bland’s text is that optimists will be far more disappointed than the pessimists.

As Bland argues, the rise of Jokowi to the presidency of Indonesia is a testimony to the country’s democracy, and its free and fair elections. And yet, under Jokowi’s watch, there has been a troubling deterioration in Indonesia’s democratic governance.

Indeed, Indonesia’s new experiment with democracy has, in many respects, “been hijacked by the dark forces that held the country back before”. And by his second term, this “outsider had become firmly embedded in elite politics”.

Bland highlights many of Jokowi’s actions which have undermined Indonesia’s already flawed democracy – notably, diluting the nation’s anti-corruption agency, creating his own family political dynasty, and his appeasement of conservative Islam and intolerance and of violence towards religious minorities and the LGBT community. Despite strong electoral support from Papua, Jokowi continues with the ineffective efforts to use security forces to crush separatist rebels.

Overall, Jokowi, a one-time man of the people, is said to run “the palace more as an imperial court than a chief executive’s office”, and sees the military as a balancing force against his various political opponents.

Indonesia’s notorious weakness in handling natural disasters and other crises has been evident through the Covid-19 pandemic. Indeed, “rather than rising to the challenge … Jokowi has struggled under the immense pressure”. He withheld information about the pandemic, and vacillated between taking the necessary mitigation measures and suggesting there was little to worry about.

The pandemic has highlighted the woeful state of the country’s health system. It lags way behind countries such as South Korea, China, Singapore and Malaysia in terms of hospital places, critical care beds, doctors and money spent on health. And a study by the London-based Centre for Mathematical Modelling of Infectious Diseases from March estimated that as few as 2% of Indonesia’s coronavirus infections have been reported. It is ironic that Jokowi, a leader who prides himself in being responsive to the concerns of the public, has not done more to improve the country’s health system.

Many analysts had expected great things from the Indonesian economy. For example, a few years ago, PWC predicted that Indonesia could be the world’s fourth biggest economy by the year 2050. And Jokowi himself has declared his ambition for Indonesia to become a developed nation by 2045.

But while this “king of infrastructure” has made progress in reducing Indonesia's massive infrastructure deficit, Bland argues that Indonesia is still riddled with heterodox economic thinking which defies the laws of economic competitiveness. “With a deep-seated aversion to liberal economics, Indonesia will not wholeheartedly embrace free markets and free trade any time soon,” Bland writes.

Jokowi has been nationalising some of the country’s biggest energy projects, and prioritising the development of state-owned enterprises, many of which are badly managed and riddled with corruption. And while foreign investment has helped power ahead economies such as Singapore, Malaysia and Thailand, Indonesia still sees it as a tool of colonial oppression, according to Bland. My impression is the immense power of Indonesia’s oligarchs and military is the main factor blocking foreign investment.

It is hardly surprising that the GDP per capita of a country such as Thailand, which has suffered from much greater political instability, is some 55% higher than that of Indonesia, according to World Bank data. Indeed, the Indonesian economy has been trundling along with a growth rate of 5–6%, about half that of countries such as China and Japan in their high-growth periods. And while a demographic youth bulge can create a “demographic dividend”, Indonesia is wasting its opportunity by not creating enough jobs.

Jokowi has also been feted by many Western politicians and pundits who have been seduced by his charms. Former Australian Prime Minister Malcolm Turnbull called him “one of the most important leaders in the world” and “a cool cat in every respect” in his recently published memoir.

Indeed, countries such as Australia and Japan have been pinning their hopes on Indonesia being part of a middle-power alliance that could balance the increasingly assertive China. But as Bland quite rightly points out, “Jokowi has no time for great power politics”. He is more interested in attracting financial assistance and China has not disappointed as it is now financing many infrastructure projects.

An interesting insight Bland provides into Indonesia’s foreign relations occurred when Moeldoko, Jokowi’s chief of staff, met with the Chinese ambassador to Indonesia in late 2019. While the West was lambasting Beijing’s suppression of the Uighur people in Xinjiang, Moeldoko expressed sympathy for the Chinese government, rather than his fellow Muslims. He was obviously more worried about Indonesia’s own separatist movements, notably in Papua.

Bland’s book makes a major contribution to our understanding of Indonesia, as well as Jokowi, the main subject. But as I reached the end, I was yearning for more of his views on what could happen next in the Indonesia story. As he concludes briefly, there are indeed limits on what is possible in Indonesia. Australia needs to have a much better understanding of these limits, and learn to cooperate more effectively and realistically with its important neighbour.

This article by John West was first published by the Interpreter of the Lowy Institute on 11 September 2020.

- Ben Bland.  Man of Contradictions: Joko Widodo and the struggle to remake Indonesia.