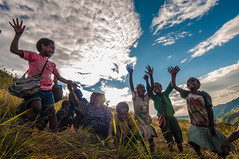 The people of West Papua, Indonesia have been sold down the river by international politics. They are now fighting ever more ferociously for their independence.

West Papuans are the neighbours and ethnic brothers and sisters of those in Papua New Guinea, and have virtually no cultural links with the rest of Indonesia.  The only link is their shared colonial history, as both were part of the Dutch East Indies.  And yet West Papua was shoehorned into the new Indonesian nation following the latter’s independence after World War II.

Initially after Indonesian independence, West Papua remained a Dutch colony, and in principle, it was being prepared for independence.  But Indonesia’s President Sukarno was determined that West Papua would become part of Indonesia.  And out of fear that Indonesia might join the Soviet Camp, the US manoeuvred the outcome in Sukarno’s favour.  A sham referendum was held in 1969, in which little more than 1000 Papuans, out of a population of around 800,000, were allowed to vote , and West Papua became part of Indonesia. Since being folded into Indonesia, West Papua has been a veritable battleground.  And half a century on, the battle for freedom and independence is only deepening, as John Martinkus writes in his new book, The Road: Uprising in West Papua.

Martinkus reiterates some well-documented, though not well-known, history of West Papua.  The territory has been basically occupied by Indonesian military and security forces who have waged a struggle against the West Papuan pro-independence movement.  Large numbers of West Papuans have been killed, with many more raped, tortured, or imprisoned.  For an Australian, it is all the more shocking that these acts have taken place only 400 kilometres from Australian territory.

Migration to West Papua from elsewhere in Indonesia has been very substantial, thereby disenfranchising the West Papuan people.  A strong undercurrent in the relationship is the attitude of Indonesians who consider West Papuans to be primitive natives.  Martinkus recounts an incident in Surabaya, Java where West Papuan students were accused of being “monkeys” and attacked by the locals, while the Indonesian police just stood by.  This incident unleashed a dam of emotion and riots in West Papua.

At the heart of the West Papua drama are the region’s immense natural resources, especially copper, gold, and timber.  In particular, this is where the Grasberg Mine, the world’s largest gold mine and third largest copper mine, is located.  It is owned by the American mining giant Freeport-McMoRan and is Indonesia’s largest foreign taxpayer.  Nevertheless, the poor Papuans enjoy very little benefit from the mine, which has inflicted severe environmental damage. As highlighted in the second subtitle of the book — “the war is not ending, it is beginning” — the situation in West Papua is deteriorating.

Martinkus argues that the West Papua conflict has gone through generational cycles.  While around 20 years ago, the conflict had reached a stasis, there has been a dramatic turnaround of events in recent years.  A new generation is now taking up arms.  They are now better educated and angrier.  They are also better armed.

In the early 2000s, the Indonesian government was throwing lots of money at the Papuan people with the hope that an “autonomy plan” would help solve the conflict.  But some of this money dribbled off to rebel groups.  With Indonesia being the third largest producer of small arms in the world, the rebel movement has been able to arm itself as well as the Indonesian armed forces.

But a major driver of renewed conflict has been “The Road,” which is still under construction.  This Trans-Papua Highway is designed to link the northwest of West Papua to the southeast, and to fulfill the Sukarno-era boast of a unified Indonesian nation, according to Martinkus.

This road is pushing into areas where there had never been permanent Indonesia occupation – the heartland of the indigenous people of West Papua and also the Free Papua Movement.  The West Papuans fear that the road will take arable land and that Jakarta-based companies will  convert the land to palm oil plantations.  As the Grasberg Mine is gradually depleted, the road could also open up more mining.  The spine of the mountain is full of gold.

But the Indonesian government would never accept that.  Indonesian President Joko Widodo agreed to a UN Human Rights Council request for a mission to West Papua, but he changed his mind when his generals said no.  The Indonesian military is still smarting about losing East Timor to independence.  Indeed, “Jokowi, despite being supported by an overwhelming majority in Papua at the election of 2014, has done nothing in the time since,” according to Martinkus.

Indonesia’s actions and policies in West Papua have been facilitated by its closest neighbor, Australia, which has turned a blind eye as it does not wish to disturb the important relationship.  According to Martinkus, only a nudge from the US would encourage Australia to push for more autonomy for West Papua.  But the US would have to disengage from its commercial interests, which are a major reason why the conflict continues.

Martinkus, who has covered conflicts in Iraq, Afghanistan, Sri Lanka, Burma, East Timor, and Aceh, claims that he has not seen a people more systematically oppressed and isolated than the West Papuans.  He is astonished that West Papua arouses such little media and public interest, especially from Australia.  Today, events in Hong Kong are a big story, but people being shot from helicopters in West Papua is seemingly of little interest.

In The Road, Martinkus provides us with a vivid and gripping up-to-date report on the tragedy in West Papua.  But it is a pity that this short book of less than 120 pages does not provide more historical background on West Papua and Indonesia in general to help readers understand the complex history of West Papua.  It remains however a very important work on a country that is destined to play an increasingly important role in the Indo-Pacific, and whose President once described Australia as its “closest friend.”