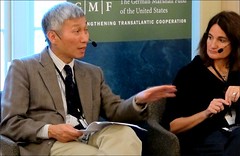 Here are the concluding paragraphs of Minxin Pei's Foreign Affairs' article, "China’s Coming Upheaval: Competition, the Coronavirus, and the Weakness of Xi Jinping".

"The events of the past few months have shown that CCP rule is far more brittle than many believed. This bolsters the case for a U.S. strategy of sustained pressure to induce political change. Washington should stay the course; its chances of success are only getting better and better."

"... the Chinese party-state’s botched initial response to the outbreak of the novel coronavirus and the subsequent eruption of public outrage should make them think again. The worst public health crisis in the history of the People’s Republic of China has revealed a number of significant weaknesses. The regime’s capacity to collect, process, and act on critical information is much less impressive than most would have anticipated. Considering the enormous investments in disease control and prevention that China has made since the SARS outbreak in 2002–3 and the implementation of laws on emergency management in 2007, it has been staggering to see how thoroughly the Chinese government initially mishandled the new coronavirus epidemic. Local authorities in Wuhan—the epicenter of the outbreak—concealed critical information from the public even after medical professionals sounded the alarm, just as Jiang Yanyong, a veteran army doctor, did in 2003 about SARS. Although they received reports from Wuhan about the spread of the virus in early January, most members of the senior leadership did not take any serious action for two weeks.

The crisis has also revealed the fragility of Xi’s strongman rule. One likely reason that Beijing failed to take aggressive action to contain the outbreak early on was that few crucial decisions can be made without Xi’s direct approval, and he faces heavy demands on his limited time and attention. A strongman who monopolizes decision-making can also be politically vulnerable during such a crisis. A series of decisions Xi made after the Wuhan lockdown began—such as sending Li, the premier, to the epicenter of the virus instead of going himself and remaining unseen in public for nearly two weeks—undermined his image as a decisive leader at precisely the moment the system seemed to be rudderless. He reasserted control only weeks after the crisis began—by firing the party chiefs in charge of the city and the province where the outbreak started and imposing tight censorship rules on the press and social media.

But the brief window during which Chinese social media and even the official press erupted in outrage revealed just how tenuous the CCP’s control over information has become and highlighted the latent power of Chinese civil society. For unknown reasons, China’s censorship system performed poorly for about two weeks after the lockdown in Wuhan was announced. During that period, people were able to learn how the government had muzzled medical professionals who had tried to warn the public. Criticism of the government reached a peak when Li Wenliang—a doctor who in late December was among the first to warn Chinese authorities about the danger of COVID-19, the disease caused by the novel coronavirus, and who was subsequently interrogated and silenced by local police—died of the illness on February 7, showing that the CCP could lose public support quickly in a crisis situation."