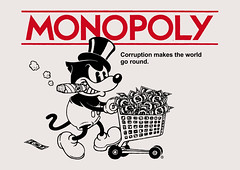 Corruption is an emotive word which can mean different things to different people, argues Glen Robinson..

Every country has corruption in one form or another and the prevalence is extremely variable, but the most visible is the expectation that a payment will be made for the provision of a service or rights to undertake some actions.  It is widely expected by foreigners undertaking commercial activities in the Asian region that “facilitation payments” or corruption by another name will be required for most services provided to them. In other countries the corruption is mainly at the corporate level and is in the form of “looking after your friends” or reciprocation for previous benefits.

I have just finished reviewing the “Australian Business in Asean”, the annual survey of the perception of Australian businesses operating in the region and it is conducted by the Austcham group based in Singapore.  It is an excellent source of information on the views of Australian companies in the region, and among a wide range of issues, each company was asked to identify the top 3 challenges of operating in Asean, and in 9 out of the 10 countries Corruption was in the top 3 challenges, and was recognized by almost 50% of respondents that it was a challenge

There is an  expectation by both the foreigner and the local that some form of “facilitation fee” is appropriate, so most do not even query the activity, however it seems counter-productive to pay a person to provide a outcome when the incentive for that person is not to provide an outcome, but keep you paying.

We prepare this presentation based on our experience 30+ years of commercial activity in the ASEAN region, providing advice and expert assistance to those organisations which wish to establish or enhance a commercial presence, and consequently there were many projects which had to be identified, promoted and activated.

Conventional wisdom says that by refusing to enter into corrupt practices some projects will not be available to you, however, our experience is that once you are known for clean projects you will be able to bypass the facilitation phase. Some examples of successful commercial activities are: -

Thailand: achieved a change in regulations in relation to import-export on behalf of the client
Indonesia: won major infrastructure projects on behalf the client
Vietnam: won major contract purchases from the government on behalf clients

None of these involved any bribes, although from the outsider’s point of view, one would have expectations that payments were made, as that is the expectation.  That is the operative word “EXPECTATION”, on the part of the foreigner and on the part of the local.  However, a fundamental question is how does the foreigner avoid the expectation of paying a bribe? I am not sure that the following is the complete answer, but it seems to work in many circumstances.

The first requirement is that the foreigner must be prepared to consistently decline to participate and be prepared to walk away.  This may be seen as being difficult, but to avoid corruption, the declining of a project is a must.  The foreigner may use it not only to stiffen his resolve, but the effect on the local is quite dramatic, as he knows your stand is real and you both know that the next project you or he brings will be corruption free.

In both cases it also means that you understand that the local contacts rely on trust and friendship; however, this takes time to develop and that it also means it will be necessary to return any favours which are made to you.  It will be important that the local understand that return favours should not be seen as a bribe but as a genuine desire for your local colleague to participate, as you would for any colleague. But it should not be seen as a payment for services rendered

The other fact is one of trust; there are many pundits who indicate that trust must be developed, and that is absolutely true, however possibly of more importance is avoiding placing temptation in front of your colleague.

As a good example of being prepared to walk away from a project, some years ago a government contract was being considered in an Asian country. The CEO of this government facility was somebody with whom I knew but I did not have a personal connection with.  One evening two young fellows came to my apartment and introduced themselves as the nephew of the CEO, and asked me what I was offering as an inducement to win the project. They told me that the opposition was offering significant dollars in cash plus vehicles, et cetera, and I responded that I would offer nothing except that the corruption commission would not chase them. I won the contract.  I was certainly prepared to walk away if we were not successful.

The biggest problem with bribery and corruption is the expectation, and when this expectation is overcome through alternatives, clean business can be established

The perception of many people about doing business in Asia is that it involves corruption of one type or another. It is a persistent and almost all pervading perception, so that when one encounters it for the first time there is no expectation of avoiding it or seeking an alternative.

Glen Robinson has spent the last 30+ years focussing on the establishment and development of cross border commercial alliances, joint ventures, mergers and acquisitions, particularly in the manufacturing, processing and distribution areas, and particularly targeted to Asean. These corporate advisory activities are based on many years’ experience in management consultancy, and he has worked with a wide range of industries from agriculture, government through to manufacturing, distribution and service industries. He initially gained his Asian experience as chief executive officer for the Asian subsidiaries and joint ventures of a major international manufacturing and marketing organisation.

Glen has sat on the board of many Asian related business organisations and has for many years advised a number of Foreign Investment Boards in the Asian region.