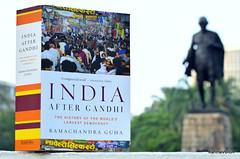 India after Gandhi — a book review

Guha writes that “the pages of this book are peppered with forecasts of India’s imminent dissolution, or of its descent into anarchy or authoritarian rules”. But as he notes “that India is still a single nation after sixty testing years of independence, and that it is still largely democratic — these are facts that should compel our deeper attention”.

And so, Guha tales us on a journey through India’s history as an independent democracy. This updated and expanded edition, published in 2017, some ten years after the original, is richer for having included the rise to power of current Prime Minister Narendra Modi.

The journey of this book is a long one — almost 800 pages, before you can read another 100 pages of notes. But the journey is well worth the ride, with rich detail of all the events and personalities in the life of this entrancing nation.

There are too many stations in the journey of India to repeat them all. So just the main ones will suffice.


A potted history of India

Following decolonisation and independence in 1947, the bloody “partition” of Muslim Pakistan from secular India resulted in massive movements of people across the borders in both directions, and very large numbers of refugees.

Over 500 independent princely states (which were never colonised by the British) were convinced to join the Union. But the status of Jammu and Kashmir was never cleanly resolved, and remains a major bone of contention with Pakistan today.

The Constitution of India was drafted from December 1946 to December 1949, and came into effect in January 1950, and may be the longest in the world. The first general election was held in 1952, and was comfortably won by Nehru’s Congress Party, the main organisation driving the independence movement.

India adopted a foreign policy of non-alignment, but maintained close relations with the USSR.

The domestic map of India was redrawn with provinces created on the basis of local languages. The integrity of the state seemed under constant threat by groups like the Naga tribes seeking independence, as well as the election of communist state governments in Kerala and West Bengal.

In 1959, the Dalai Lama escaped Tibet to be welcomed in India, much to the displeasure of the Chinese government. Then in 1962, China gave India a humiliating defeat in a brief war, ostensibly over a disputed border. Relations between China and India remain tense to this day.

Indira Gandhi became India’s new leader in 1966. To the great annoyance of Pakistan, she led India into the Bangladesh Liberation war, which resulted in defeat for the Pakistan military and the transformation of East Pakistan into the independent state of Bangladesh.

Democracy seemed to be threatened when Prime Minister Gandhi declared a state of emergency in June 1975. But the resilience of Indian democracy was evident when Gandhi’s Congress Party lost government in the 1977 elections, the first time Congress was out of power since independence.

Both Indira Gandhi and her son Rajiv, who followed her as Prime Minister, were tragically assassinated.

A financial crisis in 1991 became an opportunity for economic reform. India’s economy has since grown strongly, with the IT sector being a key driver. India is now seen as an emerging economic power, one of the leaders of the Asian century.

Nevertheless, poverty remains a major issue, in part because of the failure of the government to provide adequate education and health services. And by any objective standard, India is an “environmental basket case”.

After ten years of lack-lustre leadership from the Congress Party, the Bharatiya Janata Party (BJP), under the leadership of Narendra Modi, was elected to government in 2014. Unfortunately, the great wisdom of India’s first prime minister, Jawaharlal Nehru, with his powerful slogan of ‘unity in diversity’, has been ceding place to a ‘muscular majoritarianism’, with a pro-Hindu and anti-Muslim discourse by the country’s current leadership. As Nehru once said, one of the greatest difficulties since Independence was “creating a secular state in a religious country”.

Guha signed off this second edition of his book in August 2016, some three years ago. But his Epilogue chapter still remains very powerful. He writes that: “the astonishing project of creating a nation without a common language, common religion or common enemy has, thus far at least, largely succeeded … No part of India is likely to secede soon, if at all”.

India has been held together by the values of its constitution, namely, equality for low castes and women, an inclusive model of economic growth, respect for different faiths, and a strong federal system in which the rights of provinces are clearly defined and safeguarded.

The weak points of India’s are the institutions of democracy, according to Guha. “Most political parties have become family firms. Most politicians are corrupt, and many come from a criminal background. India’s law-makers are too often law-breakers as well.”

Guha continues that “The state is, on the one side, weak and incompetent when providing basic services such as education and health care; but, on the other, savage and brutal in its suppression of discontent.”

And “upper-caste Hindu males still command disproportionate privileges in the everyday life of the Republic”, with Dalits, women, Muslims and tribals remaining “less than equal citizens of the land”.

This Epilogue chapter is very insightful and certainly worth the wait of 800 pages of reading.

Since this book was published, in May 2019 India saw the re-election of the BJP under Prime Minister Modi, with an increased majority. Perhaps the most controversial step of the new government was to revoke the special status accorded to Indian-administered Kashmir in its constitution, the most far-reaching political move on the disputed region in nearly 70 years.

These events inspired Ramachandra Guha to write:"I would downgrade my country’s democratic credentials. Given the lack of any sort of credible opposition to the BJP, the atmosphere of fear among religious minorities and the attacks on a free press, we are now a 40-60 democracy, and — if the recent abuse of state power in Kashmir is any indication — well on the way to becoming 30-70."

- Ramachandra Guha (2017). India After Gandhi: The History of the World's Largest Democracy