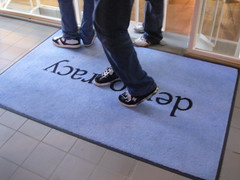 John West reviews Joshua Kurlantzick’s excellent book in which he argues that democracy is in retreat worldwide, notably in Asia where strong economic development should foster democratisation.
With the end of the Cold War about three decades ago, democracy fever was in vogue. Francis Fukuyama wrote his much celebrated book on "The End of History", proclaiming the global victory of the Western values of pluralist democracy and market economy.

In Asia, the 1986 "People Power" movement in the Philippines inspired the world as the nation's middle classes overthrew the corrupt and rotten regime of President Ferdinand Marcos. And in the Asian Tigers of South Korea and Taiwan, authoritarian regimes surrendered to popular pressures, and opened the way for democratic transitions. This warmed the hearts of political scientists who believe that economic development and middle class development facilitate democracy.

But in more recent years, democratisation has been turned on its head worldwide, most notably in Asia, as Joshua Kurlantzick argues in his excellent book, "Democracy in Retreat: The revolt of the middle class and the worldwide decline of representative government".

Kurlantzick starts his analysis with the case of Thailand, a US Treaty Ally, which was once a poster child among emerging economy democracies. Following the democratic election in the year 2001 of authoritarian populist Thaksin Shinawatra, Thailand descended into a series of military coups and civil unrest. Today, Thailand's politics are in the firm grip of the military, and there is no sign of a meaningful return of democracy on the horizon. The author also notes the role of the military behind the scenes in the Philippines, and not-so-behind-the-scenes in Pakistan.

If Kurlantzick had only waited a few more years to write his book (it was published in 2013), he would have had even more material to support his thesis. For example, the Philippines has gone even further off the rails with the democratically-elected murderous, authoritarian regime of Rodrigo Duterte. The democratic hopes for Myanmar have disappeared into thin air with the massive human rights abuses of the country's Rohingya population.

Things are no better in Asia's giants. In Xi Jinping's China, social and political repression have returned with a vengeance. And India's flawed democracy is suffering from Hindu nationalism, with ethnic minorities suffering from discrimination, prejudice and persecution.

What is behind this surprising retreat of democracy? Kurlantzick identifies several factors.

While Western democracy evangelists preached the economic benefits of democracy and the neoliberal policies of the Washington Consensus, too few new democracies saw such benefits. At the same time, authoritarian China enjoyed turbocharged development. Further, electoral democracy with weak institutional development increased the opportunities for corruption - or at least made abusive corruption more visible. Some Asian countries are suffering from “authoritarian nostalgia”.

Perhaps Kurlantzick's key point is that some middle classes have counterintuitively turned against democracy. In the minds of many political scientists, it is the middle classes that drive democracy. And that certainly seems to have been the case in the Philippines' People Power movement and democratisation in Korea and Taiwan.

Why would Asia's middle classes support authoritarian regimes? As I have seen with my own students, China's middle classes and elites have been great beneficiaries of China's unequal development. They have no desire to share the benefits of development with country bumpkins who migrate to China's slick cities to do jobs which are "dirty, difficult and dangerous", or with China’s poor rural population.

In a similar vein, Kurlantzick notes that "If the franchise is extended to everyone, and if the poor, who make up the majority of the population in most developing countries, band together behind one candidate, they could elect someone determined to reduce the economic, political and social privileges enjoyed by the middle class".

He argues that the Philippines is the classic example of a country where the middle class drove democratisation, but has now switched to be against democracy. And that in cases like Taiwan’s President Chen, some former democratic activists become new corrupt authoritarians.

Not surprisingly, some middle classes are now attracted to China’s model of authoritarian capitalism -- a model that did not exist during the Cold War, when the world was split between communism and democratic capitalism.

Kurlantzick also argues that the West, notably the US, has not done an effective job in promoting democracy, even though it is a key plank of Western foreign policy. Moreover, many Western countries are far from being exemplary models of democracy. This point is even more valid today, than when the book was written, following the rise of US President Donald Trump, and Brexit. The author also notes that emerging economy democracies like Brazil and South Africa have been reluctant to become democracy promoters.

While Kurlantzick finishes his book with some thoughtful "Prescriptions for the Future", there is a strong case for being a democracy pessimist. As I note, in many ways the state of democracy has only worsened in Asia in the five years since the book was published.

But there are also some rays of hope. The fact Malaysia's new government defied its phoney democracy to be elected to tackle the rampant corruption of the previous prime minister is a very good development. And Indonesia's President Jokowi has been doing a pretty good job in what has become one of Asia's most successful democracies.

Although Kurlantzick only analyses democracy in emerging economies, the most worrying development is the deterioration of democracy in Western mature countries. Even Australia has become a flawed democracy in recent years as it has experienced political instability through a revolving door of prime ministers, and where a right wing government tried to protect the country’s financial sector from investigations into its deep corruption, now revealed in a Royal Commission.

In conclusion, some five years after its publication, Joshua Kurlantzick’s book on Democracy in Retreat remains essential reading for anyone interested in international politics, especially in the Asian region.

- Joshua Kurlantzick. Democracy in Retreat: The Revolt of the Middle Class and the Worldwide Decline of Representative Government. January 2013.