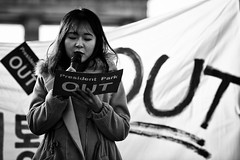 The impeachment of Korean President, Park Geun-hye, highlights Korea’s deep corruption. But it is also a testimony to the strength of Korea’s democratic institutions, writes John West.

From authoritarianism to democracy

Korea experienced a horribly authoritarian period in the 1960s and 70s under President Park Chung-hee, the father of the deposed Korean president. But Korea's political space was always contested – especially by two individuals who became president in the 1990s, Kim Young-sam, and Kim Dae-jung. And protests by Korea's well-educated students were a recurrent feature.

In 1987, in the midst of widespread student and trade union protests, designated presidential successor Roh Tae-woo made the historic decision to hold elections, which he won. Korea’s democratic transition was confirmed by the election in 1992 of President Kim Young-sam from the centre-right wing Democratic Liberal Party. This transition was most significant in that Kim, a democratic activist, succeeded Roh, who was a former army general, closely linked to Korea’s authoritarian past.

The 1997 election of President Kim Dae-Jung from the centre-left wing party, National Congress for New Politics, demonstrated the capacity of Korea’s new democracy to accept the alternance of power between right and left wing presidents. Kim Dae-jung had survived years in jail and several assassination attempts, and is often referred to as “Asia’s Mandela”. The growing maturity of Korea’s democracy was demonstrated by the election of another centre-left president, Roh Moo-hyun, in 2002, followed by two right wing presidents, Lee Myung-bak (elected 2007), and Park Geun-hye (elected 2012). As Freedom House has observed, "Political pluralism is robust [in Korea], with multiple parties competing for power and succeeding one another in government".

Korea’s transformation from an authoritarian regime to a democracy represents one of Asia’s greatest postwar achievements. In the space of a generation Korea moved from being a recipient of foreign aid to being a member of the OECD, the club of advanced democracies and aid donors. As former OECD Secretary General Donald J. Johnston said, “Korea has set an example for other emerging market economies to follow”.

Elements of authoritarianism live on

But Korea’s democracy is still very much tainted by the country’s authoritarian past. Freedom of the press is greatly compromised, and getting worse, according to Reporters Without Borders, which ranked Korea only 70th in the world in 2016 (out of the 180 countries surveyed), ten places lower than in 2015. The Park government did not entertain criticism, and threatened media independence. Public debate about relations with North Korea is taboo.

And most troubling, as of March 2016, 74 trade unionists including the President of the Korean Confederation of Trade Unions (KCTU) were in prison. 504 other KCTU members were charged with “obstruction of traffic” in relation to a demonstration held in 2015. When Korea joined the OECD in 1996, it committed to reform its labour law to bring in line with the standards of the International Labour Organisations (ILO). Yet, basic labour rights, including the right to organise and to bargain collectively are not observed in today’s Korea, according to Trade Union Advisory Committee to the OECD (TUAC). State interference in trade union activities remains the norm.

“Regrettably, twenty years after its accession, Korea is still far from having built a system of industrial relations based on ILO standards that can manage conflict, reduce inequality and ensure social progress. In the past three years, repression against unions and the criminalisation of their activities appear to have returned,” said John Evans, TUAC General Secretary.

Corruption is also endemic in the highest levels of Korean political and business life. Indeed, all of Korea’s democratically elected presidents or their families have been implicated in corruption scandals. For example, at a time of corruption scandals involving his family, Roh Moo-hyun committed suicide in May 2009. And President Kim Dae Jung's historic peace summit in June 2000 with North Korean leader, Kim Jong Il was also tainted by suicide. Hyundai's Chairman Chung Mong Hun took his life while he was also facing criminal charges for his part in a deal to allegedly pay a bribe of $500 million to Kim Jong Il for participating in the summit.

Even by Korean standards, the corruption scandal that brought down the presidency of Park Geun-hye in 2016-17 was bizarre. President Park’s close friend Choi Soon-sil, a “Rasputin-esque” figure and daughter of a shadowy cult figure, extorted at least $70 million dollars from Korea’s chaebols for two of her foundations -- allegedly in collusion with Park. Samsung, the veritable symbol of Korea, was also dragged into this scandal. In February 2017, its head, Lee Jae-yong, was arrested and indicted on bribery and embezzlement charges. Samsung allegedly gave $38 million to Choi in return for favours, notably government support for a merger of two Samsung affiliates in 2015 that helped Lee inherit corporate control from his incapacitated father.

President Park’s scandal is even murkier. She was seemingly possessed by Choi who is alleged to have dictated or influenced all manner of official and personal decisions taken by Park. Choi would have had access to confidential documents and information of the President. The scandal was allegedly broken by Choi’s “toyboy” who apparently fell out with her. Choi has been charged with abuse of authority, coercion and fraud.

As this scandal became public from October 2016, there were massive protests against President Park every Saturday evening in Seoul for two months. On 9 December 2016, the National Assembly passed a motion recommending impeachment of Park. Korea’s leadership was put in the hands of an Acting President, Hwang Kyo-ahn. Then on 10 March 2017, the Constitutional Court unanimously upheld the impeachment. Park has now lost her presidential immunity and could face a criminal trial. Elections for a new President will be held in May 2017.

Moon Jae-in, head of the left-of-centre Democratic Party, is the favourite to win the election -- Park’s right wing party is now in disarray. Like liberal presidents before him, Moon will likely prefer to reopen dialogue and cooperation with North Korea, rather than taking the hard line of Park’s administration and the US. While it is true that tough sanctions have not stopped North Korea from developing nuclear weapons, nor did dialogue and cooperation in the past.

Korea has also been without a president since Donald Trump assumed the US presidency. A softer approach towards North Korea would generate significant tensions with the US, its close ally which has some 30,000 troops stationed in Korea to defend it against the North. Korea may also have to deal with Trump’s protectionist threats and the possibility of the US seeking to renegotiate their free trade agreement. Korea’s export-dependent cannot afford protectionism.

Relations with China are very tense, as China is objecting to the US’s installation of the Terminal High Altitude Area Defense (THAAD) system, ostensibly to protect Korea from missiles from the North. China is concerned that it will enable the US to spy into its territory, and is imposing economic sanctions on Lotte, the Korean company that provided the land for the THAAD installation. China is also stopping its tourists from visiting Korea. Relations with Japan are also in bad shape in light of popular opposition to Park’s deal with Japan to resolve the longstanding comfort women issue.

As Korean leaders including Park have proposed in the past, the new Korean President will need to break the cosy ties between the chaebol and the government. A close partnership between big business and government was critical for launching Korea’s rapid economic development from the 1960s. But Korea’s chaebols are now arguably more powerful than the government, and the collusive relationship between the chaebol and government is greatly compromising Korea’s democracy, and is at the heart of Korea’s big corruption problem. On the domestic economic front, Korea also has a plethora of challenges like high youth unemployment, inequality, and weak growth.

The new President should also draw the lessons of the Park-corruption case, and propose reforms to Korea’s constitution and political system, such as reducing the power of the presidency. One heartening point that we can draw from President Park’s corruption scandal is that Korea’s democratic institutions have functioned well, with Park having to face up to the will of the people and the rule of law. They give hope that Korea could reform its democracy and come out stronger in the end. The widespread protests are also perhaps evidence that Korean citizens are democratic at heart, something we cannot yet say about Japan.
Tags: asia, korea, korean politics, korean corruption, korean democracy