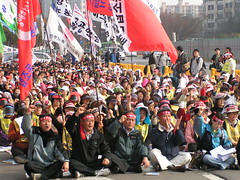 Not one Asian country would have a “full democracy”, writes John West.
“The Communist Party are the lawmakers, but they do not follow the law, nor respect the constitution,” once said Chinese dissident artist, Ai Weiwei. “The problem is that the Party does not trust people, and is afraid of their power ... The Party wants to take control of everything, even in areas it is incapable of dealing with.” And yet today the Chinese Communist Party now seems more firmly in control of China than ever.

Democracy has very shallow roots and many enemies in Asia, and not only in China. Indeed, not one Asian country would have a “full democracy”, according to the Economist Intelligence Unit. Asia’s most democratic countries -- Japan, Korea, India and Taiwan – are classified as “flawed democracies”. And as mature democracy struggles to take hold in Asia, it is compromising the lives and freedoms of Asia's citizens, and imposing great costs on the economy as well.

Political scientists have much to be disappointed with about the state of democracy in Asia. There has been a long series of modernisation theorists starting with Seymour Martin Lipset who have predicted that economic development together with rising middle classes, education and urbanisation would foster democratisation. And the successful transformation of Korea and Taiwan from authoritarian regimes into democracies raised hopes that other Asian countries would follow suit.

Many have also thought that encouragement from the international community, especially from “democracy evangelists” like the US, would motivate countries to democratise. Indeed, as emerging economies climb the development ladder, they can be attracted to becoming respected members of the international community. In the case of Korea, joining the OECD was a great “badge of honour”, as the OECD is the group of rich, developed countries which stands for the principles of market economy, pluralist democracy and respect of human rights.

More recently, many analysts have also thought that the advent of the Internet could fuel democratisation. The Internet and social media are providing citizens in many non-democratic countries with unprecedented access to information, and with effective tools for social mobilisation. Indeed, Asia’s youth elite is typically tech-savvy, highly connected through social media, educated overseas, international in outlook, self confident, and as I have seen through teaching many Asian students, they are all too aware of the moral bankruptcy of many of their own leaders.

But democracy is struggling to take root in many Asian countries where the preconditions should be ripe for democracy. And democracy is not maturing as countries climb the economic development ladder. Traditional elites are engaged in a strong rearguard action in their defence of authoritarian or single party regimes.

The poverty of democracy in Asia is clearly evident from the Democracy Index 2016 of the Economist Intelligence Unit (EIU) which surveys 167 of the world’s countries. Significantly, Asian countries find themselves in the flawed democracies, hybrid regimes, or authoritarian categories, rather than the full democracy category where most Western countries are placed (except the US, which has now slipped down to a flawed democracy). This Index recognises that there is more to democracy than holding elections (“electoral democracy”). And so it should. Asia is replete with countries that administer shonky elections, and have weak institutions and rule of law. In addition to the electoral process and pluralism, the EIU index takes into account other factors, notably the functioning of government, political participation, political culture, and civil liberties.

To help understand the state of region’s politics, we would like to propose the following groupings of Asian countries:

-- Korea and Japan, Asia’s most democratic countries, which are ranked 20th and 24th respectively by the EIU, are oligarchic democracies where big business has a large influence over policy making through collusive relationships with government.

-- Hong Kong, Malaysia and Singapore (ranked 68th, 65th, and 70th) are pro-business economies which have very open markets, and are much more globalised than Korea or Japan. But these countries also have very much weaker democratic foundations than either Korea or Japan.

-- Policy-making in Taiwan (33rd ), Hong Kong (68th ), Cambodia (112th ) and Laos (151st) is subject, either willingly or unwillingly, to substantial influence from Communist China which is seeking to establish a system of client states in its neighbourhood. In recent times, Sri Lanka and Myanmar have made efforts to escape the tight clutches of Beijing. However, there are already signs that the recent election of President Rodrigo Duterte in the Philippines may result in this country becoming another client of Beijing.

-- Asia has a large number of weak and fragile democracies which are riddled with corruption, namely: India 32nd, Indonesia 48th, Philippines 50th, Mongolia 61st, Sri Lanka 66th , Bangladesh 84th, Nepal 102nd , and Myanmar 113th. The fragility of these countries was highlighted by the case of the Philippines where the failure of democracy to deliver for the poor was a major factor leading to the election of President Duterte in the Philippines. President Duterte promised and is now practicing an illiberal form of democracy through his war on drugs and crime where human rights abuses and disrespect for the rule of law are the order of the day.

-- The military has long played an important role in Asian politics, especially in three countries where the military still plays an outsized role as it controls civil governments -- Thailand (100th), Pakistan (111th), and Myanmar (113th).

-- Lastly, there are three staunchly authoritarian Asian countries -- Vietnam (131st), China (136th) and North Korea (167th ). While there are some forces pushing for more transparency, accountability, rule of law and even democracy, these authoritarian regimes remain firmly in control with virtually no immediate threat to their viability.

There are many factors which are responsible for the parlous state of democracy in Asia. For example, in reality Asia’s middle and upper classes are very often not great supporters of democracy, as they have been substantial beneficiaries of Asia’s rapid economic development, and rising inequality. Rather, they are supporters of the status quo, and often fear the possible impact of allowing the whole population to have a say in their nation’s politics. Asia’s middle and upper classes often look upon poorer, rural populations as uneducated country bumpkins, who represent a potential threat to their privileged position. And then there are many educated and middle class Asians (especially from China) who seem to want freedom and democracy, and achieve this by opting out and migrating to countries like the US, Canada, Australia and New Zealand. Recent years have seen large flows of Asian migration to these countries, together with massive investments in real estate and illicit financial outflows.

The Internet and social media have proved to be two-edged swords in the quest for democracy. While they have greatly improved access to information, many Asian governments have responded by imposing censorship controls on the Internet (like China’s great firewall), by disseminating propaganda through the Internet, and by using the Internet for surveillance of its citizens. The Internet and social media are now a dynamic battleground where activists are working to get around government controls and where both activists and governments are competing to get their messages out.

Desperate elites can also go to enormous lengths to hold onto power, as in case of Malaysia with its repeated prosecution of opposition leader Anwar Ibrahim. While Malaysia holds elections, the ruling party, the Barisan Nasional (BN), always wins. But in recent years, it has been involved in a dirty and violent struggle to hang on to power through “intimidation, electoral fraud and gerrymandering”, according to Joshua Kurlantzick.

Western democracy is painted in a bad light in many authoritarian countries, especially in China. In response to the US State Department’s annual reports on human rights across the world, the Chinese government issues its own report where it castigates the state of human rights in the US. In China’s 2015 report, it argued that money and family politics went from bad to worse in the United States, that civil rights were wantonly infringed upon with rampant gun-related crimes and excessive use of force by police, and that racial conflict was severe in the United States, with race relations at their worst in nearly two decades.

It is also true that the British referendum to leave the EU (Brexit), the election of Donald Trump to the presidency of the US, and the perceived crisis in Western democracy have been used by the Chinese governmental media to highlight the perceived shortcomings of Western democracy. The US election campaign was described as “circus-like”, a “chaotic political farce”, and a “train wreck”. Countries like North Korea and China also have very active state-sponsored nationalist campaigns. And anyone who has watched Chinese national television would be horrified by the never-ending anti-Japanese propaganda television dramas and movies which are bizarre, vulgar and kitsch.

Most Western governments and business now widely accept and tolerate China’s one-party rule and all the human rights abuses that go with it. The attraction of China’s big market and growing political power mean that most criticism of China is very softly done. Some companies are even willing to adapt their products to meet China’s non-democratic concerns. Reports that Facebook has worked on special software so it could potentially accommodate censorship demands in China are particularly disturbing. There was a time when most political scientists believed that China’s growing integration into the world economy would foster a convergence of social and political culture with the West. If anything, the reverse has happened whereby Western dependence on Chinese markets and political cooperation for issues like climate change has eased external pressure on China’s one-party system.

All things considered, democracy does not seem to have a bright future in Asia.