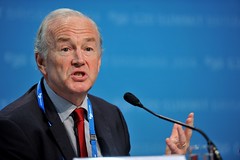 The 20th anniversary of Korean OECD membership will be overshadowed by labour rights and freedom of assembly violations, argue TUAC.
A series of events will be held at the OECD over this week to mark the 20th anniversary of the Republic of Korea joining the organisation. As of March 2016, 74 trade unionists including the President of the Korean Confederation of Trade Unions (KCTU) are imprisoned. 504 other KCTU members have been charged with “obstruction of traffic” in relation to a demonstration held last year.

Korea joined the OECD in 1996 upon the commitment to reform its labour law to bring in line with the standards of the International Labour Organisations (ILO). Yet, basic labour rights, including the right to organise and to bargain collectively are not observed in today’s Korea. State interference in trade union activities remains the norm. Korea is in fact been subject to the longest running case of labour right violation at the ILO (submitted in 1995).

“Regrettably, twenty years after its accession, Korea is still far from having built a system of industrial relations based on ILO standards that can manage conflict, reduce inequality and ensure social progress. In the past three years, repression against unions and the criminalisation of their activities appear to have returned,” said John Evans, General Secretary of the Trade Union Advisory Committee to the OECD (TUAC).

A Resolution adopted by the 136th Plenary of the TUAC to the OECD on 30 May 2016 is calling on the Korean government to respect trade union rights and the OECD to develop a “road map” in cooperation with the ILO to ensure that Korea lives up to past commitments on labour rights.

The TUAC Resolution therefore calls upon:

The Republic of Korea to:

-- release and drop all charges against Han Sang-guyen, President of the KCTU, and other KCTU officers in the fulfilment of their trade union duties;

-- engage in transparent and democratic dialogue with all components of the Korean civil society, including trade unions;

-- uphold labour rights and freedom of assembly and initiate a reform process to effectively align its labour law with internationally recognised labour standards, including ratification of ILO conventions 87 and 98 and dropping reservation to art. 22 of the International Covenant on Civil and Political Rights; and

-- devise a roadmap for a sustainable and inclusive Korea in the context of the 20th anniversary of its OECD membership, including the effective observance of labour and human rights, and to that end, work in close cooperation with other international organisations, including the ILO;

-- ensure that all member and candidate countries adhere to and observe the fundamental values of the Organisation, including pluralistic democracy and respect of human rights.

- Upholding Labour Rights in Korea in an OECD context. Issues paper prepared by the TUAC Secretariat.