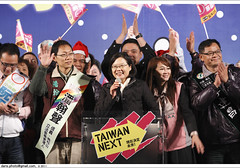 China’s communist government has always had a deep allergy to the DPP. It regards Taiwan as a renegade province which must be reunified with the mainland under the banner of its "one-China policy".

Beijing has long threatened military intervention should Taiwan seek to declare independence. It has also applied great pressure on the international community to accept its one-China policy.

This means that Taiwan has formal diplomatic relations with very few countries (22 small, poor countries at last count), and is shut out of most international organisations and free trade agreements.

Between 2008 and 2016, a history of testy relations between Beijing and Taipei gave way to a “golden age” under the presidency of Ma Ying-jeou of the Kuomintang (KMT) party.

Many official agreements were signed. Trade and investment boomed, as did the number of Chinese tourists visiting Taiwan.

A key to this golden age was Taiwan’s acceptance of the “1992 Consensus” by which both sides commit to the principle of one China, even if they may interpret that principle differently.

The victory of Tsai Ing-wen was a defiance of Beijing’s playbook. Taiwan’s citizens should have appreciated the benefits of closer economic and person-to-person linkages under the KMT.

But in reality, Taiwan’s citizens, especially its youth, were frustrated with the country’s weak economy, poor job prospects, and rising inequality under the KMT, and were also very wary about China’s undue influence on Taiwan.

The vast majority of Taiwanese citizens now feel a greater attachment to their distinct Taiwanese identity rather than to a Chinese identity.

Ironically, the increase in person-to-person contacts between China and Taiwan seems to have emphasized their differences for the Taiwanese.

Through the presidential election campaign and subsequently, Tsai Ing-wen has refused to adhere to the 1992 Consensus and say that Taiwan and China are part of one country.

Neither independence nor reunification

Rather, she has tried to dance a fine line between the pro-independence elements from her party, and the incessant demands from Beijing that she commit to the one-China policy.

Her usual formulation is that she supports the “status quo”, meaning neither independence nor reunification, a position which is supported by the majority of Taiwanese people.

But this is not good enough for Beijing which does not trust Tsai Ing-wen and the DPP. Beijing continues trying to bully her into formally accepting the 1992 Consensus on one-China.

Indeed, the long period between the elections and Tsai Ing-wen’s inauguration has provided Beijing with plenty of opportunities to tighten the screws on Taiwan.

President Xi Jinping and other Chinese leaders have been employing “megaphone diplomacy” through various speeches telling Tsai Ing-wen what she must do.

China also succeeded in pressuring Kenya and Malaysia to repatriate to China, not back to their home territory, a number of Taiwanese citizens accused of defrauding Chinese citizens.

Invitations for Taiwan to attend recent World Health Organisation and OECD meetings have reportedly been withheld due to political interference by China.

A continuation of such trends could inflict great pain on Taiwan. It would greatly undermine the government of Tsai Ing-wen, which is clearly Beijing’s intention.

But it may also stiffen the backbone of Taiwanese citizens, especially its youth, some of whom occupied the national parliament ("the sunflower movement") for three weeks in 2014 to block the approval of a services free trade agreement with China.

Playing hardball is certainly no way to win the hearts and minds of the people of Taiwan.

It was against this background that the world was waiting with bated breath for President Tsai Ing-wen’s inauguration speech on Friday 20 May -- and then to see what China does next.

Here are some of the key points:

-- President Tsai said that she respects the “historical fact” of the “1992 talks”. But she did not refer to the “1992 consensus” nor the one-China policy. She also emphasized the importance of the Constitution of the “Republic of China” (Taiwan).

-- She said that “the two governing parties across the Strait must set aside the baggage of history, and engage in positive dialogue, for the benefit of the people on both sides”.

-- She also announced a “New Southbound Policy” to “bid farewell to our past overreliance on a single market”, by expanding relationships with ASEAN and India.

In its reaction, the Chinese government said that Tsai’s speech was “an incomplete test answer” because “she was ambiguous about the fundamental issue, the nature of cross-Straits relations … She did not explicitly recognize the 1992 Consensus and its core implications.” The Chinese reaction concluded that “Only affirmation of the political foundation that embodies the one China principle can ensure continued and institutionalized exchanges between the two sides of the Taiwan Straits”.

The only subsequent Chinese reaction has been the pathetic attempt to criticize President Tsai Ing-wen by Xinhua, a Chinese state media outlet. According to this report, "As a single female politician, she has no emotional encumbrances of love, no family restraint, no children to worry about. Her political style and tactics are often emotional, personalized, and extreme".

"She doesn't care so much about the direction of political strategies, being more concerned with details. She proposes extreme short-term goals, and does not consider long-term goals." Following public protests in China, this article was removed from the Internet.

Where do we stand now?

As Richard C. Bush of the Brookings Institution has said, Tsai’s inauguration “could have been worse”. The situation in cross-Strait relations remains delicate, and a process of trust-building will be necessary.

And while accidents could always happen, there is reason to hope that good sense will apply. But in President Xi Jinping’s China, this is far from guaranteed. Stubborn domination through hard power is China’s playbook today.