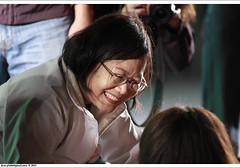 Looming Trouble in the Taiwan Straits

Trouble looms in the Taiwan Strait with the expected victory of a candidate from the pro-independence party in the upcoming Taiwanese presidential elections, writes John West.
The expected victory of Tsai Ing-wen in Taiwan’s upcoming presidential elections threatens to destabilize relations across the Taiwan Straits, and the Asia-Pacific more broadly. Tsai represents the Democratic Progressive Party (DPP), a pro-independence party.

China regards Taiwan as a renegade province of descendants of the Kuomintang (KMT) government, which lost the Chinese Civil War against Mao's Communist Party in 1949. Reunifying Mainland China and Taiwan under the banner of China’s "one-China policy" is fundamental for China’s national sovereignty.

There have been many ups and downs in the China-Taiwan relationship over the past six and a half decades. This period has also seen Taiwan become an advanced market economy and a vibrant democracy.

The return of the KMT to the presidency in 2008 under Ma Ying-jeou ushered in a period of great rapprochement between Taiwan and China. Official contacts with Beijing, which had been on hold since 1999, were revived. A free trade agreement between China and Taiwan was signed in 2010. Tourists from Mainland China were permitted to visit Taiwan starting in 2008, with more than 10 million Chinese tourists traveling to Taiwan since that time. Overall, more than 20 economic, academic, and cultural agreements have been signed between Taipei and Beijing under Ma’s watch.

Underpinning this rapprochement has been the “1992 Consensus” by which both sides commit to the principle of “One China,” even if they may interpret that principle differently.

To the great dismay of Beijing, this period of closer economic linkages has seen the two sides drifting apart politically. There has been widespread popular discontent in Taiwan, especially among youth, as the public has been experiencing rising inequality, high cost of living, and declining opportunity. There is a widespread perception that while the Taiwanese business sector has benefited from closer linkages with China, ordinary citizens have suffered, as business has increasingly moved production facilities, and hence jobs, from Taiwan to the lower-cost mainland.

Ma himself is deeply unpopular. There are public concerns about the growing dependence of Taiwan on China, as Ma has been “selling out” Taiwan to the mainland. These feelings came to a head in 2014, when students and activists ("the sunflower movement") occupied the national parliament for three weeks to block the approval of a free trade agreement, and again when students protested against China-friendly changes to curriculum guidelines in Taiwanese schools.

These developments are taking place in a context where the vast majority of Taiwanese citizens now feel a greater attachment to their distinct Taiwanese identity rather than to a Chinese identity. Generational change is fundamentally transforming Taiwan’s society and politics, and a majority of its citizens have no interest in unification with China.

It is therefore not surprising that the KMT is virtually certain to lose the upcoming presidential and legislative elections on January 16th. The DPP presidential candidate, Tsai Ing-wen, is slated to become the first woman head of state or government in Greater China.

The return of the DPP to the leadership of Taiwan is a troubling prospect for China. In increasingly nationalist China, national sovereignty is perhaps the hottest issue. And nothing is more critical to China's sovereignty than reunification with Taiwan. The growing impatience of Chinese President Xi Jinping was palpable when he recently said that the “Taiwan issue cannot be passed on from generation to generation.”

For her part, DPP presidential candidate Tsai has insisted that her cross-strait policy is the maintenance of the “status quo.” She also said that “cross-strait stability” should become the driving force for peace in the Asia-Pacific region. However, she will not commit to the 1992 consensus, although she recently said that “the 1992 consensus is an option, but it’s not the only one.”

We can only hope that reports of Tsai’s private, informal channels of communication with Beijing are true. This could go a long way towards building the necessary trust between both sides.

Management of cross-Strait relations over the coming months and years will require cool heads and a willingness to compromise on all sides. The rise of a vibrant and youthful civil society in Taiwan is a big complication for China.

This means that China needs to emphasize “soft power,” not just force, in its relations with Taiwan to effectively influence the opinions of civil society. Unfortunately, however, under the very assertive President Xi Jinping, China is still operating in a hard power logic, with its 1600 missiles presently targeted at Taiwan.

This article was originally written by John West for the Cipher Brief.