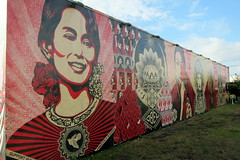 The last days of the election campaign in Myanmar are torn between hope for renewal and the need to ensure a smooth transition writes Stefano Pelaggi.
The first free Burmese elections are an essential test, the expectations generated by the worldwide extraordinary support given for a democratization process in the country, focused on the figure of Aung San Suu Kyi, will be confronted with the results of the polls.

The November 8 election are approaching and the electoral campaign in Myanmar is entering in a decisive phase, The election, which are the fairest and most inclusive consultation since 1990, have generated incredible enthusiasm and an atmosphere of euphoria in the country but also some concern; somebody is worried that in case of problems connected with the electoral process, the progress made by Myanmar thus far could be undermined. The election will be decisive for the future of the country and for the stability of the region, but probably the main requirement of all political parties is linked to a proper conduct of the consultations and to achieving the approval of the international community.

The competition seems to have become increasingly focused on the dualism between the ruling Union Solidarity and Development Party (USDP) and the main opposition party National League for Democracy (NLD). Outgoing president Thein Sein has been designated, in recent days, as the USPD's candidate in the event of election victory while Aung San Suu Kyi has publicly declared that even if she can’t be presidential candidate for the NLD, she will remain under the command of the party and lead the change in the country despite the constitutional inability to run for the highest office. Two public utterances that reveal projects that have been quite clear for some time, but the decision to speak openly on the matter indicates that the two leading representatives of the Burmese politics have decided to come out in the last week of campaigning.

The disappearance from the political scene of Shwe Mann, a general who has been characterized in recent years by the constant search for dialogue with the NLD, has been the big news of the election campaign. Shwe Mann is considered to be the real architect of the reform process initiated in the country in recent years, and had been named by several analysts as a possible choice for the presidency by the NLD. Such a move would have caused resentment among the rows of the main opposition party but would probably have facilitated the transition from the government of the military junta to an executive headed by Suu Kyi.

The support of the NLD's candidacy for president of Shwe Mann has never been confirmed by either party but the idea has been circulating insistently for months, without ever being contradicted by any of the interested parties. As parliament speaker Shwe Mann tried to oust president Thein Sein by his own party, publicly admitting aspiration for presidency and trying to take control of the USDP. Moves that have not gone unnoticed and that leaded to the expulsion from the party of Shwe Mann; president Thein Sein has taken steps altogether moderate, probably not to arouse the attention of foreign observers on the matter.

More than six thousand candidates will run for 93 parties on 8 November 2015, the seats available are 498 while other 166 seats, or 25 percent of the total, are automatically allocated to the military as required by the constitution. The electoral law is quite complex and is the result of the efforts made by the military junta in order to maintain control, even partial, of the political life of the country in case of radical changes in parliament. The president and the two vice-presidents, are elected by the members of the Assembly of the Union with a complex procedure.

The upper house and the lower house, respectively the House of the Representatives and the House of Nationalities, will nominate a presidential candidate each and the members of the armed forces, which the constitution reserves 25 percent of parliamentary representation, will nominate another candidate. The three candidates will then be voted on by members of the two chambers joined together and the winner will become president and the other two contenders will be appointed vice-presidents.

The USPD strategy is quite simple, the ruling party should try to get 25 percent of the votes to be able to express the presidential candidate. For this goal it has focused on the military and representatives in the parliament, focusing on individual candidates, their presence on the territory and on the ability to mobilize the electorate. The ruling party can not rely on the militant activism of the NLD supporters, and the links with the territory of each candidates will be essential to victory.

While the NLD aims to win more than two-thirds of the seats available, with such an outcome from the polls Suu Kyi may decide in an autonomous and independent way the next president of Myanmar. Otherwise the weight of ethnic parties will be decisive and even a victory of the NLD would be useless. An overwhelming success of NLD in the big cities is granted, while in rural areas and in the areas with a prevalence of ethnic groups, the situation is more complex. The ability of the USPD candidates to leverage relationships with local communities, in a dynamic often characterized by traffic of influence, will be crucial for a party that can not rely on an brand image so powerful as the one built by the NLD in recent years.

It will take two to three weeks to get to the proclamation of the final results, while doubts on possible electoral fraud does not seem so urgent. The judgment of international observers on the fairness of the elections is a priority for all political actors, aid and loans from abroad are essential to maintain the process of economic development in Myanmar and they are closely associated with the recognition of the free exercise of voting.

There are some serious issue which any president will face in the future, the constitution of 2008 designed by the old military junta and passed in the immediate aftermath of the cyclone Nargis and the inability to change the Constitution itself without the support of the military will be among the main obstacles.

The only certainty is that the delicate process of transition to a democratic Myanmar can not be reversed or stopped, the incredible transformation and economic development of the country is directly linked to a democratization of the political representation. At the same time the transition will not be clear or fast, the presence of people linked to the military junta in the administrative structure after more than fifty years of government is a matter with which the next government will necessarily have to do deal with.

The lack of experience in administrative matters of the majority of the NLD cadres is another item to consider, together with the high expectations that the figure of Suu Kyi has been able generate in these decades of strong and determined opposition to the Burmese government.