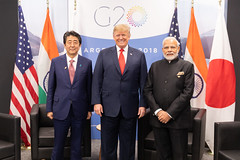 Migration from India to Japan has been growing strongly in recent decades. It provides a case study of how a traditionally-closed society, Japan, opens up to the outside world.
Japan needs migrants in light of its labour shortages. As its population ages, its working-age population (15-64 years old) has been declining since the mid-1990s. Looking ahead, its total population could decline from 126 million in 2020 to 75 million in 2100, according to the United Nations, while its working-age population could fall from 59 to 51 percent of the total population.

Another reason why Japan needs migrants is that its education system is not developing the skills that its economy needs. True, 15-year-old Japanese students scored particularly well for science, mathematics and, to a lesser extent, reading in the OECD’s Programme for International Student Assessment (PISA). But the OECD also reports that students' digital skills are weak because of insufficient focus on new technology in school curricula, and that relatively few students study STEM disciplines, particularly women.

While the number of foreign residents of India is still relatively modest at around 40,000 in 2020, this number has leapt from 3,000 in 1990, as Indian migration has grown more generally to advanced economies. In her recent book, “Indian Migrants in Tokyo: A Study of Socio-Cultural, Religious, and Working Worlds”, Megha Wadhwa provides a fascinating portrait of the lives of these migrants, with the attendant array of positive and challenging experiences.

Wadhwa, a postdoctoral fellow at Tokyo’s Sophia University, based her research on some one hundred interviews of Indians living in Japan, and her own experience of living in Tokyo for the past 14 years. She expresses gratitude to the late Chandru G. Advani (1924–2018), who was the oldest Indian migrant in Japan and the one who had lived there the longest. Wadhwa’s many vignettes of Indian life in Japan convey the richness of the migrant experience, the history of relations between India and Japan, and how insular Japan is coping with its ageing population in a globalised world.

The India/Japan relationship goes a long way back with Buddhism being perhaps the first link, even though it entered Japan via Korea, writes Wadhwa. But the modern history started in the second half of the 19th century when Indian businessmen traveled to Yokohama and Kobe to import Japanese silk. Thus the early Indian settlers in Japan were typically traders, merchants or workers.

Then the 1990s saw a new wave of Indian migration to Japan of professionals in fields like IT, consulting or marketing. Some were working with Japanese people or Japanese multinational companies, others working with international setups in Japan, or employed by Indian multinational companies in Japan. This set up a culture clash according to Wadhwa, as Japanese businesses can take six months to make decisions, but only one month to execute, whereas for Indian businesses, the timing is often the reverse. Punctuality is another important point of difference!

This new wave of Indian migrants was underpinned in the year 2000 by the two governments signing the India–Japan Global Partnership in the 21st Century declaration, as one of the remedies for Japan to overcome its shortage of IT engineers, writes Wadhwa. Not surprisingly, Indian migration to Japan is dominated by males, who make up some 70 percent of total migrants.

In the Japanese mind, India is no longer a country only linked to curry and Buddhism. It is now associated with IT and mathematics. Despite these positive changes, most Indian migrants feel that the Japanese have a more positive view of Caucasians than of Indians or other Asians. Indeed, Wadhwa argues that analysts of the social psychology of the Japanese suggest that their inferiority complex towards the Caucasian West and the superiority complex towards Asian neighbors has played a major role in the Japanese perception of other nationalities.

Wadhwa recounts the case of an Indian lady who moved from Japan to Hong Kong, which she preferred because of its more open, multicultural environment. Institutional rigidity and the palpable pressure to assimilate into Japanese culture and society are some of the factors that discourage Indians from settling in Japan.

Like migrants in most countries, Indians have formed community associations, be they related to business, education, religion or language. Their lives as migrants revolve around creating a ‘little India’ for themselves in a foreign land, according to Wadhwa. When they fear losing their Indian identity, they make greater efforts to hold on to it tightly, they create a home away from home.

Thus, the Oriental Club, established in 1904 in Kobe, was one of the earliest Indian community organisations. In 1913 it changed its name to The India Club, and it continues to operate under that name to the present day. Several more associations were founded in the 1930s, including the Indian-dominated Silk Merchants’ Association, the Indian Social Society and the Indian Chamber of Commerce. A century later, there were around 42 associations as of December 2019. As Indian migrants mix together in Japan, old notions of caste and regional identities in India’s highly stratified society do not play a very important role, according to Wadhwa.

Indian schools in Japan have gained in popularity, not only among Indians but also among Japanese and people of other nationalities. Students join these Indian schools not only with the purpose of studying in English, but also for the emphasis on maths and computer skills. Another factor is the perception that Japanese schools are inculcating children in collectivism that suppresses individual creativity.

We also meet Yogendra Puranik, commonly known as Yogi, the first person of Indian origin to win an election in Japan, to the City Council of Edogawa Ward in Tokyo. But as Yogi says, if Japan does not become more accepting of other cultures – and fast – the nation could find it difficult to attract top talent, and also lose its most global-minded citizens to its competitors. Other aspects of Japan’s work culture adversely affect its attractiveness to skilled workers, notably long working hours, seniority-based pay and male-dominated work culture.

Megha Wadhwa’s book tells a very important story, of the lives of Indian migrants and workers in Japan. It highlights their efforts and challenges in integrating into this wonderful country. But part of its message is that Japanese citizens should also make greater efforts themselves to facilitate this integration. The Japanese economy needs these migrants for it to remain a global economic power. But this means Japan becoming more flexible and open to understanding other cultures.

As Wadha writes, “The lack of English skills among Japanese, and also the prevalence of sakoku (isolation) and Nihonjinron sentiments (the theory of the uniqueness of Japanese people) are some of the elements that generate popular anti-migrant feelings”. Moreover, while the Japanese government courts India as a partner in its political rivalry with China, to have stronger foundations, this partnership needs to be underpinned by strong people-to-people relations.

This article was first published by the Kootneeti on 14 January 2022.