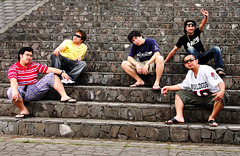 Japan's immigration phobia is costing the country dearly, argues John West.
Japan has always been culturally averse to immigration due to the notions of cultural uniqueness and homogeneity that pervade Japanese thinking. This is ironical in many ways.

For example, following the Meiji Restoration of 1868, large numbers of Japanese emigrated to Hawaii, California, Latin America and elsewhere in the Pacific area. Even today, some Japanese retirees are migrating to countries like the Philippines and Thailand. And Japan does have ethnic minorities like the Ainu, the Ryukyuan, and the Burakumin.

The issue of immigration to Japan has become a topic of lively debate over the past couple of decades, especially since Japan's working age population began declining in 1995. This is the result of a long period of fertility below the replacement rate of 2.1 children per woman.

Japan’s foreign population has indeed increased from about 1% of total in 1990 to 2% today. These migrants come mainly from China, Korea and more recently South East Asia.

Japan also has about 140,000 international university students (60% come from China) who can work 28 hours a week. Marriage migration has become an important source of migrants. And some women, especially from the Philippines, also migrate through "entertainer visas". The strong demand for foreign workers means that Japan has a significant number of illegal migrants who are overstaying their visas.

Economic partnership agreements with Indonesia and the Philippines have provisions for the acceptance of registered nurses and nursing care workers. But their Japanese language requirements are so strict that very few people have been able to avail themselves of this immigration avenue.

Nevertheless, Japan has the lowest foreign population, as a share of total, of all the advanced OECD countries, except for Mexico. Its immigration policies remain highly restrictive for lower skilled migration. And while Japan is very welcoming to highly skilled migration, the country has had difficulty attracting such migrants, as they tend to be more attracted to Asia’s more international cities of Hong Kong and Singapore. Japan ranked a mere 48th out of 60 countries in its “attractiveness to foreign-born highly skilled professionals” in a survey by Switzerland’s International Institute for Management Development.

With the continued decline in Japan's working age population, the country is now beset with labor shortages which are adversely affecting economic growth, and are inhibiting the effectiveness of monetary and fiscal stimulus policies, as the International Monetary Fund has argued. According to a study by Daiwa Institute of Research, there would be labor shortages in the 340,000-660,000 range during 2015-16, which are cutting GDP by some 2%.

A survey by the Manpower Group, points to 81% of Japanese firms having difficulties in filling jobs in 2014. This is the highest of all the countries surveyed, with Japan’s labour shortages increasing significantly over the past decade. Japan’s labour shortages are most pronounced in areas like construction, health care, home service and long-term care, and restaurants. This is challenging for the reconstruction following the 2011 triple disaster, and also for the preparation for the 2020 Olympic Games.

The corporate sector and some commentators have been arguing for greater openness to immigration, and the government’s “Abenomics” programme does includes a policy to increase the utilisation of foreign workers. The government has implemented some measures for highly skilled foreign professionals and to lengthen the stay of “internship” migrants from three to five years. But these responses remain very modest.

Looking ahead, there is little end in sight to Japan’s labour shortage problems. Under one scenario, the Japanese government is projecting the labour force to shrink from 66.3 million in 2010 to 56.8 million in 2030, with economic growth remaining near zero.

The Japanese government needs to abandon its ad hoc, reactive approach to immigration and elaborate a comprehensive immigration policy which should be an integral part of the country’s medium term growth strategy. Immigration is often an important complement to other policy issues.

For example, “womenomics”, enhancing women’s participation and advancement in the economy, is a key and potentially powerful element of the Abenomics programme. Indeed, the OECD has estimated that if the female labor participation rate were to converge to those of men by 2030, this could lift GDP by almost 20%.

However, reaping these potential benefits is greatly constrained by restrictions on immigration of home service and care workers that make it difficult for Japanese women to combine work and family life. The massive cost of Japan’s ageing population is also exacerbated by the lack of care workers, due to immigration restrictions.

Entrepreneurship and innovation are two other areas where Japan performance has been relatively weak, and where immigration can contribute. According to the Global Entrepreneurship Monitor, Japan's entrepreneurial activity has been very low since GEM started collecting data in 1999, and in 2014 was the second lowest of the more than 100 countries surveyed (coming just before Surinam). And as the OECD laments, "Low rates of firm creation and exit reflect a lack of economic dynamism in the business sector". As many studies have shown, well-managed immigration can be a powerful source of entrepreneurship and innovation. Where would Silicon Valley be without its immigrants?

Prime Minister Shinzo Abe’s ambitious target of doubling the level of direct investment in Japan from the woefully low 4% of GDP could also be facilitated by greater openness to immigration. Many immigrants bring a stock of assets to invest, and can be useful workers for international companies requiring bilingual staff. The stock of foreign direct investment in Japan is very much lower than for the US (19%) or for Germany (29%). Even North Korea’s stock of inward FDI, which represents 12% of GDP, is much higher than Japan’s.

Japan’s ageing and declining population is having profound impacts on the country’s agricultural and regional economies. With the average age of Japanese farmers being 68, and Japanese youth having little interest in the agricultural sector, immigration could be a saviour for the sector. Immigrants could also help revive many of Japan’s rural regions which are now dying and deserted from population decline.

Like affluent youth all over the world, young Japanese have no liking for “3D” jobs (the dirty, difficult and dangerous). Migrants are the only people willing to do such jobs.

At a time when Japan is seeking to court more diplomatic friends in the Asian region, in the context of geopolitical rivalries, one important friendship gesture would be greater openness to immigration. It should also entail reforming the bogus internship programme, which is a disguised scheme for cheap labour, and is subject to widespread abuses like forced labour and confinement.

Japan could also enhance its position as a responsible stakeholder in the international community by reforming its closed-door refugee policy. Few nations are as financially generous as Japan in financing international relief efforts for persons displaced by war, civil strife, and natural disasters. Japan is the fourth-largest donor to the UN High Commission for Refugees, with a grant of $182 million in 2014.

Conversely, few nations are as miserly as Japan in providing physical asylum to refugees. In 2014, the Immigration Bureau only approved 11 of the 5000 applications (0.2% of total) for refugee status. In sharp contrast, the US granted refugee status to 30% of cases in 2013, Germany to 22% in 2014, and the UK to 37% in 2014. As UN High Commissioner for Refugees said “ The numbers [of acceptance] are quite low. I think that there is a reasonable presumption that the system is too rigid and too restrictive.”

The Japanese government could also integrate into its development cooperation policies education and training programmes in countries likely to supply future migrants. These programmes could teach Japanese language, laws, customs and culture, and provide the basis for obtaining a ‘green card’. The government could seek to court some of the 600,000 people worldwide who take the Japanese Language Proficiency Test each year.

Is it realistic to think of Japan opening up to immigration as a new potential source of economic growth?

After all, Prime Minister Shinzo Abe and many parts of the government remain steadfastly against having an immigration policy, citing the social problems experienced in Europe with large scale immigration. In an address to the UN, Prime Minister Shinzo Abe said “I would say that before accepting immigrants or refugees, we need to have more activities by women, elderly people and we must raise our birth rate. There are many things that we should do before accepting immigrants.”

But government ministers like Shigeru Ishiba and Taro Kono have recently spoken out in favour of increased immigration. And an Asahi Shimbun survey does show that Japanese public opinion may be changing. The majority support a more open immigration policy with the number of those willing to accept foreigners who want to permanently settle doubling over the last five years. In this new poll, 51 percent of Japanese respondents said they support Japan accepting foreigners who want to settle, while 34 percent were opposed to expanding immigration.

For Japan, revitalising its economy is imperative. Already, Japan’s potential GDP growth rate has fallen from over 3% in the early 1990s to only ½% today, according to the Bank of Japan. The population is slated to fall from its current 127 million to 87 million in 2060, when 40% of the population would be 65 or older.

Without more serious efforts, there is a risk of Japan simply withering away under the weight of poor demographics and the burden of massive public debt, and increasing its vulnerability to the growing fragility of its regional security environment. A well-designed immigration strategy could play an important role in revitalizing the economy and also society.