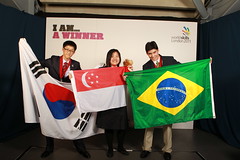 In many ways, August is an important month in the histories of both Singapore and South Korea. On the morning of Aug 9, 1965, the Malaysian Parliament unanimously voted for a constitutional amendment expelling Singapore from Malaysia. Hours later, the Singapore Parliament passed the Independence Act proclaiming the island to be an independent and sovereign republic.

In many ways, both Singapore and South Korea have similar development histories from the early 1960s. When Singapore became independent in 1965, it was a colonial backwater, and South Korea was then a developing country by most economic and social indicators. Over the past 50 years, both have become regional economic powerhouses, and—along with Hong Kong and Taiwan—have justifiably been called the four Asian tigers because of their belief in free market philosophies and highly developed economies. Not surprisingly, over the past four decades, both countries went through many ups and downs, including the Asian financial crisis and the severe acute respiratory syndrome (Sars) threat.

In terms of economic development, the records of both countries have been stellar and enviable. However, they differ markedly in some ways. Probably the most striking is the approach to population policies. In 2014, South Korea had 50.4 million people, which is nearly double of what it was in 1960. However, with a fertility rate of 1.2 children per woman, one of the lowest in the world, Statistics Korea forecasts that its population will start to decline within a decade and is likely to plummet to somewhere between 34 and 44 million by 2060. The extent of this continuing steady decline can be best illustrated by the fact that in 1980 there were 5.7 million children in elementary schools. Today, there are only about three million.

South Korea faces huge social, economic and political problems in the future because of an increasingly older and shrinking population, and steadily rising eldercare costs. By 2060, South Korea will have half of its population over 60. Countries like South Korea and Japan, with very strict immigration control policies, have a looming demographic problem during the post-2060 period.

All developed countries are witnessing population declines which they are compensating with immigration policies. Singapore is one of them. In 1970, Singapore had nearly 1.9 million citizens and 138,800 permanent residents. By 2014, the number of Singapore citizens had increased to 3.34 million and permanent residents to 528,000. Many permanent residents have become citizens during the intervening period. Aside from demographic issues, the two countries have many similar features, and have benefited immensely by cooperation, collaboration and competition with each other. Both were colonised, but once the colonial yokes were removed, through good governance, hard work, liberal economic models and a consistent "can do" attitude, they have become economic powerhouses within two generations. This provided an excellent and continuing better standard of living to their people.

But the development models of the two countries are different. Singapore had no natural resources and thus had to focus on the services industry in finance, logistics, brokerages, port and air transportation and high tech research and development in logical and smart ways. South Korea started with labour-intensive industry and infrastructure, rural development and then graduated to high-end manufacturing.

All the four Asian tigers have learnt from each other. They progressively became leading exporters of goods and services as well as major importers and exporters of knowledge and services. All these developments and successes were underpinned by high quality education, steadily improving management and administrative skills, and development and adoption of new technologies. These activities in turn were supported by eminently responsible and productive political leaderships, administrative and relentless pursuit of economic growth and sustainable development, and a perpetual quest for excellence. The net result for both countries has been true success stories of self-resilience, and creation of consistent growth opportunities.

These have culminated into Singapore becoming a world leader in a smart knowledge-based economy, and one of the wealthiest countries of the world. South Korea, on the other hand has transformed itself from a poor, war-torn economy to a key manufacturer of high tech goods such as semi-conductors, electronics, cars, ship building, petrochemicals, engineering and construction.

On this 40th anniversary of establishment of Singapore-South Korea diplomatic relationships, the high-level seminar at NTU will be addressed by leading South Korean and Singaporean policymakers and academics. Among the speakers will be ambassador Kim Young Mok, a visionary and doer who, as president of the Korean International Cooperation Agency (KOICA), has put it firmly on the world development map.

The partnership of Singapore and South Korea reinforces Mr Kim's views that "Korea and Singapore have common interests in helping regional integration through the framework of the Asean Economic Community and actively help the developing countries of the region to achieve long-term prosperity and sustainable development". There is no question that reducing imbalances and inequalities among the nations and within the individual countries of the region would be an important contribution of the two countries.

Asit K. Biswas is Distinguished Visiting Professor at the Lee Kuan Yew School of Public Policy. He will be giving the keynote lecture at the 40th anniversary celebrations of Singapore-South Korea diplomatic ties.

This article was first published by The Business Times on September 3, 2015