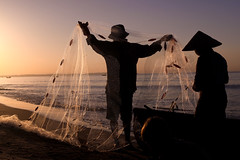 We need a South China Sea environmental summit, argues James Borton.
The South China Sea remains at the epicenter of one of the most volatile maritime areas in the world with little or no agreement on sovereignty claims to ownership of atolls, submerged banks, islands, reefs and rocks. Yet South China Sea fishermen, marine biologists and policy shapers agree that without an end to unsustainable fishing practices, and urgent adoption of environmental protection measures, a catastrophic marine biodiversity and fishery collapse is imminent.

Beijing’s accelerated land reclamation over these specks of rock in the roiling sea in recent years has only escalated the friction among claimants. In particular, China’s expansion in Johnson and Gaven reefs—also claimed at least in part by Taiwan, the Philippines, Brunei and Vietnam –threatens to wreck rich fishing grounds and valuable coral reefs in the archipelago.

The daily dumping of landfill with sand dug from nearby reefs by Chinese laborers, “upsets the marine ecology of the region, completely destroying the formed coral reefs aging hundreds of millions years. At the same time these actions destroy the habitat of many marine species. Protecting the marine ecological environment is a global issue and citizens all over the world are responsible for that,” claims Dr. Le Van Cuong, former director of the Institute for Strategy and Science and a recognized expert on the SCS.

The adoption of the 1982 UN Law of the Sea Convention (UNCLOS) legitimized the value of these atolls, islands and shoals. The law established a 200-mile EEZs (economic exclusion zones) allowing the coastal states the right to exploit the resources out to 200 miles of their shorelines.

This unprecedented attack on the wondrous marine environment because of overfishing and reclamation is leading to a dramatic decline in biodiversity. Since the 1960s, the number of fish species in the South China Sea has markedly declined from 487 to 238. Excessive and unsustainable fishing practices, as well as land-based pollution, coral reef damage and other factors, have exacerbated the depletion of fisheries. It’s no surprise that policy experts are concerned about the implications of escalating tensions.

Center for Strategic and International Studies (CSIS) senior fellow, Gregory Poling believes “anxiety and the expanded patrol and surveillance capacity that Beijing is constructing with facilities, docks, and probably at least one airstrip in the Spratly Islands will complicate the disputes in the South China Sea.” Satellite images confirm the Middle Kingdom’s illegitimate territorial expansions, raising fresh concerns in U.S. and Asia.

Last year the international media was drawn to the standoff between China’s $1 billion forty-story oil rig parked approximately 120 miles from Vietnam’s coast near islands claimed by both countries. This test of geo-political limits resulted in China removing its rig but not its resolve.

China’s Foreign Minister, Wang Yi’s claims, “we are in this boat together with more than 190 other countries. So of course we don’t want to upset the boat, rather we want to work with other passengers to make sure this boat will sail forward steadily and in the right direction.” This diplomatic metaphor does nothing to diminish the Middle Kingdom’s worsening coastal fishing crisis that propels their streamlined steel trawlers into deeper contested waters. In response, Vietnam’s fishermen have been granted generous soft loans to replace their traditional wooden boats with steel hulls. Hanoi recently trumpeted that the country will have 30,000 new trawlers plying the East Sea and beyond by 2020.

Whether there is a repeat appearance of the oil rig HYSY 981 or redeployment of the Hainan Baosha 001, a 32,000 ton fish factory vessel with its four processing plants with 14 production lines and 600 workers, it “raises legitimate questions about the basis of China’s claim to fish in the East Sea,” says, Youna Lyons, a senior research fellow at National University of Singapore. Exhaustion of fish stocks belonging to Vietnam and the Philippines; are a direct violation of the 1982 United Nations Convention on the Law of the Sea (UNCLOS).

Marine science and geo-politics are converging more than ever in the South China Sea. Nina Hachigian, U.S. Ambassador to the Association of Southeast Asian Nations in a recent article in The Diplomat reinforced the ecological drama unfolding on the SCS. “Yet, this marine bounty, and by extension, the food security of the people of the region, is under attack. Illegal, unreported, and unregulated (IUU) fishing in the area is widespread. Common methods such as dynamite fishing, cyanide poisoning, and bottom trawling have wreaked havoc in regional ecosystems and threaten the future of the regional fishing market. Forth percent of the South China Sea’s fish stocks have already disappeared and 70 percent of the South China Sea’s coral reefs are rated to be in fair or poor condition.”

The food security or renewable fish resource challenges are clear. According to a World Bank Fisheries Outlook, “Fish to 2030: Prospects for Fisheries and Aquaculture,” China will increasingly influence global fish markets. A baseline model projects that China will account for 38 percent of global fish consumption by 2030. The United Nations Environmental Program (UNEP) confirms that the SCS accounts for as much as one tenth of global fish catches. A clear trend is emerging: overfishing and destruction of coral reefs are steadily increasing.

Bill Hayton’s The South China Sea The Struggle for Power in Asia asserts that overfishing remains one of the major issues that must be addressed in the region since China encourages its fishermen to trawl through contested waters. “During the 2012 (fishing) ban, the Hainan Province Department of Ocean and Fisheries organized the largest-ever Chinese fishing fleet to reach the (Spratly) islands: 30 vessels including a 3,000 ton supply ship.”

“In some cases, it might be easier to set-up informal international activities by sponsoring participation in scientific and conservation research by nongovernmental organizations (NGOs) that can affect protection with seasonal and zonal restrictions,” claims John McManus, biologist and director of the National Center for Coral Reef Research (NCORE).

There are recent historical markers for such cooperative scientific research efforts. For example, the intergovernmental, multinational Coral Triangle Initiative (2009) encompasses Indonesia, the Philippine, Timor Leste, Papua New Guinea, and the Solomon Islands. In this area hosting more than 600 species of coral, 3,000 fish species, and the world’s largest mangroves, this initiative enables regular marine science dialogue and effective political cooperation despite its non-legal aspect.

Last year’s Global Oceans Action Summit for Food Security and Blue Growth held in The Hague, brought together, global leaders, ocean practitioners, scientists, NGOs and international agencies, like the World Bank, the Food and Agriculture Organization of the United Nations and others. They acknowledged that 3 billion people currently depend on fish for twenty percent of their average per capita intake of animal protein. Also, between 660-820 million livelihoods or almost 12 percent of the world’s population are dependent on fisheries.

The challenges are hard to ignore: how to feed over 9 billion people by 2050, in the face of climate change, increased competition for marine resources, overfishing, habitat change and coastal pollution. The solutions warrant faster solutions.

Why not call for a South China Sea environmental summit; a collaborative strategy established by a joint SCS Marine Blue Commission made up of marine scientists and policy shapers to address trans boundary issues, to create regional fishery bodies, to promote designated marine reserves, especially in the Spratlys, and to encourage citizens to petition their governments to adopt the necessary marine conservation practices now before it is too late.

Put simply, perhaps this message from John Gruver of the United Catcher Boats Association is what the South China Sea fishermen need to practice. “The fisherman of the future isn’t going to be measured by the fish he does catch, but by the fish he doesn’t catch.”

James Borton, a recipient of a National Endowment for the Humanities Fellowship at Yale University, is a freelance global journalist. He writes for Asia Times, Asia Literary Review, Foreign Policy and The Washington Times. He recently edited, The South China Sea: Challenges and Promises.

This article was originally published by the International Policy Digest on April 11, 2015.