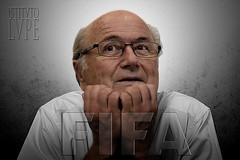 What Fifa tells us about the world order

OMFIF's David Marsh has shared with us his thoughts on what Fifa tells us about the world order.
Sepp Blatter’s ejection as president of world soccer’s governing body and the political spat over the China-led Asian Infrastructure Investment Bank illustrate the limits to abuse of power and patronage.

Behind the goings-on around Fifa and AIIB are 10 common messages, writes David Marsh.

1. US extra-territoriality can reach only so far. The long arm of the US law allowed Swiss police, with US judicial authority, to arrest allegedly corrupt Fifa officials in Zurich. Years of US over-extension at the IMF and the World Bank have led China to fight back by launching, with unexpected global support, its own infrastructure bank.

2. The old order is changing – and some people don’t like it. Blatter was able to cling on beyond the bounds of ludicrousness by expanding football’s frontiers to emerging market economies, the source of much of his support. The world’s centre of gravity has shifted, not always to the hitherto kingpins’ liking – as America’s distaste for the AIIB initiative displays.

3. When irresistible forces meet immovable objects, something happens. Blatter defied gravity for years, then he had to fall to earth. America’s Congress has blocked internationally agreed IMF governance reforms for nearly five years. Eventually, inevitably, this produced a counter-reaction.

4. Good governance must be international. Fifa’s massive flouting of normal rules of integrity represents a universal affront. The AIIB, when it gets going, will have to follow the highest standards of management accountability and transparency. The presence of western government shareholders, otherwise decried by the US, should help ensure that.

5. Competition is positive. The threat of fragmenting Fifa’s fiefdoms and setting up rival regional competitions appears, with many other influences, to have convinced Blatter to step down. Competition in governance, organisation and lending between the AIIB, the World Bank and Asian Development Bank, if correctly handled, will be salutary.

6. No country is an island. Switzerland is a country often given to clientelism, accustomed to playing by its own rules. The US and the rest of us have lived for many years with, and on, the Pax Americana and the Washington consensus. Globalisation is catching up with everyone, in different ways and in different spheres.

7. Speak softly and carry at least a medium-sized stick. We have heard no barnstorming American political statements about Fifa, but we have seen a chirurgically-executed US juridical strike. By contrast, America’s hapless handling of the AIIB imbroglio has given freshly confident China leeway to act as a consummate diplomatic force.

8. Swing players can count. The UK, through its outspoken Football Association chairman and its opportunistic wish to lead Europe over the AIIB, has had a major impact in both episodes. In each case, critics accuse the UK of acting partly for self-interested mercantilist purposes. In each case, the critics may be partly right.

9. An unstable equilibrium can persist for years, then topple. Blatter, apparently at the centre of an impregnable edifice, is being swept away like a leaf in the wind. US power backing the Bretton Woods institutions is undoubtedly longer-lasting, but America too must be mindful of the gradual undermining of its foundations.

10. Corruption corrodes. Blatter bowed – weakened from within, assailed by the Anglo-Saxons, chased by the courts. China has forged ahead with the AIIB at a time when the Communist regime is attacking industrial-scale corruption gnawing at state legitimacy throughout the land. Compared with some newly enriched Chinese, Blatter and his like are small fry.

David Marsh is Managing Director and Co-Founder of OMFIF, the Official Monetary and Financial Institutions Forum.