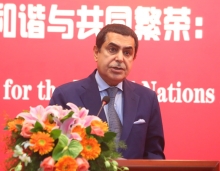 The Alliance of Civilizations was launched in 2005 by the Prime Ministers of Turkey and Spain, to be later adopted by the Secretary General of the United Nations to become a UN initiative. The context was the atmosphere of mutual distrust, fear and polarization prevalent between the Islamic world and the West.

The mission of the United Nations Alliance of Civilizations (UNAOC) is to forge collective political will and to mobilize concerted action aimed at improving cross-cultural understanding and cooperation among countries, peoples and communities. The Alliance develops its actions at both governmental and civil society levels. It also works to counter forces that fuel polarization and extremism.

The UNAOC is currently expanding its work and activities in the Asia and South Pacific region. A regional consultation was held in Shanghai in November, 2012, attended by about 150 leaders from government, academia, business, media, youth, and civil society from China and almost all countries in the region.

“We welcome the UNAOC to our region. Our only regret is that you are coming only now. The mission and the work of the Alliance are immensely important and relevant for the Asia and the South Pacific region!”

These were the words of many participants at the Shanghai event, which was opened by the Chinese Vice Minister of Foreign Affairs Mr. Cui Tiankai, the vice Mayor of Shanghai Mr. Tu Guangshao and former UNAOC High Representative President Jorge Sampaio.

Many concrete proposals emerged from Shanghai, such as:

i) Facilitate a partnership with ASEAN to adopt and promote the UNAOC’s goals.

iii) Encourage states to review text books and the way history is taught at school with respect to other cultures.

v) Design a UNAOC inter-cultural and inter-religious mechanism of dialogue to address conflict situations in the Asia Pacific region at both state and civil society levels.

As a followup to Shanghai, the UNAOC held a session at the November 2013 Beijing Forum. It was moderated by: Tu Weiming Professor and Dean, Institute for Advanced Humanistic Studies, Peking University; and Jean-Christophe Bas, Senior Advisor Strategic Development and Partnership, United Nations Alliance of Civilizations.

The distinguished panel discussed the state of relations among peoples and cultures in the Asia and South Pacific region. They also made recommendations for the work of the UN Alliance of Civilizations in the region and how it can play a positive role in fostering dialogue, understanding and collaboration among people and cultures in the region. Among the issues highlighted were the more effective use of the media, new communications technologies and the arts.

The goal was to collect concrete proposals and ideas for action that will be discussed at the occasion of the UNAOC Global Forum to be held in Indonesia in August 2014 where the objective is to develop a regional plan of action.

At the Beijing Forum session, the new UNAOC High Representative, H.E. Mr. Nassir Abdulaziz Al-Nasser, said that "building bridges of understanding in the midst of religious, cultural and linguistic diversity will benefit greatly from our work with Asian civilizations".

He added, "We are aware that parts of Asia are currently facing tensions and risk of conflict. The situation calls for serious efforts for peace and reconciliation through dialogue, the respect for human rights, freedom of religion, and cultural tolerance, while at the same time ensuring that extremism and militancy are not allowed to take root."

The UNAOC High RepresentativeI viewed "with great optimism the role of Asia and China in enhancing inter-civilizational understanding within the region and in the world at large". And he said that "China’s tradition has the potential to enable it to play a key constructive role in the region, and beyond".

We can only wish the UNAOC well for its next Global Forum, in Indonesia in August 2014. Its work is of fundamental importance for the future peace, stability and security of the world. As the High Representative said:

"The world is in the midst of an unprecedent rebalancing with the rapid rise of Asian population and economic growth. It is our duty and our responsibility to make sure that the new world that is emerging is a peaceful world and ensures the harmony of civilizations and prosperity for all."

For further information on the work of the UNAOC, please contact: Jean-Christophe Bas, Senior Advisor, Strategic Development and Partnership, United Nations Alliance of Civilizations -- This email address is being protected from spambots. You need JavaScript enabled to view it. .

- Concluding Remarks by HR Al-Nasser at the Beijing Forum