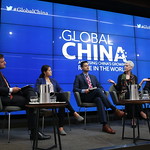 The World According to China

Following the recent 20th National Congress of the Chinese Communist Party (CCP), China will likely accelerate efforts to transform the rules-based world order in its favour.
The CCP National Congress was very closely watched by analysts and China watchers. As expected, the leadership of Xi Jinping was renewed for a third five-year term. But more than that, Xi and his “Princeling faction” appear to have achieved a clean sweep. The new Standing Committee of the Politburo contains not one member from the rival Communist Youth League faction. This means that there are no allies of the previous Chinese leadership (President Hu Jintao and Premier Wen Jiabao) nor the outgoing Chinese Premier Li Keqiang in the Standing Committee. Li was even left out of the new Central Committee. These decisions may be behind the curious treatment of former President Hu at the Congress’s closing ceremony.

As many commentators have speculated, with Xi now fully in control of China, we can expect an even harder line in China’s international relations than we saw during Xi’s first two terms. In this regard, a recent book by Elizabeth Economy, The World According to China, provides incisive analysis of China’s global ambitions, and is a companion to her previous excellent book, The Third Revolution: Xi Jinping and the New Chinese State, which focussed more on domestic economy and politics. Economy is now a Senior Advisor (for China) at the US Department of Commerce, and on leave from Stanford University’s Hoover Institution.

Economy argues that China has changed a lot over the past 40 years, and now wants the world to change along with it, in ways that align with its values and policy and normative preferences. In particular, she identifies five dimensions that Xi’s China is seeking to transform. First, Xi is working to redraw the geography of China by reclaiming what he considers to be China’s sovereign territory, including Hong Kong, the South China Sea, Taiwan, Diaoyu/Senkaku Islands, and even some borderlands with India and Bhutan. Second, Xi is trying to push the US out from its position as dominant power in Asia under the mantra that “Asia is for Asians to govern.” As Economy says, Xi really means that Asia is for China to govern!

Third, Economy has a detailed chapter on China’s Belt and Road Initiative (BRI), by which China is seeking to spread its influence and embed its interests and policy preferences in other countries. The BRI has evolved from a hard infrastructure initiative funding railways, roads, and ports to include new elements like a Digital Silk Road, a Health Silk Road, a Polar Silk Road, and China’s first overseas military logistics base in Djibouti.

Fourth, perhaps Economy’s most interesting chapter is on technology issues, where she surveys the Made in China 2025 policy and dual circulation theory (the latter meaning reducing dependence on foreign markets and expanding domestic demand and the capacity for innovation). She has a fascinating section on China’s ambitions to produce semiconductors, which have not been crowned with success. Economy dissects Xi’s complex relations with big tech companies like Alibaba, Tencent, and ByteDance (the creator of TikTok). A lot of finance and information pass through China’s tech companies, and the government wants to control and have access to this information.

Xi wants to use these tech companies for his global ambitions but does not want their celebrity CEOs to be more popular than him – there can only be one emperor in Xi’s China! The monopolistic positions of these companies also mean that there are also legitimate competition policy issues that need to be addressed. Lastly, Economy explores China’s push for a new Sino-centric world order that will be achieved by transforming global governance. China has been very active in securing leadership positions in the UN, influencing international norms, and creating new institutions like the Asian Infrastructure Investment Bank, the BRI, and the Shanghai Cooperation Organisation.

But, as she and China scholar Minxin Pei have argued in subsequent webinars, Xi’s ambitious and aggressive foreign policy has become problematic. While Xi may believe that “The East is rising and the West is declining,” he seems to have not foreseen the reputational damage he would incur from his close friendship with Vladimir Putin and China’s “wolf warrior diplomacy” against Taiwan, Hong Kong, Japan, and India. He also seems to be surprised by the pushback from the US and other Western countries, the severe sanctions on Huawei, and the difficulties of implementing and maintaining domestic support for the BRI. In sum, Xi may have overestimated the shift in the balance of power towards China.

China has also suffered enormous reputational damage through the COVID-19 years. It insisted on expressions of gratitude from recipients of Chinese masks and personal protective equipment, blocked Taiwanese participation in the World Health Organization, and took coercive actions against Australia. Moreover, as Donald Trump withdrew the US from international organisations and agreements, China did not step up as a global leader on issues like climate change, refugees, and Myanmar. Xi wants China to become a great power so it can get its own way. He has a 19th century vision of a great power that includes spheres of influence. But the world has moved on since the 19th century, and other countries do not want to be part of his sphere of influence.

Indeed, when China acts in this way, it gets the opposite results. Instead of achieving submission and compliance, China got resistance, of which Australia is the most illustrative example. Economy argues that Xi doesn’t understand what soft power is – he seems to believe that it can be controlled by the government rather than emerging organically from society. In sum, Economy argues that China’s behaviour during the COVID-19 years undermined its ambitions to become a truly great leader for the 21st century. And while one may lament the polarisation of American society and politics, Economy argues that China is just as polarised as the US, if not more so, across gender and ethnic lines, through economic inequality, and the “war” between ultra-nationalist conservatives and the creative and intellectual liberal class.

While Xi’s vision, values, and motivations resonate with a great deal of Chinese people, not everyone in China agrees with Xi’s approach. Indeed, there have been reports of CCP elders blocking some of Xi’s proposed changes to the party’s revised constitution adopted at the Congress. The amendment does not include a phrase about “establishing” Xi’s core position in the party nor one about “establishing” the guiding role of Xi’s eponymous ideology.

Economy’s book is just one of a veritable slew of books recently published on China’s international and domestic politics. It also covers much territory that would be familiar to China watchers. That said, it is very well written and argued, and brings together a host of interesting information and perspectives, substantially drawn from her wide circle of China contacts.

- Elizabeth C. Economy. The World According to China.