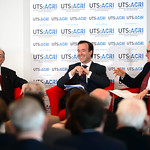 Curran, a professor of modern history at the University of Sydney, focuses on Australia’s prime ministers who have played an outsized role in leading the country’s relationship with China. Prime Ministers BenChifley and Robert Menzies were inclined to follow the British lead when it recognised the People’s Republic of China as the legitimate government of China in 1950. But ultimately Menzies deferred to the American position of treating the Taiwanese government as the legitimate government of all of China.

The major turning point in the Australia-China relationship came from Gough Whitlam, writes Curran. While leader of the Labor Party opposition, he visited China in 1971. In December 1972, as one of the first acts of his new government, he recognised the People’s Republic of China as the legitimate government of China. In 1973, he became the first Australian prime minister to visit China. Whitlam’s view was that China is a power that Australia would have to live with.

After demonising Whitlam for his China policy, Malcolm Fraser, upon becoming Australia’s prime minister in 1975, visited China prior to going to Washington or London, without checking with Washington first. Fraser believed that the US and Britain should no longer be the sole focus of Australia’s foreign policy. He saw the potential for China to help contain Soviet communism.

From 1983, Bob Hawke’s Labor government would usher in the golden era in the China-Australia relationship, according to Curran. Hawke struck up very close relations with China’s two reformist leaders of the time, Hu Yaobang and Zhao Ziyang. It is even said that Hawke had better access to the Chinese leadership than Ronald Reagan.

The 1989 Tiananmen Square massacre signalled the end of this period in Australia-China relations. This incident was symbolised by Hawke breaking down in tears on the nation’s televisions as he described the massacre. Hawke then offered asylum to some 42,000 Chinese students. But the relationship recovered quickly. Australia could not just walk away from China like the Europeans could. It has to live with China.

When Prime Minister Paul Keating visited China in 1993, the relationship was very much about developing business. As the Chinese economy was taking off in the mid-1990s, defence planners in Canberra started analysing what this could mean for China’s military capability. This was the beginning of Australia’s “China threat” debate. Keating himself was concerned about a military threat from China. This motivated him to sign a security agreement with Indonesia, with similar language to the ANZUS treaty, according to Curran.

Relations between China and John Howard’s Liberal government got off to a rocky start as Howard met with the Dalai Lama, and the mayor of Taipei visited Australia. But then Howard enjoyed a dream run as Australia’s trade with China boomed, and China’s foreign policy adhered to Deng Xiaoping’s wisdom of “hide your capacities, bide your time.” Howard even had Presidents Hu Jintao and George W. Bush address the Australian Parliament on successive days. Howard believed that Australia did not need to make a choice between China, its chief economic partner,- and the US, it’s chief security partner.

As a Mandarin speaker and former diplomat, Kevin Rudd was the most qualified Western leader to manage relations with China, writes Curran. Rudd believed that he could develop a new relationship based on being a “friend who could criticise.” But when he uttered this in a speech to students at Peking University, even before meeting with Chinese leaders, the latter took great offense. Relations then quickly went downhill. Rudd was also notable for leading the drafting of a Defense white paper which canvassed scenarios of war with China!

Under Liberal prime ministers Tony Abbott and Malcolm Turnbull, relations continued to deteriorate. Abbott reportedly told Angela Merkel that Australia was motivated by “greed and fear” in its relations with China. In 2017, as China was engaging in foreign interference in domestic politics around the world, Turnbull implemented legislation on foreign interference in the Australian Parliament, something which goes down like a lead balloon with China.

It was under the Liberal government of Scott Morrison that Australia-China relations hit their nadir. When the Australian government called for an independent, international enquiry into the origins of COVID-19, armed with agents like UN-style weapon inspectors, the Chinese government responded with widespread trade sanctions, and a list of 14 demands of Australia.

Curran emphasises that the new Labor government under Prime Minister Anthony Albanese, with its minister for foreign affairs, Penny Wong, has dialled down the rhetoric and is attempting a reset with the Chinese government. While China had previously frozen high-level contacts between the two governments, Chinese Premier Li Keqiang sent a message of congratulations to Albanese, and Wong has already met with Chinese Foreign Minister Wang Yi. Both governments are now talking, but there has been no resolution to outstanding issues. Trade sanctions are still in place, and two Australian citizens remain arbitrarily detained in Chinese prisons.

Where to next? Curran sees virtually no hope in Australia-China relations returning to the halcyon days under Prime Ministers Hawke and Howard. We are now living in a period of great strategic uncertainty. Xi’s China believes that the US and the West are in decline. Australia’s anxiety over China’s rise and assertive behaviour coincides with the polarisation and dysfunction in the American political system.

Nevertheless, both of Australia’s major political parties are committed to the US alliance and US leadership in Asia and would give some form of support to the US if there were a military contingency over Taiwan – otherwise the alliance would be dead and buried, according to Curran. But as the US is calling on allies and partners to contribute more, Australia has greater scope to shape the order in the Indo-Pacific. Curran argues that Australia’s diplomacy should be more creative in responding to Xi’s China, as it was during earlier episodes in the relationship.

In sum, successful management of the Australia-China relationship requires an understanding of its history, and Curran’s book provides an excellent offering of this history. The book would, however, have benefited from some comparisons with other countries’ China odysseys. In this context, Japan is often considered to be a comparator, as it also has an alliance with the US and a high economic dependence on China – but Japan has managed to avoid conflictual relations with China in more recent years.

This book review by John West was first published on 14 October 2022 by the Australian Institute of International Affairs' blog, Australian Outlook.