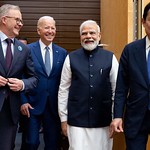 Whither the Asian Century?

After the destruction of WWII, Japan led Asia’s renaissance, followed by South Korea, Taiwan, Hong Kong and Singapore. Southeast Asia, China and India then took over the reins. Today, according to some measures, China would have the world’s largest economy, while India has the third largest (after the USA). Japan comes in fourth and Indonesia seventh.

Australia has been able to surf the wave of Asia’s ascendancy by exporting mineral and energy resources, and agricultural products. And, as middle class societies have expanded, Australia has been able to attract large numbers of Asian students and tourists. The promise of Asia continuing to drive Australia’s prosperity was reflected in the government’s 2012 White Paper on the Asian Century. Then Prime Minister Julia Gillard declared, ‘Whatever this century brings, it will bring Asia’s return to global leadership, Asia’s rise’.

Nevertheless, in my book, Asian Century…on a Knife-edge: A 360 Degree Analysis of Asia's Recent Economic Development (2018), I question the ‘Asian Century hype’ of the time. While Asia’s rapid development was impressive, other than Singapore, no Asian economy had caught up with world leaders like the USA and Germany in terms of GDP per capita.

Indeed, Japan with its rapidly ageing population has fallen into a stagnation trap. And countries like Korea, Taiwan and China are heading in the same direction. For their part, India and Indonesia may seem impressively large economies, but their large size is driven by their enormous populations rather than economic sophistication. Moreover, today, Asia is being hit hard by the food and energy price hikes resulting from the Ukraine war. Perhaps most importantly, while Asia is a geographical unit, it is not in any way a cohesive political group of countries. Severe historical grievances persist between Japan and some of its neighbours, and also between India and Pakistan.

Under its present leader, Xi Jinping, China believes its time has come to resume the mantle of Asia’s great power, much to the chagrin of the USA, which has led East Asia since WWII, and democratic countries like Japan, South Korea, Taiwan, India and Australia. Indeed, fierce rivalry between the USA and China means their relations are at their lowest ebb in decades, even though the USA is still by far the most important destination for Chinese exports.

China’s rise to Asian leadership had seemed unstoppable. It is now the leading trading partner of virtually all Asian countries – China accounted for one-third of Australian exports just prior to Covid-19. China has also established the Asian Infrastructure Investment Bank, and the Belt and Road Initiative to foster infrastructure and economic partnerships across Asia. Although China was the origin of Covid-19, for a long while it seemed to have kept case and death numbers well under control – in contrast to the shambolic performances of the USA and many European countries.

But today, as I write, the Chinese behemoth may be coming unstuck. International trust in China has been severely damaged by its sanctions against Australia for calling for an independent, international enquiry into the origins of Covid-19. The often predatory nature of ‘Chinese partnerships’ is in full evidence in Sri Lanka and Pakistan, which are now lumbered with enormous debts, very little useful infrastructure, and political instability. The Solomon Islands and other Pacific states should take note!

Moreover, China’s economy may be heading towards troubled times. For many years, China has kept its economy afloat by infrastructure spending resulting in enormous debt. The heavy hand of the state on the economy has adverse effects on productivity and innovation. And China’s ageing population is pushing the country over a demographic cliff. By the end of the century, its population could be less than half its current level of 1.4 billion.

Does this mean that the USA could remain the leading power in the Indo-Pacific? The USA has, in fact, been working to balance China’s rise through the Quadrilateral Security Dialogue with Australia, India and Japan, the AUKUS security pact with Australia and the UK, and the brand new Indo-Pacific Economic Framework for Prosperity.

But America’s polarised society and polity, and the scars of the wars in Afghanistan and Iraq, have undermined its appetite for international leadership. Moreover, American foreign policy can swing abruptly from one administration to another.

Where does all this leave Australia? We may now be heading towards the most challenging period of the post WWII period – a period of weak American leadership, continued assertive behaviour by China, and insufficient action to address the existential global challenges like climate change and nuclear proliferation. Australia will need exceptionally smart leadership and a good dose of luck to navigate these troubled waters.

This article by John West was first published by THE UNION, UNIVERSITY & SCHOOLS CLUB OF SYDNEY
Tags: asia