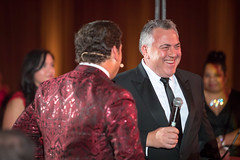 Our man in Washington

Between telephone tantrums and a tee off make-up, Joe Hockey revelled as Australia’s ambassador to the United States.
In September 2015, Malcolm Turnbull toppled Tony Abbott as leader of Australia’s Liberal party, and consequently as the country’s prime minister. Turnbull immediately told Joe Hockey that he could no longer be treasurer, that most sought-after job was promised to Scott Morrison. But he did offer Hockey the choice of any other role.

That’s how Hockey became Australia’s ambassador to the United States, following in the footsteps of a string of other political castaways, including predecessors Kim Beazley, a former Labor leader, as well as Andrew Peacock, a former Liberal leader. Hockey would hold the ambassador position from January 2016 to January 2020. He’d left behind Australian politics declaring he’d only have been consumed by “getting even” had he stayed in parliament. But little would Hockey have expected the extraordinary personality dynamics he would need to navigate in Washington.

Hockey recounts in his insightful and entertaining memoir Diplomatic that his time in Washington was anything but a glorified holiday. The post of Australian ambassador to the United States would seem like a nice sinecure, and Hockey concedes the ambassador’s official residence in Washington is quite luxurious with a splendid wine cellar. But the work was consuming.

Hockey arrived at the beginning of the last year of the tiring Obama presidency. Despite the closest of relationships between the two countries, Hockey initially struggled to secure high-level meetings for the simple reason that the United States had “no issues with Australia” – “it’s the squeaky door that gets the oil”, according to national security advisor, Susan Rice. So Hockey initiated a PR campaign based on “100 Years of Mateship” to incite greater interest in the relationship – a campaign criticised at home in Australia for its hackneyed history and lack of racial or gender diversity, although defended by Hockey for winning attention in Washington, particularly in Congress.

Hockey has peppered his book with inside stories that give the reader insights into the workings of high-level diplomacy. Hockey’s advantage as a storyteller over that of professional diplomats is his intimate knowledge of the political context. He reveals, for example, that while he was still treasurer, Barack Obama once asked Abbott and Hockey to stop selling iron ore to China – an amazing request given the cost involved, and one they flatly refused because it would “trash our economy”.

When Hockey had arrived in Washington in 2016, America was in the middle of a presidential election campaign in which all the Washington commentariat were convinced that Donald Trump had no hope against Democratic candidate Hillary Clinton. But Hockey could sense that there was another reality beyond the arrogance of the cities. Trump was giving voice to people who were disenfranchised. So Hockey told his staff to get out and visit the country, and listen to people. They came to believe that Trump could win, and Hockey himself believed that he would win. According to Hockey, Trump’s most valuable asset was his perceived authenticity.

When Hockey made contact with the Trump campaign, “Canberra went nuts”, he writes, with a deputy secretary saying that perhaps he “shouldn’t even be in Washington”. And when Trump did win, Hockey was able to get Trump’s telephone number through “his mate” and Australian golf great, Greg Norman, a golfing friend of the president-elect. This enabled Turnbull to make an early congratulatory telephone call at a time the world was in shock over Trump’s victory.

But that first phone call was soon overshadowed by the infamous exchange a few months later in February 2017 between Trump and Turnbull over a deal brokered with the Obama administration for the United States to accept refugees held by Australia. Against the wishes of Canberra, Hockey visited Trump’s staff at the White House and successfully made the case for honouring the refugee deal and putting the relationship back on the rails. Hockey managed to become an occasional golfing partner of Donald Trump thanks to a “mate” he befriended, Mick Mulvaney, who was director of the Office of Management and Budget and then became Trump’s chief of staff. And when Hockey leaked his golfing exploits to the media, suddenly all doors opened in Washington. Hockey regards avoiding US tariffs on Australian steel and aluminium as “one of my greatest victories as ambassador”. While Turnbull worked on Trump personally, Hockey “pushed hard into the White House and the rest of the administration” emphasising “mateship and our shared military history”.

But other traps awaited Australia. When Alexander Downer, at the time Australian High Commissioner to the United Kingdom, reported to US officials his meeting with George Papadopoulos, who “had been presenting himself around London as Donald Trump’s campaign advisor on foreign affairs”, this would propel a controversy to consume much of the Trump term in office. Papadopoulos had claimed a dirt file on Hillary Clinton would soon be dumped, and Downer’s report of the meeting would be seen as key to special counsel Robert Mueller’s investigation into Russian interference in the 2016 presidential election.

Needless to say, Trump was furious at Australia. Hockey ultimately defused the situation with Trump by releasing the diplomatic cables on the Downer and Papadopoulos meeting, and all other relevant information, to Attorney General William Barr who had been asked by Trump to run a “counter investigation”. But then Hockey also had to formally reject claims by Senator Lindsey Graham, chair of the Senate Committee of the Judiciary, regarding the role of Downer.

Memoirs such as Hockey’s invariably paint their authors in a positive light. But the experience he tells of does highlight the advantage for Australia’s representative in Washington in having political heft, and that Hockey was perhaps the right person for the job during such turbulent times.

This article by John West was first published by the Interpreter of the Lowy Institute, on 23 June 2022.