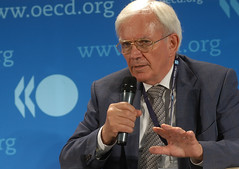 Dancing Before Storms: Five revolutions that changed the world

Five political revolutions, from the American revolution to the Russian revolution, offer lessons on how to manage the forces of political, economic and social change, according to Robert T. Harris.
John Lennon of the Beatles once sang “You say you want a revolution. Well, you know, We all want to change the world”. And in a new book, Robert T. Harris, a well-known spokesperson for civil society and the trade union movement, argues that today the world is indeed primed for a new revolution, or revolutions, that will upset the existing order.

But it is a ride that provides important insights for the world of today. As Harris argues, “History never precisely repeats itself, and history does not predict the future. Nevertheless, history provides lessons which may inform the present.” For example, the story of five revolutions shows how growing inequality and the dashing of aspirations for the majority of people, combined with serial scandals, created pre-conditions for revolution. Thus, Harris quotes Harvard philosopher George Santayana – “Those who cannot remember the past are condemned to repeat it.”

Much ink has been spilt over the years analysing these five revolutions. But Harris’ narrative may be unique in that it sees parallels and linkages between the five revolutions, which are typically analysed in isolation. Moreover, he focuses on the influence of five individuals – one for each revolution – who were active participants in the political struggles of their times. Harris argues that Benjamin Franklin, Jacques Necker, Alphonse de Lamartine, Kang You Wei, and Pyotr Stolypin each exercised their considerable powers to try to change the course of events, but failed to prevent the storms of revolution. Entrenched elites were tragically “dancing before storms”.

In other words, none of these revolutions were inevitable. With much greater wisdom from political leaders they could have been prevented. Harris argues that the road to peaceful change is paved with obstacles – “Overcoming vested interests and the natural propensity of people to deny the writing on the wall can make the task of rational reform extraordinarily difficult”.

Harris argues that these five revolutions set the scene for the dramatic changes and conflicts of the next 100 years. Indeed, the past century may have been the most tumultuous in human history. World Wars. Great Depression. Discoveries of nuclear fission and fusion. Decolonisation in Africa, Asia and Latin America. The division of Europe by an iron curtain. The Cold War, followed by the collapse of the Soviet Union. Creation and expansion of the European Union. Genocides. Long drawn-out wars in Africa, Asia and the Middle East. Global supply chains. Financial crises. Advent of the Internet.

And this hectic history has only continued into the 21st century, with a global financial crisis, the urgent challenge of climate change, great power competition between the US and China, the reemergence of Russia as a rogue state, the presidency of Donald Trump, Brexit, the riotous invasion of the Capitol Building in Washington, and COVID-19. In discussing the new millennium, Harris introduces us to a sixth key personality, the Nobel prize-winning Secretary-General of the United Nations, Kofi Annan, who brought a spirit of hope to the world at the dawn of the new millennium. But this hope was sadly extinguished by the 9/11 terrorist attacks of 2001 and the 2008/9 global financial crisis.

Harris proposes four lessons from his examination of these revolutions. First, “when imbalances develop in a society – at any level, local, national, or global – a point will be reached when that society will become unstable”. Second, “no one can predict when and how a tipping point will occur. In each of the revolutions described, conditions had been building for decades". A quotation attributed to Aristotle in the time of the ancient Greeks states: ‘Revolutions are not about trifles, but spring from trifles.’

Third, “not every uprising becomes a fully-fledged revolution straight away”. Fourth, “When revolutions became more than uprisings, when the structures of societies were overturned, the consequences were rarely predictable, but always far-reaching”. The American revolutionaries could hardly have imagined the civil war of epic proportions in the nineteenth century.

Harris argues the key underlying lesson from these five revolutions is that human beings have a great capacity for denial. In each of the stories of the five revolutions, the elites of the day refused to admit the prospect that their privileges and lifestyles could be swept away by the storms of revolution. Much of his narrative is about denial, even in the face of ample warnings, and despite the efforts of people who were for a time in positions of great power and influence.

Harris concludes that all the signs for revolution are present today – rising inequality, elite corruption, burgeoning climate change, social unrest, anti-migration sentiments and xenophobia, a growing sense of injustice within many societies, and declining trust in political processes and institutions. And he argues that Covid-19 has significantly increased the odds that earth shaking upheavals are still to come.

Like virtually every publication, Harris’ new book already needs updating, even though it has only just been published. If he were writing today, he may have included as further warnings of possible revolutions things like Russia’s invasion of Ukraine and the unrest in Shanghai as President Xi Jinping buckles down in his attempt to eliminate COVID-19 in China.

If there is one shortcoming in Harris’ book, it is that he does not concede that revolutions can at times be effective and unavoidably necessary ways to bring about political and social change. Further, he does not speculate as to where, how and in what form a future revolution might take place. In his defence, however, such speculations are immensely difficult to undertake with any rigour.

Overall, “Dancing Before Storms” is a splendid book, full of fascinating analysis and thought-provoking ideas. It is a poignant reminder that “black swan” events are all too frequent through history, and that political myopia and complacency are perhaps the greatest enemies that comfortably prosperous Western countries must contend with.