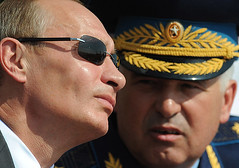 Catherine Belton’s book, Putin’s People, is of great interest as it provides well-researched and troubling insights into the nature of Russian politics on the eve of the invasion.
How can we understand Russia’s invasion of Ukraine? What does it reveal about the regime of President Vladimir Putin and Russia’s possible future? To this end, there may be no better aid than Catherine Belton’s book, Putin’s People – How the KGB Took Back Russia and Then Took On the West, published in June 2020.

Belton argues that “the kleptocracy of the Putin era was aimed at something more than just filling the pockets of the president’s friends … the KGB takeover of the economy – and the country’s political and legal system – was a regime in which billions of dollars at Putin’s cronies’ disposal were to be actively used to undermine and corrupt the institutions and democracies of the West.”

The Putin story commences in Dresden, in the former East Germany, where he was working as a KGB agent. But according to Belton, an investigative reporter for Reuters and previously Moscow correspondent for the Financial Times, Putin was not just a low-level functionary in a Cold War backwater, as widely believed. Rather, he was on the front line in undermining the West – through terrorist networks, smuggling high-tech, and money laundering. And as the KGB could see that the writing was on the wall for communist economic planning, in Dresden they were siphoning off vast sums from the dwindling economy to ensure the survival of their networks at home and abroad.

In 1991, Putin moved back to his hometown of Saint Petersburg where he became deputy mayor. The 1990s were the chaotic years of the Yeltsin administration, with the rise of oligarchs who benefited from corrupt privatisations. But former KGB officer (“siloviki”) networks did not disappear, they were biding their time in the background. Putin worked with the siloviki and local criminal groups to hand out export licenses, build front companies, and create slush funds in order to funnel “black money” overseas to trusted custodians, friendly firms, and intermediaries. Belton writes that St. Petersburg’s port “became ground zero for an alliance between the KGB and organised crime.”

Putin moved to Moscow in 1996, quickly rising through the ranks at the Kremlin. Following Russia’s 1998 financial crisis, the siloviki launched an attack against the corruption and scandals of President Boris Yeltsin, his family, advisors, and oligarchs. Fearing a restoration of the Communist Party, Yeltsin turned to the siloviki and Putin, who was nominated to succeed the ailing Yeltsin as president in 2000 – with the promise that the interests of Yeltsin and his entourage would be protected.

Then followed a progressive and systemic power grab by the siloviki around Putin in the Kremlin. Government officials from the Yeltsin era were gradually jettisoned. Putin cowed the Yeltsin-era oligarchs as he jailed the richest and most powerful one, Mikhail Khodorkovsky, for ten years and then took over his oil company, Yukos. Putin put his loyal allies in charge of most strategic sectors of the economy. And the law enforcement and court system fell under the siloviki.

In short, Putin and his people achieved control of everything in Russia. He made himself and his cronies rich, and created an unaccountable slush fund of dirty money to maintain control at home and undermine and corrupt the West. For the siloviki, the Cold War never ended. But according to Belton, Putin would be essentially a front man in the group of siloviki who came to power twenty years ago. It is a story of Russia’s siloviki deep state seizing the Kremlin and running the country like a crime syndicate.

When Putin came to power, he made overtures to the West and opened Central Asia as a transit corridor for the US at the start of the Afghan war. He was expecting something in return, which he never received. The US continued to treat Russia as an economic basket case. Putin believed that Russia is entitled to be a great power, in light of all the sacrifices of World War II. Belton argues that the West should have been more open to hearing Russia’s concerns. In short, there have been mistakes on both sides of the relationship. That said, while Putin and his people may be formidable adversaries of the West, they are also incompetent economic managers who have kept their country an economic basket case, despite its immense potential. “KGB-capitalism” doesn’t work.

As brilliant as Putin and his people seemed in seizing power, it has long been a fragile regime. Putin was rattled by the mass street protests in 2011/13 against his regime, as well as Ukraine’s 2004 Orange Revolution and the 2014 Euromaidan Revolution, which he saw as being motivated by Western plots to topple his regime. For its part, Putin’s Russia showed its complete disregard for international rule of law in 2014 by invading Crimea, a part of Ukraine, in contravention of the 1994 Budapest Memorandum on Security Assurances which Yeltsin had signed.

Further, Russia’s middle classes are turning against Putin, according to more recent accounts from Belton. The more liberal, moderate Moscow elite had been co-opted and forced to adapt to Putin’s people. Belton argues however that their compliance is waning. Indeed, we have reached a point of inflection due to persistent economic weakness and the Kremlin’s seizure of a whole string of businesses and banks in recent years. Many of these Russians do not share Putin’s vision of returning Russia to great power status and attacking the West, which he still sees as the main adversary. She also saw growing paranoia of the regime, notably in the poisoning and jailing of Alexei Navalny.

Belton also reserves much criticism for the West, which did not see the asset grab by Putin’s cronies for what it is, “strategic corruption,” which finances a perverse form of foreign policy and political warfare. Putin’s people used their wealth as a means to undermine and disrupt the Western institutions and democracies, and buy off its officials, while Western business and financiers collaborated in the process.

Today, Putin’s sole ambition is to hold onto power, according to Belton. In other words, Putin must believe that invading Ukraine improves his grip on power. But he would seem to be failing his sole ambition on all scores. In seeking to explain Putin’s actions, Belton recently suggested that Putin has changed during the past two years of the pandemic, as he has become increasingly isolated, consumed by history and his place as the restorer of the Russian lands, and has lost touch with reality. She hopes that this war will lead to his toppling.

At over 600 pages and packed with detailed technicalities and other information, Putin’s People doesn’t make for light reading. But this reader believes that this book offers the best assessment of the state of Russia on the eve of its invasion of Ukraine.

This article by John West was first published by the Australian Institute of International Affairs on 28 March 2022.

- John West. Book Review: Putin’s People – How the KGB Took Back Russia and Then Took On the West. Australian Outlook, 28 March 2022.

- Catherine Belton. Putin's People -- How the KGB Took Back Russia and Then Took On the West