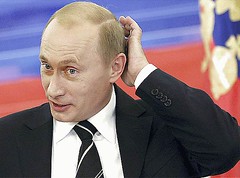 Whether you believe that the Ukrainians and Russians are one people, as Vladimir Putin does, or that they are distinct nations as most Ukrainians do, they are certainly very close cultural cousins. In this sense, the terrible carnage from the Russian invasion amounts to fratricide. As literally millions of Ukrainians are either killed or forced to flee their homes and country, it is also a case of ethnic cleansing. And the immense damage inflicted on beautiful Ukrainian cities and towns will also amount to cultural genocide. These are surely crimes against humanity.

Putin’s war is one that was in many ways always difficult to win. As the unfolding evidence shows, Putin greatly underestimated the military capabilities and resistance of the Ukrainians, as much as he overestimated the capacity of his own military. But even if Russia does manage to defeat the Ukrainians, holding the country and governing it will be an immense challenge – especially in light of the prospects of continued urban guerrilla insurgency. If there was ever any doubt about the existence of a Ukrainian nation, such doubts have been extinguished by the bravery and courage of the Ukrainian people.

Putin also clearly underestimated the reaction of the West, especially Germany’s positive turnaround on military expenditure. Even Switzerland has abandoned its longstanding neutrality. True, the West has not directly intervened militarily in the war. But the reaction of the West has been immense, notably through vast sanctions and the provision of arms and intelligence to Ukraine. A long-divided West, especially NATO, is now more united than ever. One surprising development has been the rise of “private sanctions”, as many private companies withdraw from or refuse to do business with Russia. Put together, these sanctions are breaking the Russian economy and unfortunately the sufferers will be the ordinary Russian people. In light of all of these actions, Putin surely believes that NATO has de facto declared war on Russia.

Putin has long been admired, especially by the nationalist right-wing in Western countries, for being a brilliant dictator. These admirers were prepared to overlook the costs of his dictatorship, notably murderous intervention in countries like the UK, kleptocracy, repression and information wars. Any illusions about Putin’s brilliance must now be dispelled as gross misjudgements. For people looking for historical analogies, there is only one, that being Adolf Hitler.

Did the West provoke Putin’s invasion of Ukraine?

Some Western analysts, like the former Secretary-General of the Paris-based Organisation for Economic Cooperation and Development, Donald Johnston, argue that the West is ultimately responsible for Russia’s actions. They say the West failed to engage effectively with a democratic Russia after the fall of the Berlin Wall, thereby leaving Russia’s fragile, nascent democracy vulnerable to Vladimir Putin and the country’s rapacious oligarchs. It is possible that a “Marshall Plan for Russia” may have been helpful. But as the cases of China and many Asian countries have shown, strong domestic policies and institutions are the key to economic transformation and modernisation, not foreign aid.

Other Western analysts, led by the University of Chicago’s Professor John Mearsheimer, argue that the US and NATO have provoked a hostile reaction from Putin’s Russia by admitting former Soviet Union states or satellites into NATO. They contend that there was an agreement between former Soviet leader Mikhail Gorbachev and US President George H.W. Bush that NATO will not expand beyond the frontiers of a reunified Germany. Thus, next US President, Bill Clinton, and his successors have defied that agreement when they admitted into NATO a string of central and eastern European countries, starting in 1999.

But this argument does not hold up. As Australian geopolitical analyst Henry Ergas has argued convincingly that there never was such an agreement and NATO was no trigger for Putin’s invasion. In fact, NATO can never be a military threat to Russia which is a nuclear state.

More fundamentally, this argument overlooks the fact that while NATO was expanding its membership, Vladimir Putin himself signed the Rome Declaration in 2002 to develop a pragmatic NATO-Russia relationship that reportedly generated some positive outcomes. When Putin reacted violently to NATO’s 2008 announcement that Ukraine and Georgia “will become members”, he demonstrated that Russia did not respect the sovereignty of these new nations, despite Russia’s positive cooperation with NATO.

While the West may not have directly provoked Russia’s invasion of Ukraine, it has most certainly facilitated Putin’s kleptocracy. True, the West has implemented sanctions following Russia’s invasion of Crimea, its interference in the 2016 US election campaign, and its murders and use of chemical weapons on British soil.

But as Larry Diamond argues, the West has been “pulling its punches”. Sanctions have been weakly enforced. Today, London, mockingly referred to as “Londongrad”, is a haven for Russian money laundering. What is even more reprehensible is that some former European politicians have been working for politically-connected Russian companies, and golden visas and passports have been granted to suspiciously wealthy Russians by many Western countries.

Robert Person and Michael McFaul argue that in reality Putin doesn’t worry about NATO. “What terrifies him is the prospect of a flourishing Ukrainian democracy”. They contend that Putin has fabricated this crisis about NATO expansion in order to undermine Ukrainian democracy. Putin feels threatened by the possible example of a successful and prosperous democracy in Ukraine on Russia’s borders, something the Ukrainian people have been willing to fight for.

This will undermine the Kremlin’s own regime stability by showing Russian citizens the moral bankruptcy of Russian governance. Putin has every reason to worry about democracy, as Diamond has argued more recently: “No country has witnessed the marriage of autocracy and kleptocracy on a more staggering scale than Russia, where an increasingly fearful and despotic ruler, now more than two decades in power, has amassed one of the world’s largest personal fortunes”.

There is even suggestion that after two years of COVID-19 lockdowns Putin may have lost touch with reality, and bitten off much more than he can chew. He could thus be an ageing lonely tyrant. It may also be that as he’s gotten away with outrageous behaviour in the past, he thought that he can do so again. Analysts will no doubt be debating for many years to come the real causes of Putin’s invasion, and we may never really know the answer.

Some preliminary lessons for the West

Today, the Ukraine war is far from finished, and will likely get worse and more bloody before it gets resolved, with speculation that Russia might employ nuclear, biological or chemical weapons. The conflict might even drag out for a long time into a stalemate, and pull in other countries. But it is not too early for the West to be drawing lessons from the war.

Following the end of the Cold War, the West lived under an illusion that economic openness through trade and investment with nascent democracies and authoritarian regimes will foster political openness, democratic consolidation and encourage these countries to become responsible stakeholders in the US-led, rules-based world order. This was clearly a naive, pious hope.

Moreover, the West clearly underestimated several other factors, such as: the risks of economic dependence on authoritarian regimes, like Europe’s dependence on Russian energy; the potential for trade and investment to be used as tools of economic coercion, especially by large countries against smaller countries; the risks to Western security interests from current and former Western politicians defending and working for authoritarian regimes; and the willingness of the West’s finance industry to collaborate with financial criminals in countries like Russia and China.

As German Chancellor Olaf Scholz said, “We are living through a watershed era. And that means that the world afterwards will no longer be the same as the world before.” In short, the peace dividend of the post-Cold War era is over, and Europe will have to take its own defence and national security more seriously. Indeed, the new world order may be fractured between democratic and authoritarian regimes, and economic policies will have to closely factor into account security issues to an extent not seen since the Cold War. Above all, Western countries must maintain strong solidarity once the crisis has passed, as tempting as it is for countries to go their own way.

This article by John West was first published by "Unravel" on 15 March 2022.