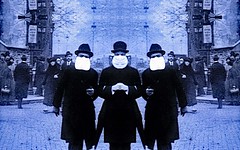 COVID-19 – parallels and lessons from the “Spanish Flu”

While there may be some parallels and lessons from the “Spanish Flu” for COVID-19, the reality is that all viruses are different beasts, with different trajectories.
So here we are, at the beginning of another new year, 2022, and the beginning of our third year with COVID-19. And yet, despite all of our hopes, there is no end in sight, as the new Omicron variant ravages our countries.

At Christmas in France, where I am now residing, we were greeted by record numbers of new cases. In Australia, my home country, which just a few months ago seemed to have mastered control of COVID, numbers are off the charts. And most of these statistics are likely underestimated, as testing facilities are overwhelmed in these countries. By contrast, India now has very low case numbers, after the sharp spike in May.

COVID was supposed to dissipate gradually over time. But this is clearly not happening yet in Western countries. And while authorities insist that vaccine boosters (the third vaccine dose) are essential to be well protected against Omicron, the booster campaign is running too slowly in France and Australia. And India, like most emerging economies, has low vaccination rates, with only 43 percent having two doses, and little talk of boosters. This provides fertile ground for even more new variants.

The only straw that we can clutch at is that Omicron seems less lethal than the Delta variant that it is replacing. But even if it is less lethal, with record cases numbers health systems are being overwhelmed.

Casual discussions about COVID often turn to parallels and lessons from the “Spanish Flu” of one century ago, on which many of my friends and acquaintances seem to have become self-appointed experts.


What do we know about the “Spanish Flu”?

The first thing to note is that the so-called Spanish Flu did not come from Spain. The first cases were detected among US soldiers in Kansas in 1918, although it may have originated in China, the source of many lethal viruses. Why was it dubbed the Spanish flu? The flu emerged during the last year of World War 1 when belligerent countries were censoring the press. Thus, the first reports came from neutral Spain which gave the false impression that Spain was the epicentre, so the press outside Spain adopted the name "Spanish Flu”.

The Spanish Flu was much more lethal than COVID. It killed somewhere between 50 and 100 million people, much more than the 20 million deaths caused by World War 1, which it partly overlapped in time. Deaths from the Spanish Flu would be the equivalent of 225-450 million in today’s world with its much bigger population. This is enormously bigger than the official count of 5 ½ million deaths from COVID.

The victim profiles of the Spanish Flu and COVID are starkly different. The Spanish Flu killed mainly healthy young adults, with well over 90 percent of the excess mortality occurring in people younger than 65. The median age of death was mid- to late-20s. In high income countries, it is virtually the reverse for COVID with about 90 percent of deaths being for over 65s, although for middle income countries a much higher proportion of deaths – 40-55 percent – have been in the under 65 group, according to the World Bank.

Perhaps two-thirds of global deaths from the Spanish Flu occurred in a twelve week period between late September and late December 1918, with the disease ripping through communities in 6-8 weeks or even less. The Spanish Flu was a short and intense affair that came to a fairly quick end. COVID seems quite different, and would appear to be a long, drawn-out virus, with consequently a much greater impact on the economy.

The Spanish flu, being an influenza virus, mutated much faster than COVID, which is a coronavirus. It changed dramatically from the first wave in Spring 1918 to the second wave in autumn of that year, which was both more infectious and much more lethal. It changed again early in 1919, becoming somewhat milder. Even two years down the track, COVID mutations continue to generate major new variants – from Alpha to Beta to Delta to Omicron – and there is no sign of these mutations slowing down, although they may be becoming less lethal.

Historians like Niall Ferguson believe that our hyperconnected world is more vulnerable to the spread of viruses like COVID. But that may not be quite so. Without the help of airplanes, the Spanish Flu travelled from Kansas across the US, to Europe and ultimately around the whole world, with one-third of the world population being infected. For example, in Fiji 14 percent of the entire population died in 16 days, highlighting the impact of the Flu on virgin populations.

India, a long way from the US and Europe, was one of the countries most severely affected by the Spanish flu. It killed 11-14 million people in India, or 4.4 to 6.1 per cent of the Indian population, according to the National Bureau of Economic Research, Cambridge. Overall, case mortality in the West is estimated at around 2-2.5 percent, while it may have been 6-8 percent in the developing world, which had little or no prior exposure to seasonal influenza viruses.

What happened to the Spanish Flu? Following the third wave in March 1919, the Spanish Flu continued to mutate, becoming less deadly, causing only ordinary seasonal flu. The flu of today contains some of the genetic code of the Spanish Flu. Similarly, COVID may never go away, but just become less dangerous over time. One optimistic scenario is that COVID could follow the path of the 1889 pandemic (“Russian Flu”), which mutated into the coronavirus which causes the common cold today.


Some lessons from the “Spanish Flu”

There are a number of key lessons for us today, according to John M. Barry, author of The Great Influenza: The Story of the Deadliest Pandemic in History,

First, authorities must retain the public’s trust, to secure cooperation for responding to a pandemic. This means telling the cold hard truth, at all times. Denying the gravity of the situation, or painting a rosy picture so as not to frighten people only destroys trust, the currency of a well functioning society. In this context, politicians are not good spokespeople for communicating about pandemics. Honesty being the best policy may seem blindingly obvious, but even today our political leaders are still having trouble being honest, as they seek to put themselves in a good light and curry favour with their supporters.

Donald Trump had plenty of opportunities to be open and honest about COVID, of which he had early information about its gravity. But all he was worried about was his reelection campaign. In his case, President Woodrow Wilson and his administration minimised the Spanish flu, even telling lies, out of fear that the truth would demoralise the public and damage the nation’s effort in World War 1. The War was the only thing that mattered to Wilson. But as deaths piled up, trust in the government quickly dissipated. In 1918, people could die within 12 hours of the first symptoms.

Another clear lesson is that non-pharmaceutical interventions (NPI), like social distancing, proper ventilation, masks, hand-washing, and so forth actually work – notwithstanding widespread community resistance to and politicisation of NPIs. But this is where trust comes in. People will only cooperate, if they trust political leaders. This is essential, because until you get a vaccine, the only thing you have is NPIs.

Viruses like the Spanish Flu and COVID can have major political consequences. Mismanagement of COVID, and lack of leadership, likely caused Donald Trump’s election loss in 2020. It has also undermined the US’s credibility as a world leader. China’s coverup of the origins of COVID, and its wolf warrior diplomacy, have contributed to a major loss of international trust in China. While COVID highlighted today’s paucity of international political relations, international cooperation among scientists has been critical for the development of vaccines and treatments.

More profoundly, John Barry, suggests that the Spanish Flu may have contributed to the subsequent rise of Germany’s Nazi Party following World War 1, and arguably led to World War 2. Under the leadership of President Woodrow Wilson, the US entered the War on the principle of seeking "peace without victory", and did not want a punitive Peace Treaty.

But Wilson caught a serious case of the Spanish Flu during the Versailles peace talks, apparently suffered severe neurological damage, and, negotiating from his sick bed, caved into the tough demands of French Prime Minister Clemenceau, requiring Germany to accept responsibility for the War and pay reparations. British economist John Maynard Keynes called Wilson the greatest fraud on earth. While Wilson himself reportedly said that if he were a German he was not sure that he would sign this peace treaty.

John Barry’s book, published in 2004, became influential, following President George W.Bush’s reading of it. Bush instructed that a pandemic plan, which did not exist before, be elaborated for the US – regrettably this plan was not used by Trump. Moreover, he invested billions of dollars in research whose results underpin the development of mRNA vaccines, which are now being used to tackle COVID. The Spanish Flu stimulated a big boost in medical research and education, as COVID is doing now, especially for vaccines and viral therapies. This may have a significant impact on the scientific base of our societies and economies.

Having now read a lot of literature on COVID, one obvious thing that strikes me is that viruses are usually quite different from each other, and even each variant has different properties. Looking for simple parallels and analogies can be interesting, but they must be interpreted carefully. A short study of the world of viruses is quite humbling in that it demonstrates how fragile and vulnerable life is, even in our seemingly advanced high-tech world. But while we may not be masters of our environments, our high tech capabilities enabled us to quickly identify COVID, to sequence its genome, and to develop vaccines and treatments. And yet, technology is the motor of fake news which seeks to undermine our scientific and technological brilliance!

This article was first published by the Kootneeti on 3 January 2022.

- John M. Barry, The Great Influenza: The Story of the Deadliest Pandemic in History.